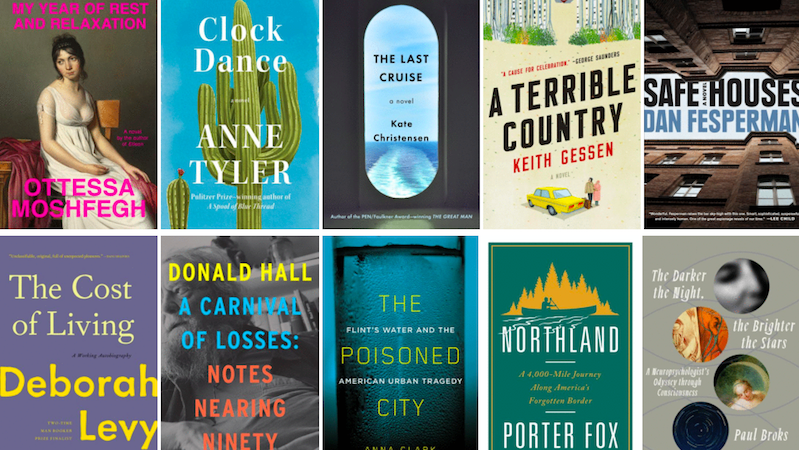 1. My Year of Rest and Relaxation by Ottessa Moshfegh

“Entirely pristine in its styling, Ottessa Moshfegh’s fourth book, My Year of Rest and Relaxation, opens with the phrase ‘Whenever I woke up . . .’ It is understated, implicit wording—the mild ‘whenever’ simultaneously pointing to no precise time and to various specific times. The words “I woke up” crackle with multiple meanings. Woke from a slumber; woke from a stupor; woke from ignorance; woke from delusion; emerged from grief; emerged revived. It all applies … [My Year of Rest and Relaxation] is not a complicated book, by which I mean it’s not intricately plotted or densely populated. The story, strictly speaking, never leaves the unnamed narrator’s fascinating, twisted, candid, perceptive mind … It’s really difficult to discuss the extraordinary mechanics of My Year of Rest and Relaxation… There’s a birth, a rebirth, yes, and it’s a substantial epiphany. But there’s loss too, because important things are lost in time when time is the enemy and obliviousness is the weapon.”

“Tyler’s 22nd novel brims with the qualities that have brought her legions of fans and high critical acclaim. Characters pulse with lifelikeness. The tone flickers between humorous relish and sardonic shrewdness. Dialogue crackles with authenticity. Beneath it all is an insistence that it’s never too soon to recognize how quickly life can speed by and never too late to make vitalizing changes. Unillusioned but uncynical, fascinated by family dynamics and the tension between independence and involvement, Clock Dance is a warmly appealing tale of timely recuperation.”

3. The Last Cruise by Kate Christensen

“Christensen is a discerning and witty writer … Having gathered these disparate people together, Christensen gently rolls and pitches the stage, dislodging stones of sadness that had been safely stuck in the crevices of their everyday lives. That discombobulation is the key to the story’s appeal, its unstable mix of romantic comedy, class oppression and spiritual angst … Christensen is a master at drawing us into the interior lives of her characters, toeing the line between satire and sympathy … Although that geopolitical metaphor is convincing, it would ultimately make for a rather schematic and dull story. Fortunately, Christensen has something more mysterious and existential in mind. She’s interested in the most intimate and profound changes we’re willing to make only when tossed by the tempest of life.”

4. A Terrible Country by Keith Gessen

“Gessen’s second novel, arrives like a cold, welcome wind … [A Terrible Country] is less a travelogue, or a guide to post-Soviet Russia, than it is a novel about life under neoliberalism—a political ideology that dictates that the market, not the state, rules the citizenry … [A Terrible Country] is a more mature work, written in pared-down prose noticeably different from the headlong style of the first novel. The sentences are simple and direct, as if subordinate clauses were the stuff of youth. The book is funny, but darkly so—many of the best jokes are about the protagonist’s disappointment in himself and in others … [A Terrible Country] is not exactly a hopeful book about political protest, but neither it is a fatalistic one. Instead, it suggests what resistance might mean, not as a slogan, but as a life.”

“In [Safe Houses], author Dan Fesperman superbly melds a character-strong espionage thriller with a suspenseful mystery that also aligns with the #MeToo movement. As a spy thriller, [Safe Houses] eschews high-tech gadgets to concentrate on the emotional and physical peril of undercover work. As a mystery, it quickly becomes a family drama … Fesperman supplies plenty of tense scenes, especially during Helen’s younger years, but his affinity for character studies is the novel’s driving force … Fesperman never allows his characterization to go over the top … [Safe Houses] is a superior thriller—both on the international and domestic front.”

1. The Cost of Living by Deborah Levy

“An astute observer of both the mundane and the inexplicable, Levy sketches memorable details in just a few strokes…What makes this book stand out, however, is that Levy doesn’t allow herself to linger over these details. There’s no stretching every moment to an unnecessarily prolonged beat … She’s like an expert rafter, and the river she travels is full of encounters and emotions. While another writer might give us a lengthy tour of this turbulent water, Levy doesn’t slow down. There’s joy in her maneuvering through the rapids, difficult though they may be. And there’s joy for us in watching her.”

2. A Carnival of Losses by Donald Hall

“A Carnival of Losses: Notes Nearing Ninety…it’s a freewheeling essay collection that’s a fitting coda to a distinguished career … Much in this collection is familiar, including stories about his grandparents’ 1803 New Hampshire house at Eagle Pond Farm, owned by his family since 1865 … Hall, who spent decades exploring the poetry of death, was sanguine about mortality. In A Carnival of Losses, he considered life’s roller coaster between desolation and joy … Hall may have reached his roundhouse but not before bequeathing readers with this moving valedictory gift.”

3. The Poisoned City: Flint’s Water and the American Urban Tragedy by Anna Clark

“In this meticulously annotated, brutally honest (she names names), and compassionately narrated account of a disgraceful American crisis, The Poisoned City: Flint’s Water and the American Urban Tragedy takes us from point A to point Z, showing and telling and explaining all that happened through the words of those who lived it…. a cautionary tale for every town and city across the land. Clark’s admonishments of ‘the toxic legacy of segregation, secession, redlining, and rebranding’ that disproportionately victimized low-income and minority groups and of the government officials who repeatedly said, ‘Trust us’ should be taken quite seriously, as well as her assertion that ‘[a]gencies charged with protecting public health and natural resources deserve to be well-funded, pro-active, and oriented solely toward serving the public interest.’ ”

“Northland is a respectable primer on the fraught ways history has been unkind, indeed criminal, to Indians. But it’s also a travelogue, complete with the adventures—and misadventures—of a man traversing what is, in many places, still absolute wilderness. Fox is an excellent guide, capturing the majesty of the Northland’s diverse geology, flora, weather and seasons … But Fox’s greatest accomplishment is that he uses all of the landscape and history to capture the people who live and work on the border now. Fishermen, ship’s captains and crews, canoe guides, Indian activists, militia members—each is brought to life with respect, and taken together they serve as an excellent portrait of the contemporary United States, and all the challenges we face.”

Read an excerpt from Northland here

5. The Darker the Night the Brighter the Stars by Paul Broks

“To understand what this book is really about you need to know the ending of the quote in the title…’The deeper the sorrow, the closer is God.’ Except that there is no God in this book, there are only terrible depths of grief, along with layer upon layer of neuroscience, philosophy, memoir, Greek myth and odd fictionalised encounters with — by way of two examples — a bereaved CS Lewis and an imaginary 90-year-old daughter who has uploaded her mind into a futuristic ‘hive’ … intolerably self-conscious and artful, as if no one should weave loss and neuroscience into such a clever pattern. I bridled occasionally. But I also cried until my throat stung and concluded that, as an exploration of love and loss, as a portrait of a person and of the nature of personhood, this book is about as true as any I have read.”