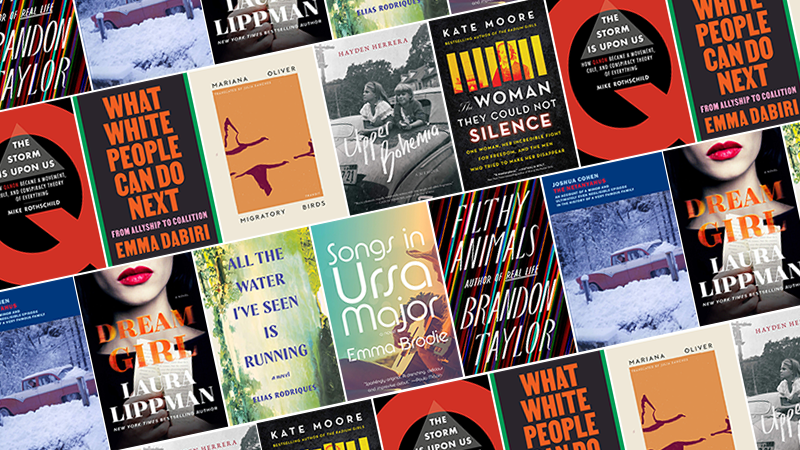 Brandon Taylor’s Filthy Animals, Joshua Cohen’s The Netanyahus, Laura Lippman’s Dream Girl, and Emma Dabiri’s What White People Can Do Next all feature among the Best Reviewed Books of the Week.

“[An] impressive first collection … Although each of the stories here can be read as a stand-alone work, over half of them are perhaps best described as chapters of a novella-length piece … the cloistered world of student life offers Taylor the perfect canvas for the emotionally charged interplay between an insular cast. Most significantly though, these stories provide further evidence that intimacy is Taylor’s great subject … moments of connection that pepper these stories feel so miraculous. But welcoming relief involves acknowledging the true depth of the void that’s been filled … Taylor also dares to show us how violence can be an act of terrible intimacy.”

2. The Netanyahus by Joshua Cohen
(New York Review of Books)

“Mr. Cohen has fictionalized the episode to brilliant effect, producing a novel that is in part a seriocomic portrayal of postwar American domesticity, in part an ideological origin story, and most of all a parable dramatizing the intra-tribal disputes that divided Jews in the wake of the Holocaust … Mr. Cohen proves himself not just America’s most perceptive and imaginative Jewish novelist, but one of its best novelists full stop.”

“In between the alarming and escalating events in the present day, Lippman takes us on an immersive tour of Gerry’s lonely and confusing childhood…and Gerry’s failures and successes as a writer, a husband, and a lover. Part of what rises palpably to the narrative surface—in scenes from the past as well as the present—is a life-long adherence to a certain level of self-deception on Gerry’s part … when events in the Baltimore penthouse take a more ominous turn, the novel pivots elegantly into an even darker—and darkly comic—crime novel. Lippman suffuses the book’s atmosphere with literary, cinematic and television touchstones … Positively humming with the vibrancy of a slew of crime-fiction authors during a high-energy drinking session, Dream Girl shimmers with suspense, surprises, wry humor, and an ever-present stream of appreciations for the pleasures, frustrations, and oddities inherent in the life of a writer.”

“This study of grief illuminates Daniel’s sense of himself, his family, and his communal identity … Rodriques writes with a dreaminess that reflects Daniel’s preoccupations with the intersection of memory and reality, past and present … The complex layering of class, race, gender, and sexuality within the group reminds us that all is at play in relationships. Rodriques’ striking debut expands the geography of regional literature and convincingly demands acknowledgment of under-explored perspectives.”

“The book is very much based on the love affair and mutual muse-hood of Joni Mitchell and James Taylor, leading lights of the folk-rock world and onetime residents of L.A.’s Edenic Laurel Canyon. But from the very start, it stretches out and becomes its own thing. Brodie works with big themes—individuation, mental illness, legacy, self-destruction and redemption—but her touch is lighter than an onshore breeze … Brodie, formerly an editor at Little, Brown, has a wicked knack for locating the tone of various music types: journalists, producers, A&R scouts and, of course, prodigiously talented singer-songwriters … You can tell when a novelist truly loves her heroes and despises her villains … But Ursa Major is plotted so tightly, its characters so vividly rendered, that you barely notice the author’s thumb on the scale … Songs in Ursa Major also weaves in a deep understanding of the connection between creativity and madness … There’s something about Ursa Major that suggests a mythology, a hero’s journey in which the hero is a woman with immense musical gifts and the music business is a beast to overcome and master.”

1. The Woman They Could Not Silence: One Woman, Her Incredible Fight for Freedom, and the Men Who Tried to Make Her Disappear by Kate Moore
(Source Books)

“Using Packard’s extensive writings, trial testimonies, and governmental reports, Moore’s latest work brings to life the activist’s tireless efforts and the advocacy work she accomplished in the mid-20th century … A must-read for anybody interested in women’s history or the history of reform in the United States. Like Radium Girls, this volume is a page-turner.”

2. The Storm is Upon Us: How Qanon Became a Movement, Cult, and Conspiracy Theory of Everything by Mike Rothschild
(Melville House)

“In clear, punchy prose Rothschild explains how the movement that started on a message board for white supremacists, antisemites and fans of hard-core porn moved into the mainstream … The story of QAnon has so many twists and turns, it’s sometimes hard to keep track. But Rothschild’s book reads like a thriller, with cliffhangers that leave you eager for the next episode … Rothschild writes with compassion about some of those who have been sucked into it … What he doesn’t quite do is explain the psychological leap that enables perfectly ordinary people to believe that liberals and Jews are child-trafficking paedophiles. Perhaps no one really can … The Storm Is Upon Us is an impressive piece of research and a gripping read.”

3. What White People Can Do Next: From Allyship to Coalition by Emma Dabiri
(Harper Perennial)

“Both a blazing polemic against the concept of race as anything more than a means to create racism as well as a fundamental route toward active unification … Dabiri once again pulls no punches, offering a sharp, relevant critique and deconstruction of racial categorizations, particularly the common assumption of White people as the default norm … the author is consistently direct and urgent in her presentation … A must-read for anyone seeking to be an agent of much-needed societal change.”

“Part memoir, part history, and part travelogue, Migratory Birds explores the vicissitudes of language … From Normandy to Neverland, the through line of this excellent collection is movement, and the essays meander around history in an appealing way … The most moving essays in this book deal with the aftermath of crises and the task of using words to describe, with accuracy, the tragic events taking place … Evincing reverence for language, the essays of Migratory Birds take a fascinating tour around the world, showing how historical events affect the way we learn words.”

“Herrera’s clear, piercing language both manifests and foils the allure of the society her mother calls ‘Upper Bohemia.’ Herrera’s craft shines in her ability to write candidly about class and privilege in a memoir dedicated to childhood wonder.The book imparts a desire for belonging and parental affirmation; Herrera writes affectionate and at times scandalous portraits that preserve her younger self, her siblings, her parents, and her parents’ lovers, sometimes with images of their naked bodies. And yet, the romance she best preserves in this memoir is her relationship with Cape Cod, a pastoral setting of lost generational wealth and intense familiarity … Herrera’s memoir engages in discussions of mental health, equality, and fulfillment without passing judgement on her subjects; a rare feat. A riveting story of necessary resilience.”