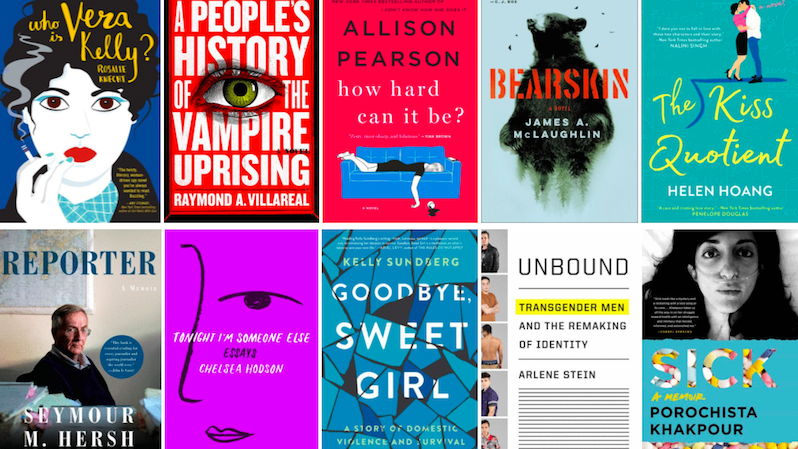 Rosalie Knecht’s Cold War-era literary spy thriller, Who is Vera Kelly?, claims the title of Best Reviewed Fiction Book of the Week, with reviewers praising the emotional depth of Knecht’s heroine. Raymond A. Villareal’s ingenious blend of political thriller and gothic horror, A People’s History of the Vampire Uprising, also had a strong showing, as did Allison Pearson’s “fiercely funny and keenly observant” How Hard Can It Be, a follow up to Pearson’s 2003 bestseller I Don’t Know How She Does It. Iconic investigative journalist Seymour Hersh’s memoir, Reporter, is our Best Reviewed Nonfiction Book of the Week, just ahead of Chelsea Hodson’s transfixing debut essay collection, Tonight I’m Someone Else, and Kelly Sundberg’s “heartbreaking, breathtaking…and urgently truthful” memoir of marriage and domestic violence, Goodbye, Sweet Girl.

1. Who is Vera Kelly? by Rosalie Knecht

“The distance between Vera’s backstory and her mission in Argentina sets Knecht’s novel apart, making it more than just a suspense-driven romp of Cold War covert ops. Vera is no James Bond, with his glamour and gadgets, nor is she the anti-James Bond, John le Carré’s George Smiley, the bland, bespectacled, and balding expert in tradecraft. Vera is a deeply lonely lesbian living in a time of vice squads, and her history is as crucial to the plot as any suspicious man in a trench coat … What kept me turning the pages in Who is Vera Kelly was not so much a desire to find out what Vera’s spying would reveal about Román’s plotting and its relationship to the coup. Instead, I found myself drawn to the bildungsroman folded into the spy novel. Balancing those two elements in alternating chapters that read like Vera’s diary entries, Knecht imbues the novel with emotional depth that allows for meditation on human connection and the ties that bind us to life’s worth.”

Read an excerpt from Who is Vera Kelly? here

2. A People’s History of the Vampire Uprising by Raymond A. Villareal

“Villareal’s cheeky blend of political satire and gothic thriller is enhanced by his background as an attorney and his deft use of convincing details: the science behind the NOBI virus; the Gloamings’ legal defense in their efforts to be recognized under the ADA; minutes from congressional hearings; copious footnotes; and three brief appendixes … Aside from its ironic allusion to Howard Zinn’s classic, A People’s History of the United States, Villareal’s novel is somewhat reminiscent of Christopher Farnsworth’s Nathaniel Cade series, though Farnsworth is a better prose stylist … With its doggedly unglamorous investigators pitted against a cabal of narcissistic, wealth-obsessed bloodsuckers, this wild ride of a novel proves that each era gets the vampires it deserves.”

3. How Hard Can It Be? by Allison Pearson

“Pearson is fiercely funny and keenly observant. But it is her poignant and powerful statements about serious topics like aging, the invisibility of older women and the impact a paycheck has on a woman’s psyche that make this novel a must-read … How Hard couldn’t be more timely or delightful, as Kate faces the hormonal and hiring cliff that is turning 50, a marriage moping into midlife, parenting in the social media era and an office culture that is ripe for a Me Too moment.”

4. Bearskin by James A. McLaughlin

“Much as natural beauty can mask predator/prey violence, McLaughlin’s lush descriptions of the native flora and fauna of Moore’s mountain domain, the ‘fecund riot of chest-high bluestem and orchard grass,’ seductively create what could be a setting out of Elizabeth Gilbert’s The Signature of All Things … An extraordinary first novel of powerful prose, Bearskin captures the blurry line between studying primordial nature and being a part of it.”

Read an essay by James A. McLaughlin here

5. The Kiss Quotient by Helen Hoang

“Hoang mixes sexy and tender with panache, and she’s careful in sketching out the dynamics of the romance, making sure to maintain a balance … Hoang’s debut novel is unputdownable, exceptional, and leaves a strong impression that won’t wane anytime soon. I confess, it’s probably not ideal reading material for your commute because you’ll find yourself so immersed that you’ll inevitably miss your stop—but as tempting as it may be to binge-read, it deserves to be drawn out and savored.”

“The experience of reading Hersh’s memoir is like visiting a lost world … It’s all reporting—dense and detailed reporting on reporting. That iterative and pointillist style of telling a story does fall into a genre: noir…To put it in a callow way, this stuff is cool. It’s also very masculine. Almost every person in Hersh’s memoir is a man—a sign of the time and the industry … Hersh is not a political theorist, nor a literary memoirist, nor a paragon of journalistic behavior. He’s a reporter. Looking back over his career from today’s vantage point, he is something of an incomplete hero. It’s easy to mourn the loss of this industry’s old form, and to lionize Hersh as its most ferocious remnant. The past is a foreign country, and, for better or worse, they did journalism differently there.”

2. Tonight I’m Someone Else by Chelsea Hodson

“The collection’s greatest strength may be Hodson’s self-awareness. Writing of her desire to be ‘fractional,’ or not wholly seen, she joins a body of women writers whose subject is their own self-destruction as a means of escaping domestic ennui…. These lucid insights, and Hodson’s transfixing style, mark a memorable first collection.”

“Goodbye, Sweet Girl is heartbreaking, breathtaking in its scope, and urgently truthful in its harrowing and tender examination of when empathy fails—and when it wins … [Sundberg] reveals the poignancy of contemporary self-actualization, that this experience doesn’t define her, but moreover, it doesn’t shame her. She’s as full as ever. This book is her deliverance.”

4. Unbound: Transgender Men and the Remaking of Identity by Arlene Stein

“It feels as if Stein has written this book imagining it might fall into the hands of those who need such a primer—much as she once did—and she wants to give them the fortification she yearned for. She depicts her subjects with warmth and respect, and strains to include as much as she can about the social, emotional, medical and psychological dimensions of transitioning. The result is frantically overstuffed but earnest, diligent and defiantly optimistic … Stein repeatedly allows herself to be impolitic and wincingly frank, almost using herself as a foil for the limitations of second-wave feminism.”

Read an excerpt from Unbound here

“The amazing thing about Khakpour’s book is the way she recognizes that any illness in modern life inevitably enters the mind. I hope Khakpour’s memoir isn’t relegated to the health section of the bookstore or of Amazon, because it’s not really about Lyme, or not most deeply about Lyme—it’s about modern life. And it’s one of the most chilling, if meandering, portraits of it I’ve read … like reading the diary of someone you always wanted to be like, only to be transfixed by just how bad being that person can be … Khakpour has written an unsettling book. But it’s one of lasting merit. It’s something to keep by our desks rather than our bedside tables: not a consolation but a provocation.”

Read an excerpt from Sick here