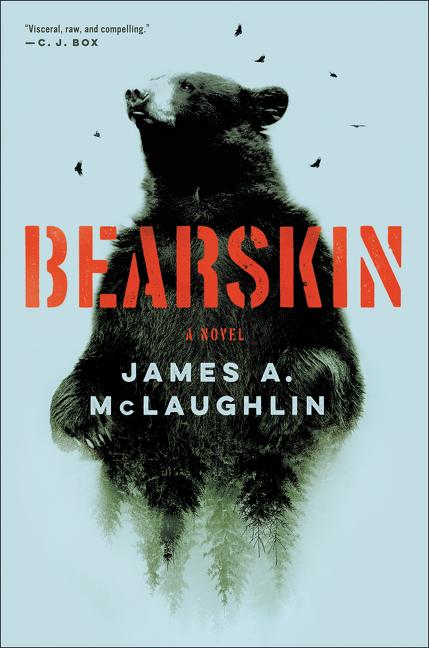 A country noir in which a fugitive from a Mexican cartel takes refuge in a forest preserve in the wilds of Virginia where he finds himself becoming obsessed with catching a group of bear poachers.

What The Reviewers Say
Rave Bruce Jacobs,
Shelf Awareness
Much as natural beauty can mask predator/prey violence, McLaughlin's lush descriptions of the native flora and fauna of Moore's mountain domain, the 'fecund riot of chest-high bluestem and orchard grass,' seductively create what could be a setting out of Elizabeth Gilbert's The Signature of All Things ... An extraordinary first novel of powerful prose, Bearskin captures the blurry line between studying primordial nature and being a part of it.
Read Full Review >>
Positive Dennis Drabelle,
The Washington Post
...[an] exciting first novel ... Like a slow-motion cinematographer, McLaughlin skillfully breaks down the actions of hunter and hunted into their constituent parts ... Bearskin, then, may call for a little patience from the reader. But stick with the novel and you’ll be rewarded with some of the best action writing in recent fiction.
Read Full Review >>
Positive David Canfield,
Entertainment Weekly
Atmosphere, as its opening so impeccably indicates, is everything in Bearskin. This is not exactly the page-turning thriller so overstuffed with twists it leaves you dizzy by page 100. It’s a slow-burn by design, a tale of suspense that reels you in through McLaughlin’s scrupulous skill. There’s no escaping the mountainous isolation enveloping Rice, and as the novel pushes forward and stakes a claim in richer psychological territory, there’s no escaping the man’s tortured mind, either ... Ostensibly a character study, Bearskin is most satisfying as a philosophical investigation of man and nature, washed in noir ... it’d be better off without its most familiar beats, its reverting to genre expectations. But when its imagery, so stark and often poetic, takes center stage, Bearskin is elegiac, hypnotic—unshakable.
Read Full Review >>
See All Reviews >>
SIMILAR BOOKS
Fiction

Before She Disappeared
Lisa Gardner
Rave
What did you think of Bearskin?
© LitHub | Privacy