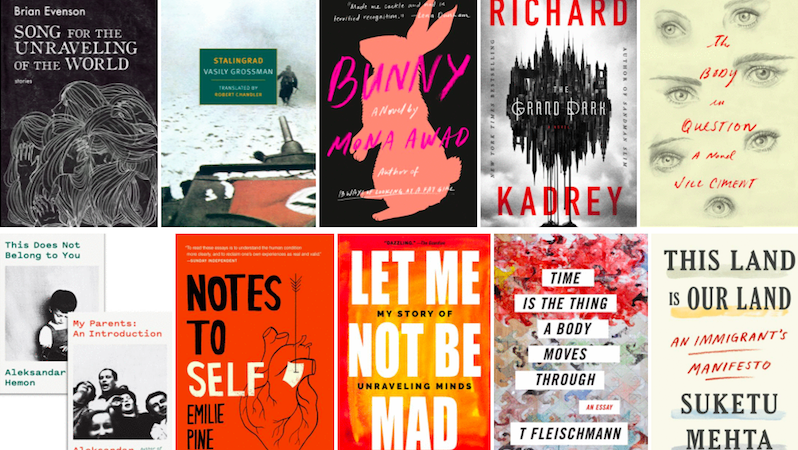 Aleksandar Hemon’s gorgeous dual memoir, a new collection of terrifying stories from Brian Evenson, and a chronicle of a descent into madness are among the most critically acclaimed books of the past seven days.

1. Song for the Unraveling of the World by Brian Evenson

“…a perfect introduction to Evenson’s work for those who are looking to experience it for the first time. For longtime Evenson readers, there are also plenty of delights here, ranging in tone from the philosophical to the visceral … All told, Song for the Unraveling of the World is a succinct exploration of Brian Evenson’s strengths as a writer: some of the concepts and images here aren’t likely to leave my head any time soon, and the evenness of his tone and precision of his language only accentuates these stories’ moods. There’s also a sense of Evenson pushing out and trying new things, keeping things interesting for those who have been reading Evenson for a while now. Evenson knows how to meticulously construct a story, but he also knows the primal terror that can come from a darkened space or something just out of view. In these stories, he demonstrates just how effective those traits can be combined.”

“For this translation, as forceful, sensitive and richly coloured as that of Life and Fate, Robert and Elizabeth Chandler have woven the strongest unpublished material into the 1956 version. The result is another huge, seething fresco of front-line combat, domestic routine under siege, and restless debate. Again, Grossman transforms into art ‘all the savage grief and homeless happiness of those terrible years’ … The battle scenes…have all the mesmeric thrill and dread that admirers will recall from Life and Fate. The lyricism, tenderness and pathos of the moments of respite touch the same heights … few works of literature since Homer can match the piercing, unshakably humane gaze that Grossman turns on the haggard face of war.”

“Awad does so many things right in Bunny … Bunny functions perfectly as both a dark academic satire and a creepy horror novel, and Awad threads them both seamlessly—she can make the reader laugh out loud in one paragraph, and cringe with fear in the next … With the Bunnies, Awad has created some of the most memorable antagonists in recent fiction. The young women are scarily believable contradictions … They’re also perfect foils for Awad’s satire of the preciousness and navel-gazing that sometimes accompany discourse about creative writing … Awad has a true gift for satire—Bunny is as mercilessly funny as similarly themed novels by Jane Smiley (Moo) and James Hynes (The Lecturer’s Tale). But it also shines as a horror tale … It’s a novel that’s difficult to describe but easy to fall in love with … Awad has proved herself one of the most innovative and original authors out there, and Bunny is a wild, audacious and ultimately unforgettable novel.”

Read an excerpt from Bunny here

4. The Grand Dark by Richard Kadrey

“Kadrey can do hard-boiled like nobody’s business, like a Tom Waits ballad in novel form. And you know that he can do plot like hell, a fast-burning, violent and relentless storytelling mode that propels his gentleman loser antiheroes along with great energy, in the face of adversity, beatings and impossible odds. The Grand Dark is a miracle of the old and the new: a tale of Weimar decadence that is also a parable for our New Gilded Age, where war is inequality’s handmaiden, an incinerator that neatly removes the unnecessariat and fattens the purses of their social betters. It’s a fun and terrifying ride, gritty and relentless, burning with true love and revolutionary fervor.”

5. The Body in Question by Jill Ciment

“…deft orchestration of absurdity and existential dread distinguishes Ciment’s style. That’s why the situation of Ciment’s latest novel, The Body in Question is so perfectly suited to her powers as a novelist…The droll and the horrifying mingle in the flat air of the courtroom and the limbo of the juror’s lounge … All of this could be the stuff of melodrama, but Ciment’s incisive language turns The Body in Question into a profound story about mortality and the mysteries of human behavior. By trial’s end, we’re told that Hannah and the other jurors have ‘run out of small talk and can no longer abide one another’s company without alcohol.’ But, as a reader, I happily could’ve been sequestered for a while longer within the confines of Ciment’s smart and disturbing novel.”

Read an excerpt from The Body in Question here

1. My Parents: An Introduction / This Does Not Belong to You by Aleksandar Hemon

“[A] gorgeous new dual memoir … The writing contains both immediacy and a thrillingly historical long view … The stories Hemon tells about his parents and their histories are by turns harrowing and hilarious … There is all the love and frustration here that anyone feels for their aging parents, with the additional heft of sympathy for their pain … While My Parents unrolls in great skeins of storytelling, its companion book, This Does Not Belong to You, is a series of short, spikier pieces, untitled, none longer than a single paragraph … This is some of the best writing about what it really feels like to be a child that I can recall reading.”

Read an excerpt from My Parents: An Introduction / This Does Not Belong to You here

2. Notes to Self by Emilie Pine

“…unsparing … there is no self-pity or justification in its calm excavation of the lasting damage caused to a family by addiction … The second essay, “From the Baby Years,” charts the gruelling process of trying and failing to conceive and the pain of miscarriage. The mood is different and it is perhaps more introspective yet equally raw and harrowing … I’ve never read anything quite like these essays. Pine’s fluent intelligence flows through each question, each dilemma, in its own inimitable way. It’s the kind of book you want to give to everyone.”

3. Let Me Not Be Mad: My Story of Unraveling Minds by A. K. Benjamin

“…magnificently unsettling … His interest isn’t merely in describing this empathy but evoking it, slightly coercively, from the reader (there’s an annoying yet undeniably powerful twist in this tale that I’m trying to sidestep) … Benjamin’s narrative creeps along the borders of his case studies. His patients’ suffering recalls his own … He reels off superbly sympathetic statements—’patients are often our imagined others’—with the kind of professional tenderness worthy of Oliver Sacks. He is no Sacks. Something stranger is afoot … The language suddenly changes, turns jagged and gnomic … This book about madness becomes itself the chronicle of a shattering breakdown … Certain sections are inevitably difficult to follow … Be advised: You’ll need a mighty tolerance for that Laingian mythopoeic perspective of mental illness to make it through this maze. But succeed and its conclusion feels like a benediction.”

4. Time Is the Thing a Body Moves Through by T. Fleischmann

“Fleischmann is not wringing their hands but instead leaning into the world, constantly pressing at the corners of language … I am astonished by how Fleischmann folds written language, as constrictive and limiting as it can be, into an open form … Watchful of its context and position, this book is able to pose increasingly interesting, urgent, and difficult questions. It holds us accountable to the world. What are we doing about our global climate crisis? How can we pay reparations? How and when are we complicit in state violence? How do we move forward?”

5. This Land is Our Land: An Immigrant’s Manifesto by Suketu Mehta

“In an age of brutal anti-immigrant rhetoric and policy, This Land is Our Land offers a meticulously researched and deeply felt corrective to the public narrative of who today’s migrants are, why they are coming, and what economic and historical forces have propelled them from their homes into faraway lands … reads like an impassioned survey course on migration, laying bare the origins of mass migration in searing clarity … The book makes a convincing argument that contemporary migration is a direct descendant of colonialism …is, in large part, a case for reparations … Must we read such obvious truths? Perhaps we must.”

Read an excerpt from This Land is Our Land here