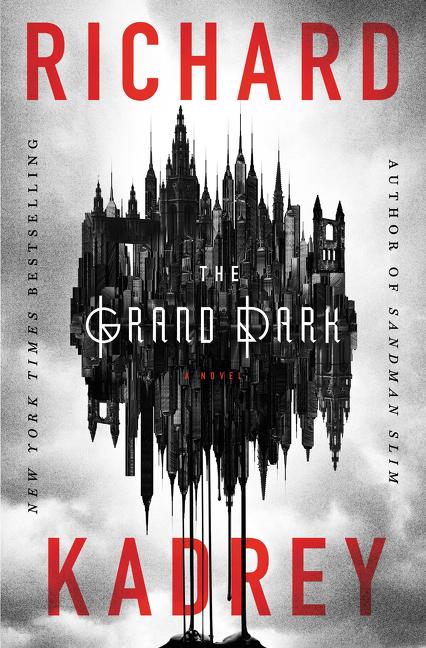 The bestselling author of the Sandman Slim series returns with a standalone fantasy about the debauched city of Lower Proszawa, where a decadent peace has settled in after The Great War. Protagonist Largo has ambitions to climb the social ladder while others in the city have their own powerful ambitions—and another war looms on the horizon.

What The Reviewers Say
Rave Cory Doctorow,
Los Angeles Times
Kadrey can do hard-boiled like nobody’s business, like a Tom Waits ballad in novel form. And you know that he can do plot like hell, a fast-burning, violent and relentless storytelling mode that propels his gentleman loser antiheroes along with great energy, in the face of adversity, beatings and impossible odds. The Grand Dark is a miracle of the old and the new: a tale of Weimar decadence that is also a parable for our New Gilded Age, where war is inequality’s handmaiden, an incinerator that neatly removes the unnecessariat and fattens the purses of their social betters. It’s a fun and terrifying ride, gritty and relentless, burning with true love and revolutionary fervor.
Read Full Review >>
Rave Jason Heller,
NPR
Rather than lean, mean, and hardboiled, Kadrey's new standalone novel is a sprawl of ornately arranged speculative fiction that ups the ante for urban-set fantasy. And yes, as its title loudly advertises, the book retains every inky ounce of Kadrey's trademark darkness ... The Grand Dark's plot is sturdy, but it mostly serves as a solid framework on which Kadrey drapes his sumptuous setting ... Kadrey's triumph is keeping The Grand Dark's bleakness in check, channeling it into wondrous forms instead of letting it overwhelm the story. Lower Proszawa may be a gray place, but it's brightened by Largo's and Remy's mutual devotion, a lower-class romance right out of The Threepenny Opera ... The Grand Dark is more than just another reliably strong outing from a veteran writer. It's the work of a major science fiction/fantasy creator going way out in a limb in the effort to wholly redefine himself, all while crystallizing what's made him great.
Read Full Review >>
Rave Laura Hubbard,
BookPage
Richard Kadrey’s The Grand Dark takes its time. Indeed, for the first third of the book it is unclear exactly what plot Largo Moorden is blindly walking into. Kadrey reveals Lower Proszawa almost as though by candlelight, showing readers just enough at any one time for them to see a few vibrant figures of a city under immense strain. Beyond that, the dark outlines of the threatening world are present but obscured and muted. Despite its lack of cliffhangers and action scenes, the subtle but constant pressure from that insidious outside world makes The Grand Dark an unexpected page-turner. With secret police and anarchist groups seemingly everywhere, it feels like a conspiracy in book form. Around every corner is a potential mystery, although it is sometimes unclear which mysteries are important and which aren’t. But when the central conflict of the book is finally revealed, it is both wholly unexpected in the moment and perfectly obvious in retrospect ... Kadrey successfully weaves the ultra-realistic with the nearly possible into a beautiful and morbid tapestry that fascinates as much as it entertains. The result is a fantastically written book for suspense or fantasy fans looking for a bit of gloom to fight the summer heat.
Read Full Review >>
See All Reviews >>
SIMILAR BOOKS
Fantasy

Ordinary Monsters
J M Miro
Positive
What did you think of The Grand Dark?
© LitHub | Privacy