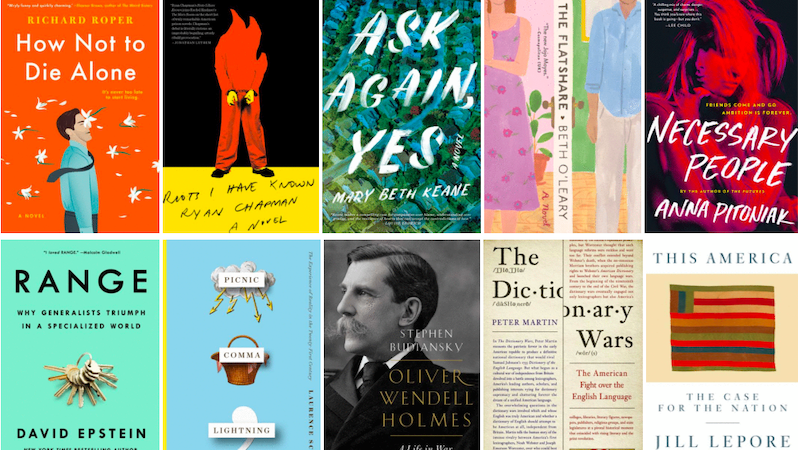 Ryan Chapman’s riotously funny prison novel, David Epstein’s case for generalists, and Jill Lepore’s state of the nation are among the books most lauded by the critics this week.

1. How Not To Die Alone by Richard Roper

“[A] winning debut novel … Like many funny novels, How Not to Die Alone is influenced by the adage that humor equals tragedy plus time. We root for Andrew to come clean and connect, as much for his benefit as our entertainment … when Roper makes it work, the payoff is tremendous … Roper’s unbridled compassion for his characters is the book’s greatest strength. He doesn’t judge or patronize, even when they act foolishly. It’s this generosity of spirit that allowed me to forgive, if not ignore, the novel’s shortcomings … I loved this novel with my whole heart.”

2. Riots I Have Known by Ryan Chapman

“This is not a typical setup for a work of comedy. But somehow, Chapman’s book is one of the funniest American novels to come around in years, a sharp satire of the literary scene as well as the broken prison system. Despite the grim subject matter, Chapman packs more laughs into 128 pages than most sitcoms do in an entire season … the narrator’s sheer punchability actually works in favor of the novel. Freed from the obligation to sympathize with him, the reader is able to appreciate the absurdity of the book, and the obvious fun Chapman is having with the story … Chapman uses pitch-black humor to highlight how broken the system of criminal justice is … Modern satirical novels sometimes make the rather obvious and fatal error of never approaching anything close to humor, but Chapman avoids that trap. Dark, daring, and laugh-out-loud hilarious, Riots I Have Known is one of the smartest—and best—novels of the year.”

Read an essay by Ryan Chapman’s essay, “The Biggest Influence on My Novel Is… McDonald’s?,” here

“…well-wrought, emotionally affecting … [a] beautifully observed story … a narrative that holds many surprises, large and small … Ask Again, Yes is a tale that will compel readers to think deeply about the ravages of unacknowledged mental illness, questions of family love and loyalty and the arduous journey toward healing and forgiveness.”

4. The Flatshare by Beth O’Leary

“Tiffy and Leon could easily become clichéd characters, but debut author O’Leary perfectly captures their unique voices. The story is a delight from start to finish, full of eccentric side characters and sexual tension. Although the romantic comedy elements are always at the forefront, there are plenty of moving moments … With likable main characters, spot-on dialogue, a fun premise, and plenty of drama, there’s a lot to like in this sweet story … A warm, enchanting love story perfect for fans of classic rom-coms.”

“If the pivotal event of the book—and its sinister aftermath—seems slightly far-fetched given the relative grounding of the first two-thirds of the novel, who cares? It’s a trivial quibble given the sheer pleasure of reading this book. Pitoniak is an astute social observer, and the novel—a literary thriller about class aspiration and young female ambition—is a twisting delight with a haunting punch … Deceptively nuanced, and impossible to put down, this is escapism with substance.”

1. Range: Why Generalists Triumph in a Specialized World by David Epstein

“In his latest book…Mr. Epstein makes a well-supported and smoothly written case on behalf of breadth and late starts … The chapter titled ‘Deliberate Amateurs’ is a delight, permitting us to spend time with some exemplars in science and medicine who have stepped outside of their cozy professional nests … as David Epstein shows us, cultivating range prepares us for the wickedly unanticipated.”

2. Picnic Comma Lightning: The Experience of Reality in the Twenty-First Century by Laurence Scott

“It is a philosophical meditation on perceptions of reality, achieved by means of beguilingly playful moves from confession to anthropology to social analysis. It is also an elegy for two lost parents … In the tradition of Barthes’s mythographies of everyday life, Scott makes banal things shimmer with meaning … He operates on a dauntingly large conceptual scale, but there’s a sense of embrace in his cleverness. It’s not often that a highly ambitious work of social analysis speaks so determinedly to the heart.”

3. Oliver Wendell Holmes: A Life in Law, War, and Ideas by Stephen Budiansky

“Many scholars have recognized the [U.S. Civil] war’s critical influence on Holmes. Yet Budiansky, whose previous books include six on military history, renders Holmes’s war, and how it lodged in his psyche, as no writer has before … More broadly, Budiansky’s is now the most engrossing of the major Holmes biographies. It vibrantly recounts the influence on his extraordinary public experiences of his extraordinary private ones … Providing the fullest measure of Holmes’s life yet, Budiansky makes a sympathetic-to-Holmes and convincing case that the justice should not be dismissed based on the worst opinion he wrote.”

4. The Dictionary Wars: The American Fight Over the English Language by Peter Martin

“The book’s potentially dry material is vivified by engaging, sometimes dramatic prose, and the complex tangle of rivalries and relationships is fascinating. Discussions on lexicography are technical without being abstruse, and they balance well with the biographical details. Historically informative, the book is also an opportunity for American self-reflection. Substitute ‘internet’ or ‘social media’ for ‘newspapers’ or ‘pamphlets,’ and several passages of The Dictionary Wars could have been pulled from some modern-day editorial or blog lamenting the destruction of public discourse. There is, after all, nothing new under the sun. With an impressive breadth of research, The Dictionary Wars invites contemplation of the ways in which language itself can affect the soul of a nation.”

5. This America: The Case for the Nation by Jill Lepore

“…an urgent and pithy book-length essay in which she argues for the viability of the nation. Readers seeking clear and relevant definitions of political concepts will appreciate this brisk yet thorough, frank, and bracing look at the ancient origins of the nation state versus the late-eighteenth-century coinage of the term ‘nationalism’ and its alignment with exclusion and prejudice … Lepore writes, placing today’s conflicts in context and calling for us to continue the struggle to deepen and protect American democracy.”