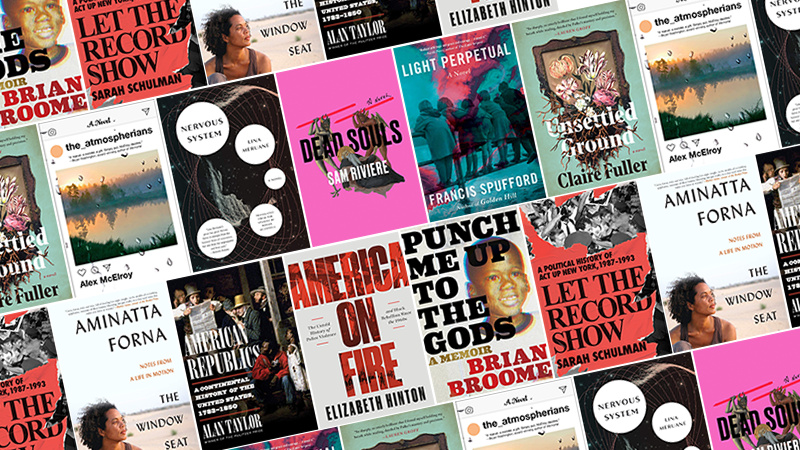 “… gorgeous … trains our attention on everyday life and seemingly unremarkable people, those who, as George Eliot wrote, ‘lived faithfully a hidden life, and rest in unvisited tombs’ … Spufford is less interested in how people with different dispositions and capabilities ‘end up’ than in specific moments, be they routine, wondrous, or horrifying, that make up the texture of a life, events that make it worth living or a living hell … Spufford is uncannily good at capturing the allure such boys exert over a certain kind of girl. This, too, is a high point, an interlude picked out as if by a spotlight, in which Val feels especially alive … the sort of novel that’s carried by its descriptions, passages that transform the ordinary into the transcendent and leave us marveling … The peril with this approach, of course, is that we might miss the goals—an author’s vision might dissolve into merely a page full of words. Spufford almost always strikes the right balance, although his restraint does fail him in the book’s overlong opening scene … Ben may close the novel with a paean to the creator that he and his inventor (Spufford has written about his Christian faith) believe in. But this genial novel makes space for readers who believe that nothing is eternal.”

“With a textured, naturalistic writing style […] Ms. Fuller weaves between ordinary village life and the Seeders’ shadowy family saga, which is marked by illicit love, violence and blood debts. The close attachment to Jeanie’s and Julius’s limited points of view enrich the suspense as long-kept secrets are gradually revealed. But even the disclosures and resolutions can’t entirely domesticate Unsettled Ground, which carries its lonely, stirring music of loss to the end.”

“… bold, mischievous, and brilliant … While the foundations of the story might sound zany, The Athmospherians is a heady exploration of masculinity in crisis, the toxic nature of internet discourse, and the damaging pursuit of relevance over all else. There are moments when the plot borders on the delirious, but McElroy never loses the narrative thread or its foundations in the very real concerns of today. This is a book that almost demands to be read compulsively, so hard is it to fully relax in the new scenarios that come with each page. It is also side-splittingly funny and seductive in the way that a smooth-talking swindler or too-good-to-be-true social media starlet so often is … One of the ways McElroy accomplishes this is through their precise use of language. The novel is infinitely quotable, providing an embarrassment of descriptive riches … it will be hard to deny that this is a novel you’ll mull over long after you’ve read the last sentence. You might even memorize its most biting quips.”

“While at times the quick transitions from one scene to another can make the novel feel slightly overcrowded, Meruane is a deliberate and immensely gifted writer who understands how political trauma is forever stored in the human body. Betraying a keen eye for microscopic precision and a pliant poetic imagination, her sentences move between the two poles of scientific detail and metaphysical sensibility … A restless novel, Nervous System burns in the mind long after one has read it, not unlike the ghosts who circumnavigate our psyches, and the winding corridors of history, to hammer us on the head with the raw truth that time is not linear. The distance between the deep past and the present, Meruane shows, is much shorter than we might be inclined to think.”

“Dead Souls is Sam Riviere’s Thomas Bernhard phase. It is a single-paragraph novel, written in raging, recursive prose, about the small world of English poetry … Within a couple of pages this subject matter became clear and I thought, ‘Oh God, why bother?’ But a hundred pages later, I was thinking, ‘Why bother with anything else? Why bother with lunch?’ This is a brilliant and brilliantly entertaining novel. The writing is merciless; the rage is genuine. I’d say it was satire, and it is that, but it’s also a meticulous analysis coming from a place of despairing intimacy … The cumulative effect is exhilarating: Riviere has turned paranoid pub talk and midnight doubts into a prose poem of laceration. But the novel goes deeper than flesh wounds. Time after time, the reader is brought to a point of soul horror – the horror of doubleness, nothingness, meaninglessness … By the novel’s end, Riviere has extended his satiric range far beyond the monstrous poetry scene. It’s become a guilt verdict on his countryfolk worthy of Thomas Bernhard. Not just a phase.”

1. Punch Me Up to the Gods: A Memoir by Brian Broome
(Houghton Mifflin)

Read an excerpt from Punch Me Up to the Gods here

“Brian Broome loses no time establishing his bona fides as the most fearless of memoirists who is capable of such magic … Broome gets to work putting himself on the witness stand of his own life, where the obligation to tell the truth produces harrowing testimony that makes our ears bleed at times … Punch Me Up to the Gods delivers disturbing scenes of both racism in a rural Ohio and the homophobic bullying he faced at home from his unemployed father and others … In tales laced with droll humor and stoicism that would be impossible for most people to generate under the circumstances, we follow Broome’s increasingly desperate attempts to fit into whatever scene would be willing to have him … Whether describing the accidental burning down of his childhood home or a savage beating by his father when he is caught playing with dolls in his sister’s room, Punch Me Up to the Gods is full of narrative complexity and richness.” 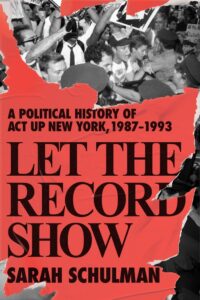 “… a masterpiece tome: part sociology, part oral history, part memoir, part call to arms … The public face of ACT UP was often white and male … But the organization itself was (if unevenly) devoted to medical access for all demographics…and this focus owed much to the work of activists from those demographics whose stories Schulman excels in highlighting … Schulman has critical words for narratives…that center on a straight savior narrative, that tell only the story of white gay men, or that imply activism was the work of a few rather than of the collective. A stickler could argue that to zero in on ACT UP New York is to reinforce another kind of generalization: that New York, along with maybe San Francisco, was where AIDS happened, and where the response happened—to the exclusion of activism in other cities, on college campuses and abroad. To be clear, this is not a flaw in Schulman’s book itself, which could only achieve such depth by narrowing its focus to one specific organization. She also makes known the impact of those who brought ACT UP outside the city … Here is a primer, a compendium of what one group learned and struggled with and accomplished. Here is a book to start a mighty shelf.”

3. The Window Seat: Notes from a Life in Motion by Aminatta Forna
(Grove)

“With this collection, she proves a compelling essayist too, her voice direct, lucid, and fearless. All the pieces are enjoyable and often surprising, even when rather slight. But the most substantial ones are memorable—even unforgettable. They deftly straddle the personal and the political … Her particular perspective sheds light on the complexity of race in the United States; the essay follows her education in a history that is not straightforwardly her own, and yet is inescapable.”

“… stimulating … Many histories of this important interregnum period have been written, but none emphasizes the fragility of the American experiment as strongly as Taylor’s book does … Taylor, acutely sensitive to such strains on the national fabric, traces the continuing conflict between competing visions of democracy … Taylor’s special contribution in American Republics is his capacity for panning out to capture major historical trends. Not only does he cover about five decades in a relatively concise 384 pages of text, but he discusses events and people in various sections of the nation and in Canada and Mexico as well. The result of this broad-spectrum approach is, as Taylor’s subtitle indicates, a truly continental history … he shows his skill in producing an expansive overview that synthesizes discoveries by historians, including himself … Whether as a gloss of received historical wisdom or as an overview whose originality lies in its comprehensiveness, American Republics succeeds admirably.”

5. America on Fire: The Untold History of Police Violence and Black Rebellion Since the 1960s by Elizabeth Hinton
(Liveright)

“… a groundbreaking, deeply researched and profoundly heart-rending account of the origins of our national crisis of police violence against Black America … Through 10 crisply written and lucidly analytical chapters, Hinton reframes the conventional understanding of the long hot summers of the 1960s and their aftermath … In a very real sense, America on Fire chronicles how law enforcement became the nation’s main policy tool both for stemming urban unrest and for stifling Black demands for citizenship and dignity … One of this book’s many virtues is the way it contextualizes the emergence not just of the Black Lives Matter protests but of our larger contemporary moment … Hinton’s unstinting examination of this history ultimately leaves one with hope for the future … more than a brilliant guided tour through our nation’s morally ruinous past. It reveals the deep roots of the current movement to reject a system of law enforcement that defines as the problem the very people who continue to seek to liberate themselves from racial oppression. In undertaking this work, Hinton achieves something rare. She deploys scholarly erudition in the service of policy transformation, propelled by Black voices whose hitherto untold stories of protest add much-needed sustenance to America’s collective imagination.”