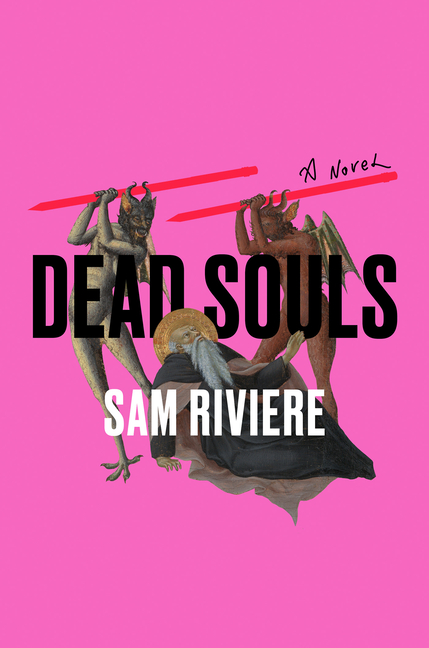 A scandal has shaken the literary world: A poet named Solomon Wiese is accused of plagiarism. The narrator encounters Wiese at a bar in London after a literary festival and listens to the story of his rise and fall, a tale that takes the entire night—and the remainder of the novel—to tell in a wild account that may implicate the narrator.

What The Reviewers Say
Rave Dustin Illingworth,
The New York Times Book Review
Sam Riviere’s debut novel, Dead Souls, depicts a fantastical, alternate-world version of London in which poetry has become the city’s major cultural product ... Like his protagonist, Riviere is not above a stylistic lift when the need arises. His long sentences, use of repetition and italicized emphases are swiped from the great Austrian novelist Thomas Bernhard ... The reading is both manic and thrillingly musical ... Riviere, himself an accomplished poet, writes like one accustomed to the threat of obsolescence. Dead Souls buzzes with networks and media platforms that are as likely to manipulate as they are to empower. In this ambitious fantasy of marginalization, you either die unread or live long enough to see your work in someone else’s portfolio.
Read Full Review >>
Positive Ron Charles,
The Washington Post
Dead Souls, by the English writer Sam Riviere, is hard to stop reading because it’s written as a single paragraph almost 300 pages long. Never in my life have I so missed the little periodic indentations of ordinary prose. It felt like wandering around the mall for six days looking for a place to sit down. But the structure is not the most daunting aspect of Riviere’s novel. There’s also the matter of its subject: Dead Souls is an exceedingly cerebral comedy about the viability of contemporary poetry ... This is not a negative review. Indeed, I think Dead Souls is one of the wittiest, sharpest, cruelest critiques of literary culture I’ve ever read. Riviere unleashes a flock of winged devils to tear apart the hermetically sealed world of privilege, praise and publication in which a few lucky writers dwell.
Read Full Review >>
Rave Toby Litt,
The Guardian (UK)
Dead Souls is Sam Riviere’s Thomas Bernhard phase. It is a single-paragraph novel, written in raging, recursive prose, about the small world of English poetry ... Within a couple of pages this subject matter became clear and I thought, 'Oh God, why bother?' But a hundred pages later, I was thinking, 'Why bother with anything else? Why bother with lunch?' This is a brilliant and brilliantly entertaining novel. The writing is merciless; the rage is genuine. I’d say it was satire, and it is that, but it’s also a meticulous analysis coming from a place of despairing intimacy ... The cumulative effect is exhilarating: Riviere has turned paranoid pub talk and midnight doubts into a prose poem of laceration. But the novel goes deeper than flesh wounds. Time after time, the reader is brought to a point of soul horror – the horror of doubleness, nothingness, meaninglessness ... By the novel’s end, Riviere has extended his satiric range far beyond the monstrous poetry scene. It’s become a guilt verdict on his countryfolk worthy of Thomas Bernhard. Not just a phase.
Read Full Review >>
See All Reviews >>
SIMILAR BOOKS
Fiction

Vladimir
Julia May Jonas
Rave
What did you think of Dead Souls?
© LitHub | Privacy