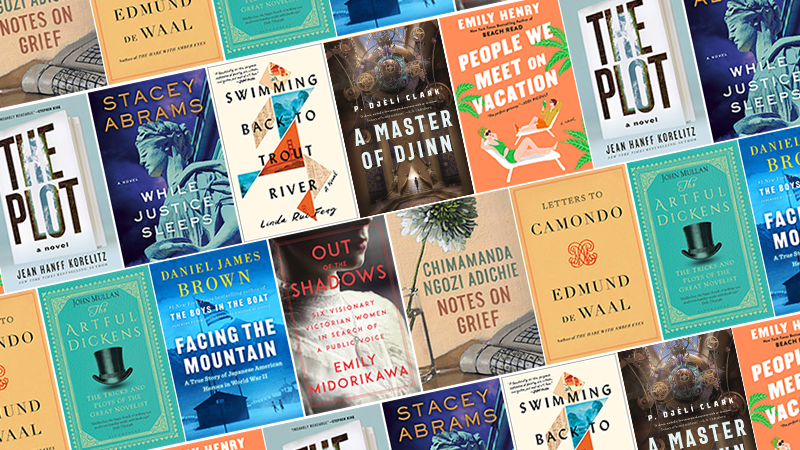 Chimamanda Ngozi Adichie’s On Grief, Stacey Abrams’ While Justice Sleeps, Edmund de Waal’s Letters to Camondo, and Emily Henry’s People We Meet on Vacation all feature among the Best Reviewed Books of the Week.

1. People We Meet on Vacation by Emily Henry
(Berkley)

“… an excellent reminder that a familiar trajectory doesn’t erase the fun of the journey … absorbing and entertaining. Henry isn’t aiming for originality: This is an updated version of When Harry Met Sally, which all these years later still sets the standard for friends who become lovers. She freshens it up with her signature wit, epic near misses and steamy longing that threatens to seep through the page, fogging the reader’s glasses … Be still, rom-com loving hearts … The flashback vacations are terrific, vicarious fun, especially as Poppy and Alex evolve from best friends to people who are clearly pining for each other … Henry masterfully depicts early-30s uncertainty and angst, adding an interesting personal-growth dimension to the story … If the friends-to-lovers trope is ever in danger of feeling tired, Henry saves it with sassy wordplay. Plus, the connection between Poppy and Alex feels genuine, like the romance next door. It’s easy to imagine yourself in Poppy’s heels or Alex’s khakis, realizing you’ve fallen for your closest friend but wary of the potential costs of making a move … lacks the pizazz—the special spark—that helped Beach Read shine. It’s not as deep as its predecessor, and more of a ‘beach read’ in that it doesn’t demand too much of the reader. But it’s still unabashedly fun.”

“If you’re a person who harbors notions about the glamour of the writing life, The Plot will jettison them to the deepest, darkest trench of the ocean floor. If you’re a novelist who has endured the humiliation of a reading with no audience, Jean Hanff Korelitz’s latest novel will help you laugh about the empty room. And if you’re a reader who likes stories where a terrible decision snowballs out of control, this book is just what the librarian ordered. Welcome to a spectacular avalanche … as a longtime fan of Korelitz’s novels, I will say that I think The Plot is her gutsiest, most consequential book yet. It keeps you guessing and wondering, and also keeps you thinking: about ambition, fame and the nature of intellectual property (the analog kind) … Jake Bonner’s insecurity, vulnerability and fear are familiar to those of us who have faced a blank screen, wondering how or whether we’ll be able to scramble letters into a story. Korelitz takes these creative hindrances and turns them into entertainment. Not only does she make it look easy, she keeps us guessing until the very end.”

“Abrams doesn’t break any new ground in While Justice Sleeps,but she keeps the story entertaining and the characters fairly believable, although occasionally the writing and plot are a bit dense … Abrams keeps the plot churning, concentrating on the myriad power plays that go on behind the scenes as she brings in greed, a controversial merger between a biotech and a genetics firm, and self-centered politicians. Those expecting Abrams to skewer only Republicans will be disappointed as she shows fault on both sides of the aisle. Abrams keeps the action in check with the story, making each death matter, even those expected, while using chess moves, intricate puzzles and even the musings of a French philosopher as plot devices.”

“Feng’s lithe debut moves with grace from Communist China to San Francisco and the Great Plains, and from the 1960s to the 1980s, as it follows four interlocked lives … With the lightest of touches, Feng vividly portrays the experience of living in China during Mao’s rule as well as the pressures of being a new immigrant. Looking deeply into the ‘invisible mesh’ that links her characters’ lives, Feng weaves a plot both surprising and inevitable, with not a word to spare.”

“… stunning … With this fantastic feat of postcolonial imagination, Clark reconfigures history with a keen, critical eye toward gender, class, and imperialism. Meanwhile, the colorful prose and thorough worldbuilding allow readers to truly enter this imagined world. An epic tale of magic and mystery, this is sure to wow.”

“.. achingly of its time … I really appreciated Adichie’s discomfort with the language of grief … Books often come to you just when you need them, and it is unimaginable to think just how many people have, like the author, lost someone in this singularly strange period of our history. Adichie’s father didn’t die from COVID-19, but that doesn’t make the aftermath of that loss any less relevant … A book on grief is not the kind of book you want to have to give to anyone. But here we are.”

“Everyone who bought, read and loved Edmund de Waal’s first book. The Hare With Amber Eyes, will find equal interest and delight in Letters to Camondo. It is a beautiful and fascinating book, even if its last pages are painful and depressing. It is also beautifully produced, on good paper with fine illustrations, and how Chatto & Windus can do this at less than the price of many shoddily-published novels beats me … This is a marvelous book, elegant, tender, loving, appreciative, disturbing, a reminder of both the fragility and resilience of high culture, indeed civilization.”

“… excellent … The Artful Dickens is both an exposure of the trickster’s methods and a celebration of close reading. The book is divided into 13 essays which can be read separately, but whose impact is greater when taken together … If Mullan put into his hat a creator of gargoyles and spinner of melodrama, he pulled out an innovator who broke all the rules. The Artful Dickens made me feel that I had been in some form of trance during my earlier reading of these novels.”

“Brown tackles this important story with the same impressive narrative talent and research that made his 2013 book, The Boys in the Boat, an enduring bestseller … The centerpieces of Facing the Mountain are the wrenching, on-the-ground descriptions of battles fought by the 442nd in Europe … Many readers will feel ashamed of the bigotry these men and their families faced—but every reader will admire the resilience that allowed these soldiers to create communities within the internment camps and to play such a pivotal role in the defeat of the Nazis. Most are gone now, but their stories will live on in this empathetic tribute to their courage.”

5. Out of the Shadows: Six Visionary Victorian Women in Search of a Public Voice by Emily Midorikawa
(Counterpoint)

“Midorikawa breathes life into these long-ago women in ways that make them feel contemporary despite their extraordinary circumstances and distance in time. Her description of Harding enduring an incident of stalking resonates with chilling familiarity. You’ll feel these women’s frustration and conviction, and you’ll cheer at their progressive empowerment … It’s remarkable that none of these women seems disingenuous. Throughout Out of the Shadows, they occupy a liminal space between genuine belief in supernatural forces and the ingenious ways they used those forces to their own ends. By the book’s end, it no longer matters whether you believe these six remarkable spirit mediums were hoaxes or not; you’ll certainly believe in them.”