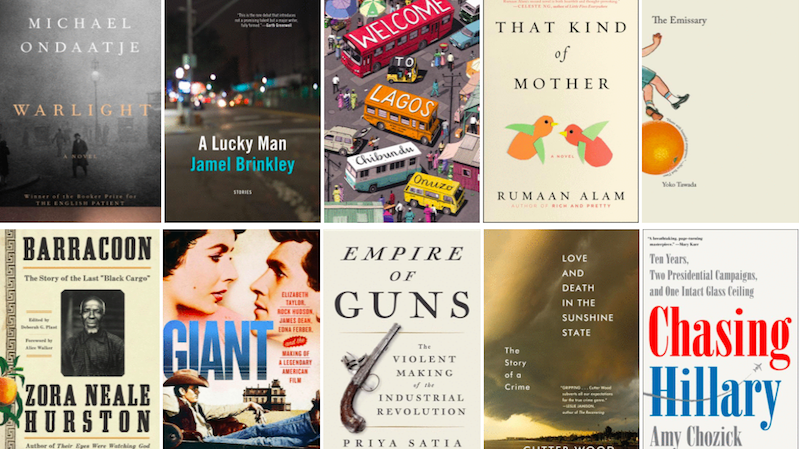 “Warlight has the immediate allure of a dark fairy tale … Warlight is a mosaic of such fragments, so cunningly assembled that the finished pattern seems as inevitable as it is harmonious. What must happen does happen in this elegiac thriller; we just can’t see it coming … As the pattern emerges, Ondaatje imperceptibly tightens the narrative. Gradually, we see that no detail or character, however incidental, has been extraneous … Like its more immediate predecessors—The Cat’s Table, in particular—Ondaatje’s new novel is leaner than The English Patient and its focus tighter, a searchlight’s focus … In Warlight, all is illuminated, at first dimly then starkly, but always brilliantly.”

2. A Lucky Man by Jamel Brinkley

3. That Kind of Mother by Rumaan Alam

“Alam is a writer of true empathy … Mother isn’t big on plot or surprise. It thrills in its attention to nuance, its construction of a full, flawed, loving heroine. Alam’s generous rendering rings authentic. Whatever takeaway one has of Rebecca, a protagonist sure to polarize due to the verisimilitude with which Alam draws her, she emerges with an open, beating heart. It’s partly because Alam knows when to gracefully drive in the knife. He’s wry, but never cruel—confident enough to pinpoint life’s ugliness while keeping hope alive.”

4. Welcome to Lagos by Chibundu Onuzo

“How do you take the teeming microcosm that is Lagos, set it against a backdrop of Nigeria’s slow suicide by oil, and still manage to write one helluva novel? You weave a crisp story that uses well-fleshed characters and a razor-tight plot and stick closely to the ‘show not tell’ philosophy … What follows is a tangy Ocean’s Eleven–esque escapade that exposes class and ethnic divides in the country even as it manages to mock the West for its colonial gaze toward the African continent as a whole. Full of nuance, the story spares no one as it careens toward its satisfying finale.”

5. The Emissary by Yoko Tawada, Trans. by Margaret Mitsutani

“The book’s vision of closed states, xenophobia, mass extinction, and the gulf between the undying adults and their feeble progeny makes it one of the few literary futures that makes you sit up and say ‘Oh yeah, that’s totally going to happen’ … From this description, you’d probably imagine Tawada’s book to be a gloomy dystopic nightmare. Instead, it is charming, light, and unapologetically strange, with a distinct ‘indie cinema’ feel … Tawada finds a way to make a story of old men trapped in unending life and children fated to die before their time joyful, comic, and—frankly—a huge comfort.”

Read an excerpt from The Emissary here

“Barracoon, in many ways, pursues the slavery narrative in the same manner as the book and film 12 Years a Slave: it tracks slavery’s violence and aftermath through the words, memories, and history of a single person who survived it … Holding the book and reading it now, Barracoon seems ahead of its time, largely due to how it makes the story of slavery both intimate and viscerally visual, as Roots did most notably several decades after this manuscript was created …Hurston writes Cudjo’s voice as it was spoken out loud to her. Her strength in articulating dialogue is something that shines in her later work, but it is seen brilliantly here…Hurston lets his language exist, trusting readers to find their way through it.”

“Graham’s book is a compelling behind-the-camera look at one of the 1950s’ most unusual—and successful—mainstream Hollywood productions, a film that celebrates Texas’ most enduring virtues even as it criticizes some of its most tragic shortcomings … Graham doesn’t skimp on the small-town West Texas weirdness, movie-biz trickery (fake tumbleweeds, fake cattle) or on-set shenanigans … Some of the details Graham digs up about the leading actors’ personal lives are juicy enough for Confidential magazine, the Hollywood scandal sheet that had Hudson’s agent cutting deals to keep his client out of its pages.”

3. Empire of Guns by Priya Satia

“….she marshals an overwhelming amount of evidence to show, comprehensively, that guns had a place at the center of every conventional tale historians have so far told about the origins of modern, industrialized world—cultural, scientific, organizational, economical, and political … This book leaves us with the disquieting notion that guns—whether the slow and inaccurate weapons of the eighteenth century or today’s models—do more than alternately cloak or expose human inclination towards violence. They also shape it—not just at the individual level, as we are accustomed to debating, but at the societal, even civilizational or global, level as well. ‘As we make objects, they make us.'”

4. Love and Death in the Sunshine State by Cutter Wood

“Wood’s mixture of fact and art yields a tale both gritty and introspective, with a real murder providing an entree to an examination of the nature of love … But he also does much more, reaching back into his own memories to uncover precise, artfully rendered recollections of his own life and loves, juxtaposing them with the impending tragedy on Anna Maria Island. Wood’s prose is detailed yet deft; he stops just short of laying on the writerly stuff too thick … This is a fine true-crime mystery and a touching journey into the human heart.”

“With her lively voice and eye for detail, Chasing Hillary is an enjoyable read, like The Devil Wears Prada meets The Boys on the Bus … Chasing Hillary is a portrait of two women with shared hopes and weaknesses, both driven and blinded by an ambition that could be possible only in the 21st century, bound by history but not by love. This book won’t make you know Hillary any better. But it will help you understand why you don’t.”