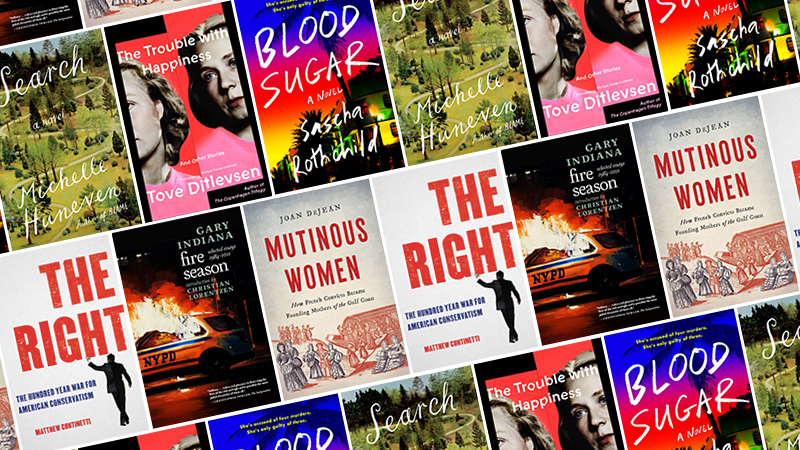 Tove Ditlevsen’s The Trouble With Happiness, Gary Indiana’s Fire Season, and Sascha Rothchild’s Blood Sugar all feature among the Best Reviewed Books of the Week.

“A Promising Young Woman meets Dexter thriller that’s both highly suspenseful and strangely empowering … [Rothchild’s] debut thriller successfully executes all the elements of a crackling mystery: page-turning plot beats, snappy dialogue…and vividly drawn characters. Readers will root for Ruby’s acts of vigilante justice toward toxic male figures while also questioning her reliability as a narrator. For those who love a fascinating, complicated female lead with more than one ax to grind, Blood Sugar is an absolute must.”

“… tracks a surprisingly amusing account of ecclesiastical politics in the age of ‘wokeness’ and, to a lesser extent, Dana’s own pursuit of spiritual and personal fulfillment … At book’s end, Huneven, a James Beard Award-winning food writer, serves up some of the recipes the group has enjoyed. It’s as mouthwatering an experience as reading Martin Walker’s Bruno, Chief of Police mysteries, in which Bruno whips up French classics in the Dordogne … Dana’s own observations are spiced with wit … on balance a novel whose humor works because it is so plausible. Though thick with satirical moments, it is not quite a satire, since Huneven has too much respect for all her seekers. She stops just short of reducing them to stereotypes and regards their search as earnest, despite all the bruised egos, dead ends and outright silliness. Even the fierce cadre of the young is observed with as much fondness as ridicule.”

3. The Trouble With Happiness by Tove Ditlevsen
(Farrar, Straus and Giroux)

Read a story from The Trouble With Happiness here

“… [a] quiet and devastating collection of vignettes … The stories are simple; the characters ordinary and immensely human. Their motivations are mysterious and subtle, and Ditlevsen is acutely sensitive to the way normal life can wear at their hearts. Readers will recognize the themes of anger, disappointment, and frustration that recur within the author’s universe. Alongside this discomfort, though, is the opportunity for deep transformation. Already renowned for her memoirs, Ditlevsen is now poised to win acclaim as a master of short fiction.”

“Few writers are as keenly alive to absurdity or write with as sharp a pen as Gary Indiana, whose new essay collection, Fire Season, spans almost forty years of stellar criticism … His interests are expansive … When I was at university in the mid-Eighties and setting out in the world soon thereafter, Indiana’s sensibility, and indeed his canon, were formative for my cohort, and it’s enormously pleasurable to revisit his brilliant mind … Perhaps the central feature of Indiana’s writing remains its elegant and astringent wit. At times, this can look like nastiness; but just as the difference between the erotic and the pornographic is said to be that the latter is gratuitous, so too is strong critique distinct from simple nastiness in being purposeful … Indiana also turns his stinging clarity on living subjects … Some pieces may read differently now than when they were first published, as the urgency of the avant-garde has been subsumed by the inescapability of mass media. And it’s true that Indiana’s work can feel not wholly contemporary, insofar as it refuses ever to be nice. This, thank goodness, ensures its timelessness.”

“Gripping from its opening scene … Through astounding research in French and Louisiana archives, including police files from the women’s arrests and trials, Ms. DeJean, a French literature professor at the University of Pennsylvania, reconstructs the lives of nearly every one of these largely unknown women … Ms. DeJean uses her knowledge as a scholar of early modern France to great effect. Paris comes alive as a place where women and men lived and died, trying to take care of themselves and their families … By discovering these poor women from the colonial past, Mutinous Women conveys a fascinating history and a reminder that all kinds of people helped to build what became the United States.”

3. The Right: The Hundred-Year War for American Conservatism by Matthew Continetti
(Basic Books)

“Continetti seems less interested in the numbers of politics than in its ideas, and the tension between them is the driving force of The Right … Continetti revisits [William F.] Buckley’s greatest hits: how he pushed out the fringe elements of mid-century conservatism; how he helped usher in ‘fusionism,’ the blend of economic and cultural conservatism that Frank Meyer articulated in National Review; and how he ‘mainstreamed’ American conservatism … Yet to his credit, Continetti does not canonize Buckley … [Continetti and another conservative author] not only write history; they take solace in it. Their works can illuminate the paths forward for party and movement, though only to a point. History, after all, is not an interested party. But it can be an interesting one.”