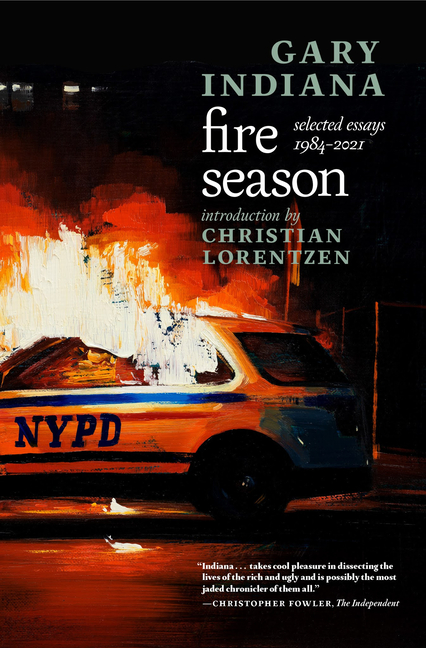 Whether he's describing Tracy Emin or Warhol, the films of Barbet Schroeder or the installations of Barbara Kruger, Indiana is never just describing. His writing is refreshing, erudite, joyful. Indiana champions shining examples of literary and artistic merit regardless of whether the individual artist or writer is famous; asserts a standard of care and tradition that has nothing to do with the ivory tower establishment; is unafraid to deliver the coup de grâce when someone needs to say the emperor has no clothes; speaks in the same breath—in the same discerning, insolent, eloquent way—about high art and pop culture.

What The Reviewers Say
Rave Claire Messud,
Harper\'s
Few writers are as keenly alive to absurdity or write with as sharp a pen as Gary Indiana, whose new essay collection, Fire Season, spans almost forty years of stellar criticism ... His interests are expansive ... When I was at university in the mid-Eighties and setting out in the world soon thereafter, Indiana’s sensibility, and indeed his canon, were formative for my cohort, and it’s enormously pleasurable to revisit his brilliant mind ... Perhaps the central feature of Indiana’s writing remains its elegant and astringent wit. At times, this can look like nastiness; but just as the difference between the erotic and the pornographic is said to be that the latter is gratuitous, so too is strong critique distinct from simple nastiness in being purposeful ... Indiana also turns his stinging clarity on living subjects ... Some pieces may read differently now than when they were first published, as the urgency of the avant-garde has been subsumed by the inescapability of mass media. And it’s true that Indiana’s work can feel not wholly contemporary, insofar as it refuses ever to be nice. This, thank goodness, ensures its timelessness.
Read Full Review >>
Rave Jennifer Krasinski,
4Columns
The intellect of playwright, novelist, essayist, and critic Gary Indiana is notoriously brawny and sure-footed, ranging across, to borrow his words, 'the queasy context of the modern world' with an assurance and elegance largely unfamiliar to our era’s torrential toadyism and its twin, cancellation ... A triumphant collection ... Appreciated on the level of his sentences alone, Indiana is a lapidary wielding a straight razor ... Fire Season is in fact full of admiration, even terrific tenderness, for many of its subjects, proving throughout what an exacting reader he is of character. No contradictions are left unturned ... What becomes clear in reading this collection is that American culture is so habituated to bright-siding, readers can lose sight of the fact that venom, administered appropriately, is medicine ... Giggling, shuddering, even at times a little nauseous, I found myself only once dissenting from Indiana, not because of his point-blank candor, but because I perceived him to humble himself uncharacteristically and unnecessarily ... Indiana’s hungry readers will devour these essays and lick their chops, feeling satisfied as they wait for more from him.
Read Full Review >>
Rave Daniel Felsenthal,
Frieze
Indiana inhabits his role with fangs on. His famously antagonistic addresses to the reader...are as calculated as a Rainer Werner Fassbinder film: nothing is truly raw, disdain for bourgeois values is inbuilt and every depiction feels art-directed with decadent grime in mind ... This self-consciousness protects Indiana from feeling wooed by his own persona, as do the stresses of writing seriously in an economically precarious time ... Fire Season highlights his dogged reportage and erudite analysis far more than his shock value ... This latest release is less a surprise than a rich record of overlapping eras of history – ones coloured both by Indiana’s prophetic mind and the dread we bring to historical events in retrospect ... Fire Season is nothing if not high-minded ... As much a moralist as a bad boy, Indiana understands that the two positions enable each other, that they provide balance and nuance to what might be mutually thin shticks. This is, and has always been, his subtext: he raves like a wigged-out drunk so he can impart a message of compassion and progressivism, and the need for this acrobatic balance is an indictment of society at large.
Read Full Review >>
See All Reviews >>
What did you think of Fire Season: Selected Essays 1984-2021?
© LitHub | Privacy