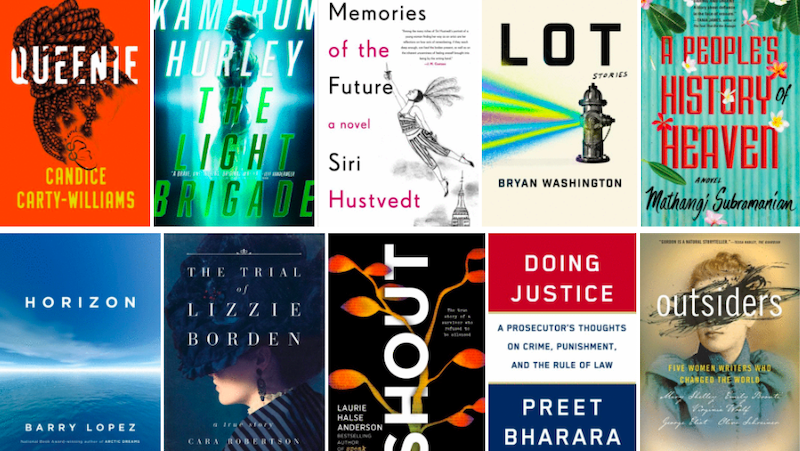 “Queenie as a tragicomic story of womanhood, updated for the Tinder age perhaps, with a black body occupying a space already familiar to its white predecessors. But that would be to profoundly underestimate this debut novel, which tells a far deeper story than the one it has been compared to … This is the fertile heart of Carty-Williams’ writing: complex dynamics of interracial friendship, of the gaps that exist between generations, layered with the specific intricacy of a Jamaican immigrant family and the blurring boundaries of workplace relationships, are spun into an entertaining seam … Carty-Williams has taken a black woman’s story and made it a story of the age.”

=1. The Light Brigade by Kameron Hurley

“…an important, critical look at the role of how war bends and warps modern society. It…has the potential to become the next great Military SF classic … Never does [the book] trade its thematic explorations for character development or vice versa—they are one and the same … The Light Brigade is a standout novel in Kameron Hurley’s already impressive career. It’ll get your pulse pounding, your blood boiling, and your heart aching. It’ll make you angry, scared, and, at the most unexpected moments, hopeful. The history of Military SF novels is long and storied, but Hurley’s work can stand up with the best of them.”

3. Memories of the Future by Siri Hustvedt

“Reading a Hustvedt novel is like consuming the best of David Lynch on repeat … Ideas somersault nimbly in the novel as memoir jostles with memories. Primarily, SH writes of a past of navigated possibility from a future of unforeseen jeopardy: in 2017, the established novelist laments the current political scene of progression lurching backwards. It is a point at which both SH and her creator appear, in this intense, high-spirited Bildungsroman, to have come full circle.”

Read an excerpt from Memories of the Future here

“Bryan Washington’s Lot is not only a stellar debut but also an essential blueprint to understanding America’s next best city … Covering the breadth of Houston’s infamous sprawl—chapters take their names from the city’s streets and neighborhoods—Lot manages to squeeze a whole world of cultural, political, and social issues into the macro-microcosm that is the place nicknamed Space City: racism, poverty, violence, drugs, gentrification, AIDS, the War On Terror, and anti-immigrant conservatism … Washington writes with as much warmth and humor as he does grit. Like the tiny shards of reflective, mirror ball-like material that flecks a pavement’s surface, Lot’s stories glow amid their own inherent darkness … Lot is not only the story of Houston, it is also your story, my story, our story. A sorrowful tale, a hopeful story, a beautiful gift—the song of America today.”

5. A People’s History of Heaven by Mathangi Subramanian

“The novel centers on lives defined by femaleness and the ways individuals can find or break themselves against the locks that designation provides … Nonetheless, they fight for futures and everyday adventures. Spending time with this fearsome five is also just plain fun … Slum life is never romanticized. The narrator, an unnamed member of the girls’ inner circle, delivers enough cynical wisdom and pithy commentary to show just how wise these girls are to their plight without dismissing how insidious cultural messages are … forefronts human dignity and the intelligence it takes to survive at the intersection of so much society uses to set people apart, while also making it clear that, ‘in Heaven, anger is not about any one person. It’s about the whole world.'”

“In this epic travelogue, nature writer Barry Lopez’s slow but steady observations of a magnificent but damaged planet mirror the slow but steady exploitation of its resources and the extent of human suffering such a feat requires. Horizon is a book with no central horizon, and for that we should be grateful. You could ask for no better travel guide as long as you are open to the possibilities of tangential paths and his ‘capacity for wonder’ … Lopez is a thoughtful and careful curator, sweeping the planet to understand not only its topography but also the cultural geography of humans and the relationship between the two.”

2. The Trial of Lizzie Borden by Cara Robertson

“Lawyer Robertson debuts with the definitive account to date of one of America’s most notorious and enduring murder mysteries … Robertson methodically rebuts the numerous theories advanced at the time and since … The end result is a superior, page-turning true crime narrative that will leave most readers believing that the jury got it wrong.”

“In the final section, Anderson’s focused, first-person narrative becomes more of a chorus as she recounts the stories that readers, female and male, adults but especially teenagers, have shared with her about their own experiences with sexual assault and harassment. The classroom benefit of this book is undeniable—it’s a primer on writing and on living, and both Speak and Anderson’s effect on teens has never waned. But more than that, it is a captivating, powerful read about clawing your way out of trauma, reclaiming your body, and undoing lifetimes of lessons in order to use your voice as the weapon it is. Fervent and deafening.”

=3. Doing Justice: A Prosecutor’s Thoughts on Crime, Punishment, and the Rule of Law by Preet Bharara

“He’s tough, smart, and funny. He does not condescend to readers without legal credentials … He tells riveting stories from real-life experience and attributes his near-perfect record as a federal prosecutor to the hard work and preparation that his team invested in achieving convictions in cases such as the Madoff/JPMorgan Chase Ponzi scheme and a scam defrauding a fund for Holocaust survivors … Preet Bharara writes that you will not find God or grace in legal concepts or in formal notions of criminal justice. But be assured that you’ll find God and grace in this fascinating book.”

“Thought-provoking … Gordon is an imaginative and rigorous biographer who has already addressed the lives of Wollstonecraft, Charlotte Brontë and Woolf in full-length books, but the pleasure in this compact volume is the way in which she weaves these lives together, building links across the generations … One of Gordon’s strengths is always to recognise the tension inherent in biography’s form: finally, how can we know anything? Evidence of anyone’s life is only ever fragmentary … The truth of these artists’ lives can be found in their writing, and it is to their writing that Gordon listens, closely, attentively, always resisting easy biographical links.”