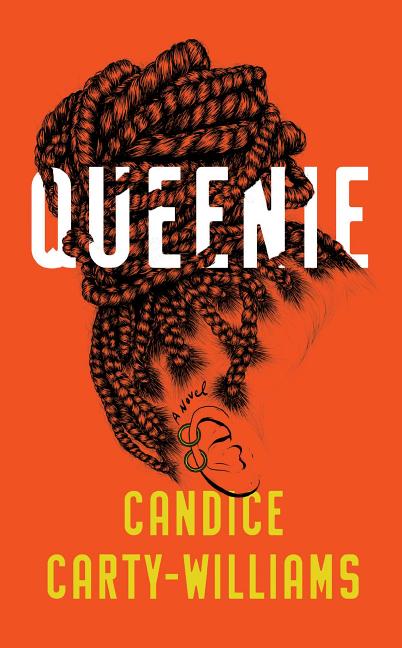 Queenie Jenkins is a 25-year-old Jamaican British woman living in London, straddling two cultures and slotting neatly into neither. She works at a national newspaper, where she’s constantly forced to compare herself to her white middle class peers. After a messy break up from her long-term white boyfriend, Queenie seeks comfort in all the wrong places.

What The Reviewers Say
Rave Afua Hirsch,
TIME
Queenie as a tragicomic story of womanhood, updated for the Tinder age perhaps, with a black body occupying a space already familiar to its white predecessors. But that would be to profoundly underestimate this debut novel, which tells a far deeper story than the one it has been compared to. Candice Carty-Williams, a young Londoner, has a flair for story-telling that appears effortlessly authentic. Her title character is a woman you both know and cannot forget ... Carty-Williams manages to engage the head and the heart, plunging the reader into Queenie’s descent, while simultaneously helping us unpack it ... This is the fertile heart of Carty-Williams’ writing: complex dynamics of interracial friendship, of the gaps that exist between generations, layered with the specific intricacy of a Jamaican immigrant family and the blurring boundaries of workplace relationships, are spun into an entertaining seam ... Carty-Williams has taken a black woman’s story and made it a story of the age.
Read Full Review >>
Rave Kate Saunders,
The Times
... superb ... Lurking just beneath the glittering, fast-paced surface of the story are all sorts of disturbing things ... I have never read a novel that shows the experience of everyday, low-level racism so vividly, or so convincingly ... a funny, clever, heartbreaking lightning bolt of a first novel, by a writer bristling with talent.
Read Full Review >>
Rave Stephan Lee,
Newsday
...[a] hilarious, heart-shattering, deeply lovable novel ... If Queenie sounds a little like 2019’s answer to Bridget Jones’ Diary, there are a few surface-level commonalities ... She’s an exceedingly charismatic narrator, giving the reader full access to her texts, emails, and a list of New Year’s resolutions...every bit as memorable as Bridget's. But that’s pretty much where the similarities end. Debut author Candice Carty-Williams has created a truly one-of-a-kind heroine in Queenie, whose story is universally relatable without ever flinching in the face of challenging subjects that are more important now than ever ... Refreshingly, Carty-Williams forces nothing in Queenie’s life into tidy bundles — not the pile of braids on her head, not her mental health struggles, not her relationships ... All hail Queenie.
Read Full Review >>
See All Reviews >>
SIMILAR BOOKS
Fiction

Fake Accounts
Lauren Oyler
Positive
What did you think of Queenie?
© LitHub | Privacy