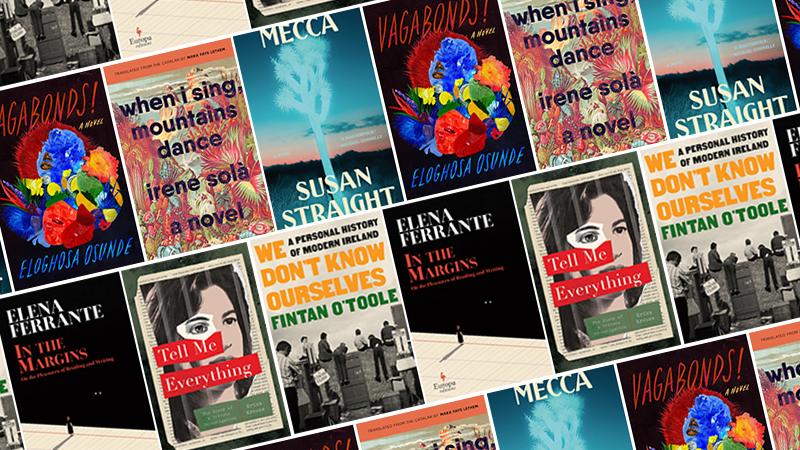 Elena Ferrante’s In the Margins, Susan Straight’s Mecca, Fintan O’Toole’s We Don’t Know Ourselves, and and Eloghosa Osunde’s Vagabonds! all feature among the Best Reviewed Books of the Week.

“The novel’s scope is vast…But Straight also delves into the intimate, often unseen recesses of a hidden California—old canyon homes that remain as the last traces of citrus labor camps, a courtyard community of Oaxacan families that thrives behind a curtain of morning glory in one of Los Angeles’s densest neighborhoods … Through the interwoven narratives of Johnny, Matelasse and Ximena, Straight showcases intricate intersections of personal and familial histories to create a wide and deep view of a dynamic, multiethnic Southern California … One of the most notable aspects of Mecca is Straight’s attention to how characters negotiate their racial identities through language … Straight is an essential voice in American writing and in writing of the West, and Mecca is a meaningful addition to this canon. She heralds important ways of storytelling that shift how we see the land and one another. The numerous catastrophes over the past few years, including climate crises and racial conflict, have demanded that Americans re-evaluate our relationships to nature, to the environment, to history. With unflinching courage and grace, Straight pushes deeper into these difficult territories and transforms us in the process.”

Read an excerpt from Vagabonds! here

3. When I Sing, Mountains Dance by Irene Solà
(Graywolf Press)

“… depicts the griefs and joys of one human family against the vibrant backdrop of the Pyrenees mountains where they live. With its crisp prose, compassionate eye, and emotional precision, Solà’s novel pays tribute to the interconnectedness of the natural world. When I Sing, Mountains Dance illustrates that when we step back to see those connections, our own lives take on greater meaning … Solà encourages us to view the world from more than just a human perspective … Solà invites us to settle into each perspective—and, in doing so, to feel as much sorrow for the frightened fawn skittering away from the gunshot as we do for Hilari’s death … Solà also encourages temporal empathy by zooming in and panning out, challenging human conceptions of time … Solà’s kaleidoscopic technique offers perspective on Sió’s grief but does not diminish it. When I Sing, Mountains Dance triumphs because Solà gives voice to many perspectives and, in doing so, infuses the human characters’ experiences with greater poignancy.”

1. We Don’t Know Ourselves: A Personal History of Modern Ireland by Fintan O’Toole
(Liveright)

“We Don’t Know Ourselves…may appear a daunting doorstopper of a book, but it is leavened by the brilliance of O’Toole’s insights and wit, and by the story of his own life, which he expertly intertwines into a larger historical narrative. O’Toole’s Ireland is, familiarly, a nation of grand myths and discordant realities … O’Toole…sees the country’s shift with an eye that is simultaneously critical and compassionate … He returns repeatedly to Ireland’s ties to the United States, and astutely interprets moments such as John F. Kennedy’s 1963 visit … O’Toole’s account ranges well beyond historical grandees to include minor celebrities … frank moments punctuate this dense book, and these, more than strict reminiscence, constitute the personal nature of his history. O’Toole’s is a wildly ambitious project, one that accounts for inevitable partiality precisely through this invocation of the personal. It is a winning gambit.”

2. In the Margins: On the Pleasures of Reading and Writing by Elena Ferrante
(Europa Editions)

“In this and in other works, Ferrante reminds us what a gift anonymity can be to the reader. How refreshing to access words without fighting through the obscuring fog of a ‘brand’ … For those who wish to burrow gopher-like into the author’s mind, Ferrante has prepared a tunnel … As much as In the Margins, is a philosophical monograph on the nature of writing, it is also a practical manual. Ferrante furnishes tips. She doesn’t present them as such—there’s no prescription, only an outline of what she’s learned and how it’s helped her (and by implication, how it might help anyone else).”

3. Tell Me Everything: The Story of a Private Investigation by Erika Krouse
(Flatiron)

“… beautifully written, disturbing and affecting … This is literary nonfiction at a high level. Fans of true crime might be disappointed in the eccentricities of the writer, who regularly finds reason to detail, say, drought conditions in Colorado, instead of giving a straightforward accounting of crimes and cover-ups…The book swirls around major sexual issues of our day—consent, college rape culture, institutional accountability—without ever feeling preachy or didactic. Instead, we get beautiful sentences that leap out of nowhere … In detailing her own trauma, Krouse is unsparing…I found myself gasping at some moments involving her mother, the pain heightened by tenderness … There are occasional false moments, too. The author sometimes drops into hard-boiled noir tropes that feel at odds with the tone of the book. And occasionally the story reads like a creation myth for a hero P.I. … At first, I worried that the dual narratives of Krouse’s personal story and the football team’s rape case wouldn’t coalesce. Sadly, they fit together all too well.”