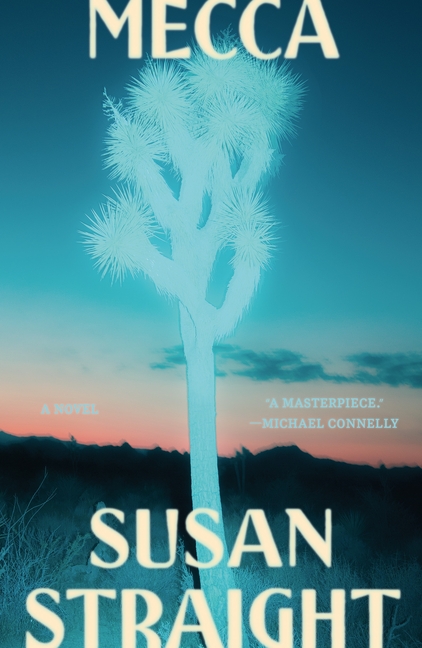 The author of Highwire Moon returns with an epic novel following several diverse Californians as they grasp for air in a world that continues to marginalize them.

What The Reviewers Say
Rave Lauren LeBlanc,
The Boston Globe
... a big-hearted and often wrenching saga ... The act of listening and the powerful precision of language surface again and again in Mecca as the narrative shifts from Johnny Frias to Ximena, an 18-year-old undocumented immigrant whose journey from Mexico to California cost her the life of her brother and left her pregnant after being assaulted by a coyote, as human smugglers are known ... Throughout Mecca, Straight laces her stories with language in Mixtec and Spanish without translation for the monolingual English-speaking readers. While this may frustrate some, the sensation of mystery and the need to read around the dialogue for clues and tone placed me in the mind of those who are forced to submit to English at all times ... Straight never shies away from large themes and historical significance across varied time periods ... Here, as in all her books, she elevates the lives of extraordinary everyday people whose lives speak to a universal fragility and pride ... At many moments, the book’s cumulative impact made it necessary to set the book aside to collect myself before continuing. Without question, I’d pick it up again. Taking Johnny’s dictum to listen and wait to heart, one can and should pause to let the novel’s tremendous scope settle.
Read Full Review >>
Rave Carribean Fragoza,
The New York Times Book Review
The novel’s scope is vast...But Straight also delves into the intimate, often unseen recesses of a hidden California — old canyon homes that remain as the last traces of citrus labor camps, a courtyard community of Oaxacan families that thrives behind a curtain of morning glory in one of Los Angeles’s densest neighborhoods ... Through the interwoven narratives of Johnny, Matelasse and Ximena, Straight showcases intricate intersections of personal and familial histories to create a wide and deep view of a dynamic, multiethnic Southern California ... One of the most notable aspects of Mecca is Straight’s attention to how characters negotiate their racial identities through language ... Straight is an essential voice in American writing and in writing of the West, and Mecca is a meaningful addition to this canon. She heralds important ways of storytelling that shift how we see the land and one another. The numerous catastrophes over the past few years, including climate crises and racial conflict, have demanded that Americans re-evaluate our relationships to nature, to the environment, to history. With unflinching courage and grace, Straight pushes deeper into these difficult territories and transforms us in the process.
Read Full Review >>
Rave Ron Charles,
The Washington Post
﻿Straight’s characters are the backbones of agriculture, health care and hospitality — those people of color who pick, wipe and disinfect for long hours on low wages. Through the tinted windows of a speeding Mercedes, their communities may look as plain as the desert, but under Straight’s capacious vision, they appear in all their vibrant humanity ... Mecca is, among many things, a shrewd deconstruction of racial categories and the racist assumptions built upon them. Straight tackles not only the way prejudice motivates violence but the way it distorts the response to violence ... The novel’s structure cleverly reflects this diversity: The chapters move from character to character, some with first-person narrators, some with third. One particularly devastating chapter written in the second person, you will never forget ... Between the poles of these two ambiguous crimes — committed 20 years apart — Straight strings the details of a terrifically engaging novel about a network of people related by blood, love and duty. A subplot detailing the way children struggle with loneliness during the covid pandemic is heartbreaking. Another one involving a mother’s response to a police shooting is a tour de force that could spin off and persist on its own as a classic short story ... But what might be most impressive about this novel is how large it becomes without ever feeling bloated by extraneous plotlines or too neatly sewn up. Instead, what initially appears to be a disparate collection of experiences gradually develops interweaving tendrils to create a celebration of families — a celebration made all the more poignant by the constant threat of being separated, exiled, wounded or even killed. Remarkably, the most persistent impression here is not one of suffering but of determined survival, even triumph.
Read Full Review >>
See All Reviews >>
SIMILAR BOOKS
Fiction

Kaleidoscope
Cecily Wong
Rave
What did you think of Mecca?
© LitHub | Privacy