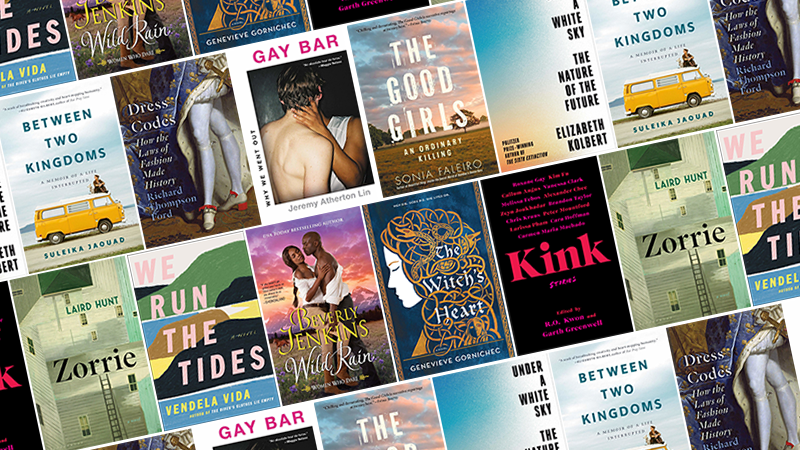 Vendela Vida’s We Run the Tides, R.O. Kwon and Garth Greenwell’s Kink, Sonia Faleiro’s The Good Girls, and Beverly Jenkins’ Wild Rain all feature among the Best Reviewed Books of the Week.

1. We Run the Tides by Vendela Vida
(Ecco)

Read an excerpt from We Run the Tides here

“… exhilarating, maddening, thoroughly entertaining … In a book full of narratives, some more imaginative and convoluted than others, often conflicting, sometimes heart-breaking, Vida holds her own narrative steady with Eulabee’s distinct voice. While she’s got some all-too-human blind spots, Eulabee is pretty clued-in and clear-eyed about others’ actions, and her unusual sense of humor comes hand-in-hand with a healthy dose of scepticism, particularly when it comes to adults’ foibles and faults. (She’s downright funny too) … With its tangible, tactile details peppered throughout and super-smart, quirky Eulabee at its helm, We Run the Tides is deceptively sweet—and as addictive as candy.”

“For those who hesitate to delve into African-American historical romances for want of that visceral fantasy element, Beverly Jenkins’s novels—richly grounded in history and yet bristling with joy—are a revelation … The signature elements of Jenkins’s work come together in spectacular form in Wild Rain, a boldly feminist narrative … Garrett is the rarest of Black romantic heroes: the cinnamon roll. In historical romances, Black men are rarely afforded the space to be soft, sweet and supportive heroes who dote on their women and don’t mind when they take the reins (literally, in this case). But Garrett is all of those things and it never diminishes him. The way he cares for, loves and stands up for Spring while also knowing when to stand down only makes him more appealing … Watching her lean into loving him and vice versa is pure pleasure, a powerful, indulgent treat … showcases Jenkins’s talent for writing intriguing individual stories that illuminate bigger historical themes … With so much going on, and a pace that propels the reader relentlessly forward, some things get short shrift. Love arrives rather quickly and abruptly for one of the characters. And, outside of a few long-running grudges, some of the conflicts resolve too easily. Still, if Wild Rain doesn’t quite rise to the heights of Beverly Jenkins masterworks like Indigo and Forbidden, it is incredibly satisfying in its own right.”

“… both staggering in its beauty and delicate in its execution as it takes the Norse characters and stories we are so familiar with and shoves them to the background. Gone are the death-defying feats of Odin and nearly invisible is the quick-tempered Thor. In their stead, Gornichec highlights the overlooked witch Angrboda, Loki’s mate and the mother of monsters … Gornichec’s work is not a book of swashbuckling Viking adventure. Rather, it is a character study of a woman whose story has otherwise been relegated to but a few sentences of mythology.”

“… sexy, star-studded … The characters in these stories illuminate the ways gender, politics, and cultural norms inform power dynamics—inside and outside the bedroom. The collection’s strength lies not just in the diversity of the writers, but also in the experiences they’re exploring. Kink, desire, and sexuality all exist on a spectrum, and so do these stories … The at-times explicit collection won’t be for everyone, but these candid, slinky stories are sure to find their audience … Thrilling, provocative, and unapologetically kinky.”

Read an excerpt from Zorrie here

“… lovely … a virtuosic portrait of midcentury America itself—physically stalwart, unerringly generous, hopeful that tragedy can be mitigated through faith in land and neighbor alike … Hunt is not shy about his elegant ambitions with this small novel. The epigraph is from Flaubert’s A Simple Heart. The chapter titles are from Virginia Woolf’s The Waves. This is not fiction as literary uproar. This is a refined realism of the sort Flaubert himself championed, storytelling that accrues detail by lean detail … Hunt’s prose is galvanized by powerful questions … What Hunt ultimately gives us is a pure and shining book, an America where community becomes a ‘symphony of souls,’ a sustenance greater than romance or material wealth for those wise enough to join in.”

2. Under a White Sky: The Nature of the Future by Elizabeth Kolbert
(Crown)

“… an arresting montage of just how hard it is to return balance to our exquisitely interconnected biosphere, and the extraordinary efforts people go to in the attempt … this is Kolbert at her most compelling — producing visceral, engrossing journalism with clear explanations of both science and social context … An element of the ridiculous is ever-present in the dance between human hubris and desperation. Kolbert orchestrates this comic strand with aplomb, never sacrificing empathy or the humanity of her characters. It is only a shame that the focus is entirely on problems and solutions in rich countries, given the global nature of the Anthropocene and the inequity of its burdens … There’s a grim fatalism to all this. We are so far down this path of global change that to turn back now is unthinkable, even impossible—like the old lady of the rhyme, who inevitably swallows the horse. Kolbert lays out this paradox perfectly. But she does so in the detached manner of an observer: always the reporter, documenting events but never asserting her own opinion. The book ends abruptly when the coronavirus ruins her plans for further research trips, leaving as much unresolved within its pages as outside them. It is, then, a superb and honest reflection of our extraordinary time.”

3. Between Two Kingdoms: A Memoir of a Life Interrupted by Suleika Jaouad
(Random House)

“In the beginning, we treated the pandemic as a suspended time between two realities, hoping we could hold our breath and wait for things to resume. Between Two Kingdoms, by Suleika Jaouad, has arrived as a guide to another kind of in-between, with haunting similarities … There are times the pacing plateaus, where length dilutes urgency, but I was immersed for the whole ride and would follow Jaouad anywhere. Her sensory snapshots remain in my mind long after reading … Not only can Jaouad tolerate the unbearable feelings, she can reshape them into poetry … Her writing restores the moon, lights the way as we learn to endure the unknown.”

4. Dress Codes: How the Laws of Fashion Made History by Richard Thompson Ford
(Simon and Schuster)

“…provide[s] a long-overdue course correction…on the rules, both written and unwritten, that govern what people put on their bodies and so much more … Dress Codes focuses an even wider lens on what we wear, and on what influences those choices. Taking readers around the world from the 1200s to today, Ford embarks on an ambitious and comprehensive exploration of how fashion has been used by people both with and without money and power … Moving closer to the present, a chapter on resistance provides an in-depth analysis of the clothes worn during the civil rights movement of the 1960s … Ford’s writing is steeped in extensive research and makes what could be a dull history lesson about fashion a deeply informative and entertaining study of why we dress the way we do, and what that tells us about class, sexuality and power.”

5. Gay Bar: Why We Went Out by Jeremy Atherton Lin
(Little Brown and Company)

“[A] beautiful, lyrical memoir … Gay Bar dances on the edge of that third space between fiction and nonfiction, a space often reserved for poetry … Atherton Lin himself is rendered only in relation to the bars he walks us through; you’ll find yourself hard-pressed at the end to say where he was born or how many siblings he has (and you won’t care). But Atherton Lin has a five-octave, Mariah Carey-esque range for discussing gay sex … Gay Bar is well crafted […] with a strong authorial hand that makes the reader feel carefully shepherded through the text, even as Atherton Lin jumps decades and continents. The nonlinear chronology allows him to start in the present moment, cluing us in to a central truth of the book: We are always in the present … Atherton Lin’s final realization is that it may not matter why he went out (that question may not even be answerable) but the act of going out, of being in that particular ‘we’ in those particular bars, has made him—gloriously, irreparably—who he is.”