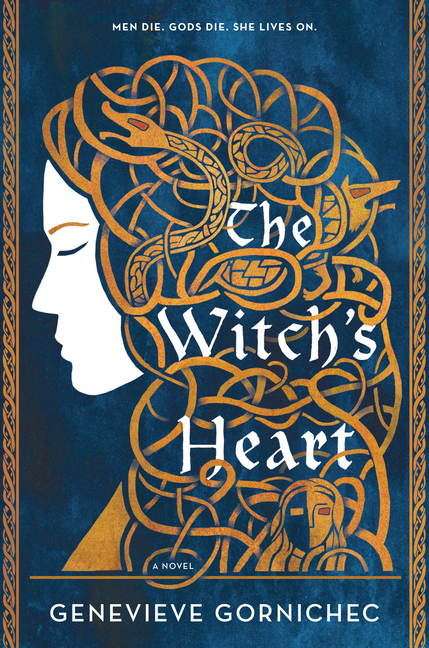 When a banished witch falls in love with the legendary trickster Loki, she risks the wrath of the gods in this debut novel that reimagines Norse myth.

What The Reviewers Say
Rave Laura Hubbard,
BookPage
... both staggering in its beauty and delicate in its execution as it takes the Norse characters and stories we are so familiar with and shoves them to the background. Gone are the death-defying feats of Odin and nearly invisible is the quick-tempered Thor. In their stead, Gornichec highlights the overlooked witch Angrboda, Loki’s mate and the mother of monsters ... Gornichec’s work is not a book of swashbuckling Viking adventure. Rather, it is a character study of a woman whose story has otherwise been relegated to but a few sentences of mythology ... invites us to swim in these details, lulling us with descriptions of a family dynamic that we know can’t possibly last ... And this is where the beauty of Gornichec’s work lives. She never denies the tragedy that is inevitable in any story of Norse mythology ... For some readers, the small scale of Gornichec’s novel and the focus on the inevitability of Ragnarök might be frustrating. After all, this story is not what we have been told to expect of tales of Vikings and witches. But to those readers, Gornichec offers this: instead of fighting the end, focus on the details and savor the life—and the change—that can be built in the cracks that fate has neglected.
Read Full Review >>
Rave Smart Bitches Trashy Books
... intense and magical ... Fans of Norse mythology might not get the same sense of surprise, but I think they will share my enjoyment of the rich world and characters ... This is a harrowing book which includes violence towards women (but not sexual violence), animals, and children. It is a tragic book in which almost all of the romances and other relationships are doomed. And yet it is also a profoundly optimistic book, in which crimes are (eventually) forgiven, enemies become friends, a friend becomes a lover, and generations of violence and trauma have the opportunity to start over in a happier light. I did not feel depressed by this book, although I was often worried about the characters and felt sad and angry on their behalf. I felt inspired by the beautiful writing and the main character’s resilience, and touched by the evolution of the various relationships, and warmed by the hope implied in the final pages ... The characters in the book are fascinating, and several go through intense and interesting arcs. Almost all of the main characters are women and their relationships are complex and powerful ... When there is a fight scene, it is vivid and suspenseful. The book also deals with LGBTQIA relationships in a positive manner and it places friendships between women front and center ... While I want to warn readers that violent and sad things occur, this was one of the most seamless, absorbing books I’ve read in a very long time. I loved the characters, the plot, and the writing. I love books that encourage me to learn about a new thing, and this one spurred me to seek out more Norse mythology ... The sense of place and real physical needs of the characters created a grounded, beautiful world, which made the more fantastical elements of the story feel all the more realistic. The prose was stunning and the protagonist someone I wanted to spend all my time with. This was a perfect read for a cold, rainy January. I will enjoy re-reading this book for years to come.
Read Full Review >>
Rave Anna Burke,
The New York Journal of Books
... breathes life into the women of Norse mythology with nuance and wit, ensuring the novel an enduring place in readers’ hearts—and shelves ... fill[s] in the gaps of myth with prose that is delightful, at times surprising, and epic from start to finish ... gripping, evocative, and alternatingly joyful and heart-breaking. Gornichec’s prose is lyrical and fierce, just like her protagonists. She works within traditional mythic prose parameters while also modernizing the language for a contemporary audience. Her dialogue is especially vivid ... Never anachronistic despite the contemporary feel, the freshness of the exchanges between the characters brings their personalities into sharp relief ... The humor in Gornichec’s dialogue is rarely the laugh-out-loud variety, but its consistency offsets the occasionally tragic turn of events, tossing the reader a lifeline ... This isn’t to say the tragedies lack depth—far from it. Angrboda’s heartbreak is palpable and gut wrenching, and even though the reader knows how the story must end, thanks to Angrboda’s gift of foresight, Gornichec manages to surprise ... Her pacing is tight, turning the domestic into adventure and adventure into quest, with the stakes mounting ever higher. The moments of happiness and peace are few and far between, and the reader longs for more. However, Gornichec understands that conflict drives plot. Her pacing never flags, and readers, unsatiated, will enjoy the bitter sweetness of the ending all the more.
Read Full Review >>
See All Reviews >>
SIMILAR BOOKS
Fantasy

The Helm of Midnight
Marina Lostetter
Positive
What did you think of The Witch's Heart?
© LitHub | Privacy