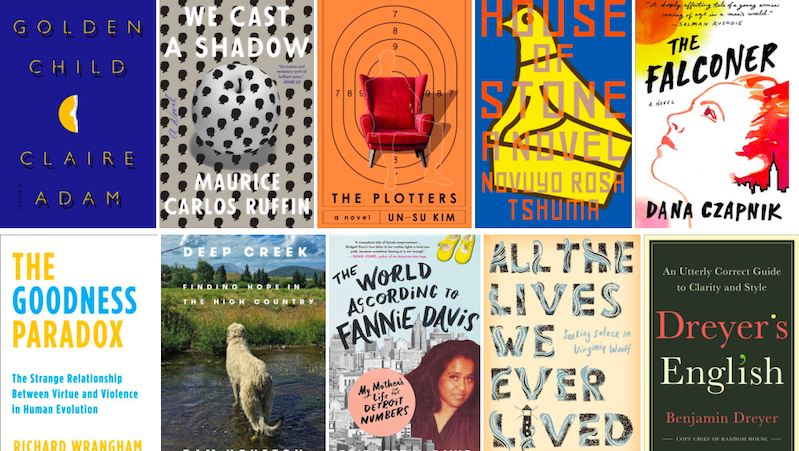 Featuring a dark satire of racism in America, an exploration of virtue and violence, a Seoul-set fantastical crime novel, and more

“.. Golden Child soon reveals itself as high-end literature. It has elements of a thriller, but remains rooted in imaginative and moral territory, with the tragic arc of an Arthur Miller play … Golden Child has more in common with JM Coetzee’s Disgrace, not only in its harrowing depiction of a father’s limitations, but also in its sense of rural life as a war of attrition. Unlike Coetzee, Adam’s writing doesn’t feel pessimistic or depressing. She writes with a dark, impacted intelligence. As soon as the book ends, you want to go back and pick out the lurking dangers and treacheries. This is a quiet explosion of a novel from a bright new voice in fiction.”

2. We Cast a Shadow by Maurice Carlos Ruffin

“Calling Maurice Carlos Ruffin’s We Cast a Shadow a satire seems less an accurate description than an effort to cushion the blows this novel lands with lethal precision … Given the frightful state of our nation, there isn’t enough satire in the world to outpace the madness heaped upon us daily. This is to Ruffin’s benefit. He can drive his story to the outer limits and beyond, and never lose the threads of bitter reality that make it so haunting. We Cast a Shadow soars on Ruffin’s unerring vision.”

“… [a] gripping portrait of a killer for hire … The Plotters is no primer for a visit to Korea. What it does offer is a vivid portrait of a mesmerizing central character—the stoic Reseng. It will also keep readers delightfully off-balance. In The Plotters Kim has mixed bookishness, crackpots and commissioned murder into a rich and unsettling blend.”

Read an except from The Plotters here

“Tshuma is incapable of writing a boring sentence: she inhabits her narration so totally that even the most absurd and silly actions become believable. The wordplay and absurdist plot lines act as comic relief, but the author never lets us forget the serious stuff even for a minute, and it is this balance that makes the book work. By the end she has managed to not only sum up Zimbabwean history, but also all of African colonial history: from devastating colonialism to the bitter wars of independence to the euphoria of self-rule and the disillusionment of the present. It is an extraordinary achievement for a first novel.”

=4. The Falconer by Dana Czapnik

“.. electric … Lucy’s fierce first-person point of view is as confident and fearless as she is on the court; she narrates her story with the immediacy and sharpness of a sports commentator, mixed with the pathos and wisdom of a perceptive adolescent charting the perils of her senior year of high school … Czapnik… captures nostalgia—for both a vanishing New York and Lucy’s evaporating childhood—with the lucidity of a V.R. headset … Reader, beware: Spending time with Lucy is unapologetic fun, and heartbreak, and awe as well.”

1. The Goodness Paradox by Richard Wrangham

“By giving a detailed comparison of human violence and aggression with that of our close primate relatives, Mr. Wrangham has given a possible explanation for how our species might have domesticated itself. That makes this book essential reading as geneticists start to unwrap the package of genes that responded to domestication, which may give hints about our own evolutionary history.”

“Wields scorching honesty and heartfelt reflection … [Houston’s] search for a home to make her own, far from memories and deeply entrenched in the history of the land’s pioneer past, took Houston through a literary reckoning that cuts to the bone while offering succor for a shattered youth. Always impressive, Houston is in striking form here. Her talent remains remarkable and her words extraordinarily affecting and effective.”

=3. The World According to Fannie Davis by Bridgett M. Davis

“Highly compelling … Placing her subject in the larger historical contexts of the African-American and urban experiences and the histories of Detroit and of underground entrepreneurship embodied in the Numbers, and framing it within numerous vital postwar trends, the author is especially insightful about how her mother embodied the emergence of a ‘blue collar, black-bourgeoisie’ … This is not a story about capitalizing on degeneracy. It is one of hope and hustling in a world where to have the former almost demanded the latter … This outstanding book is a tribute to one woman but will surely speak to the experiences of many.”

Read an excerpt from The World According to Fannie Davis here

=3. All the Lives We Ever Lived by Katharine Smyth

“Smyth pulls off a tricky double homage in her beautifully written first book, a deft blend of memoir, biography and literary criticism that’s a gift to readers drawn to big questions about time, memory, mortality, love and grief … a strong addition to a growing canon of hyper-literary memoirs.”

5. Dreyer’s English: An Utterly Correct Guide to Clarity and Style by Benjamin Dreyer

“His book is in love with the toothsomeness of language. Its sentences capture writing’s physicality … He takes a tinkerer’s joy in breaking apart syntax and putting it back together. Restrictive clauses are like Legos to him … Dreyer’s attention to gusto in language use is magical in a way that resists full explication … For Dreyer to wade into this process with news of pleasure is lovely.”