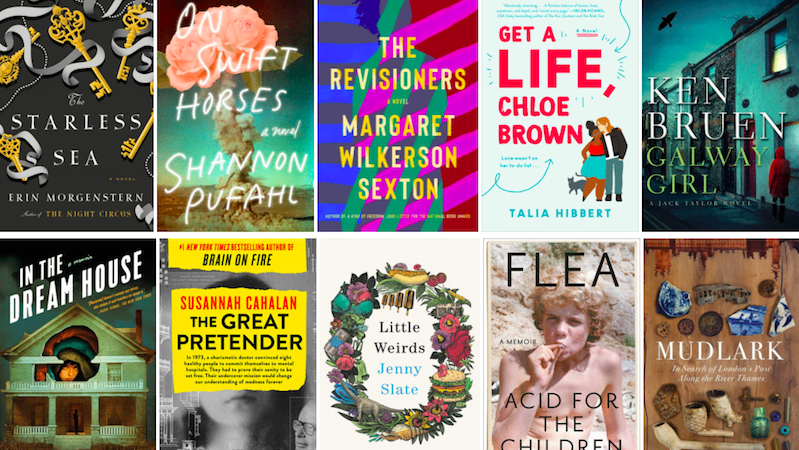 Erin Morgenstern’s The Starless Sea, Carmen Maria Machado’s In the Dream House, and Jenny Slate’s Little Weirds are among the most critically-acclaimed books of the past seven days.

1. The Starless Sea by Erin Morgenstern

“… extravagantly imaginative … Morgenstern’s major plot is the stuff of a bibliophile’s dreams, but she layers the narrative with snippets of fables and fairy tales, pieces in a meta-puzzle box that you may never figure out. Authorial flourishes and literary Easter eggs abound, allusions to illusions. There are nods to Tolkien and Sendak, Susanna Clarke and Lev Grossman, Grimm and Gaiman. The intricate world-building is nothing short of fabulous, the prose lush and filigreed. Still, it’s probably no accident that Patience and Fortitude, the lions at the entrance of the New York Public Library, make a cameo in the 500-page tale. Morgenstern knows every whichaway around story and myth, but you may well get lost in The Starless Sea. Bon voyage!”

2. On Swift Horses by Shannon Pufahl

“In Shannon Pufahl’s engrossing, melancholy debut novel, On Swift Horses, California feels both scrubbed new and thick with storm clouds … It’s practically axiomatic that every story set in 1950s America must be a critique of its squeaky-clean surfaces. On Swift Horses is no different. But it does it so skillfully—Pufahl’s prose is consistently lyrical and deeply observant. And her keenest observations are about the secrets we keep … Pufahl embraces noir’s mood while weaving in a love story. She evokes the fear and possibility of life in a new place, with new emotions. She writes with a grace and force that’s rare even among seasoned writers.”

=3. The Revisioners by Margaret Wilkerson Sexton

“…a powerful, deeply personal second novel … It’s rare for dual narratives to be equally compelling, and Sexton achieves this while illustrating the impact of slavery long after its formal end. Nurturing, motherhood, and pregnancy rise up as important themes. Readers will engage fully in this compelling story of African American women who have power in a culture that attempts to dismantle it.”

=3. Get a Life, Chloe Brown by Talia Hibbert

“… a tour-de-force romance that tackles tough problems like insecurity and chronic pain while still delivering a laugh-out-loud love story full of poignant revelations about human nature … Don’t be surprised at just how much you’ll empathize with their angsty backstories (hilarious delivery aside, Hibbert makes almost as strong a case against love as she does for it). And don’t think the answer here is that love cures pain and trouble. No, it’s more like the icing on the best cake you’ve ever wanted to devour … what gives this story its depth is Hibbert’s voice—you live each character’s pain, joy, laughter, love, longing. And when Red Morgan and Chloe Brown get into your head—good grief—there’s nothing like it.”

“… as sharp and sardonic as it is starkly bleak and violent, it shows the master raconteur at his best: lyrical, brutal, and ceaselessly suspenseful … That is the beauty of Bruen’s prose. He continues the poetry in many of his chapter breaks, and he sometimes quotes other authors who also have a poetic bent to their writing … Do not miss Galway Girl, a novel that shows Ken Bruen’s writing at its finest and Jack Taylor’s life at its gruffest.”

“What could seem gimmicky—I confess I braced myself at first—quickly feels like the only natural way to tell the story of a couple. What relationship exists in purely one genre? What life? … a hive of frenetic experimentation, tactics and tricks … There is something anxious, and very intriguing, in the degree of experimentation in this memoir, in its elaborately titivated sentences, its thicket of citations. The flurry—the excess—feels deliberate, and summons up the image of the writer holding a ring of keys, trying each of them in turn to unlock a resistant story, to open a door she might be hesitant to enter … written into the silence surrounding violence in queer relationships, the silences around emotional and psychological abuse … a living archive of her own loving, idiosyncratic design.”

2. The Great Pretender by Susannah Cahalan

“Cahalan intersperses her research into the Rosenhan experiment with fascinating, and dispiriting, history about the mistreatment of mentally ill people throughout the ages … Cahalan is clearly passionate about the subject matter, and her outrage makes The Great Pretender an urgent, personal book. But she’s also an incredibly dogged investigative reporter, tracking every lead she gets fully and with a real determination to get to the truth. Her findings are undoubtedly discouraging, but they’re also undeniably important … She’s also an absolutely incredible writer. The Great Pretender reads, in parts, like a suspense novel, with the reader unable to stop turning the pages … The Great Pretender is an essential book, and a plea for the world to come to terms with the way we’re treating some of our most vulnerable people.”

“.. the oddness of this genre-defying book fits in nicely with the path [Slate] has set out for herself as a performer … A collection that relies so heavily on whimsy shouldn’t be this effective, but the emotions in it are so raw that delving into her words creates an intimate connection to the work … What does permeate these pages is a lot of heartbreak … This isn’t a collection that aims for wide appeal, and therein lies both its strength and its weakness. If it weren’t for Slate’s truly admirable writing chops, made more exuberant with her knack for fanciful descriptors, it could easily run the risk of coming off as precious … a strange read, an odd look into personal pain, but an engrossing one—what we get are no little insights but a big chunk of heart.”

4. Acid for the Children by Flea

“Reading this book is akin to having a conversation with the man himself: candid and stripped down, like hearing Flea speak his own story aloud, just as a memoir should be. There is a lyrical lilt to Flea’s prose. His voice is clear and authentic, without a tinge of pretension. His enthusiasm for life, the way that he has always been unapologetically himself, is evident through his writing. Despite being a self-defined ‘outsider,’ his purity of heart shines through, as he is clearly an individual full of kindness and empathy who seeks interconnectedness with those around him and with the universe on a larger scale. Perhaps most importantly, this memoir is utterly thought-provoking. It challenges assumptions. It reflects on the past, shining a light on how decisions have a ripple effect throughout our days. And it meditates on the beauty inherent in both life and those who walk through it with us.”

5. Mudlark: In Search of London’s Past Along the River Thames by Lara Maiklem

“Every drowned, unwanted or lost object is precious to Maiklem, who reveals, as she takes us downriver from Richmond to the Estuary, a preternatural sympathy for the broken, mud-caked and out of context … A custodian of the past, Maiklem’s relation to the life of the river is personal rather than scientific … Maiklem likes to kneel down with her nose inches from the foreshore: ‘I breathe in the muddy aroma of silt and algae and listen to the sound of water drying on the stones: a barely discernible fizz-pop as it evaporates and the lacquered shine turns to a powdering of fine grey silt.’ Her prose has none of the self-conscious sensibility that defines contemporary nature writing; her thoughtful sentences read as though she were talking to herself … There is nothing that Maiklem does not know about the history of the river or the thingyness of things … There is a great deal to learn from these pages, not least the insight that finding lost things is the best way of losing yourself. It is, above all, her wisdom that makes Lara Maiklem such restful company”