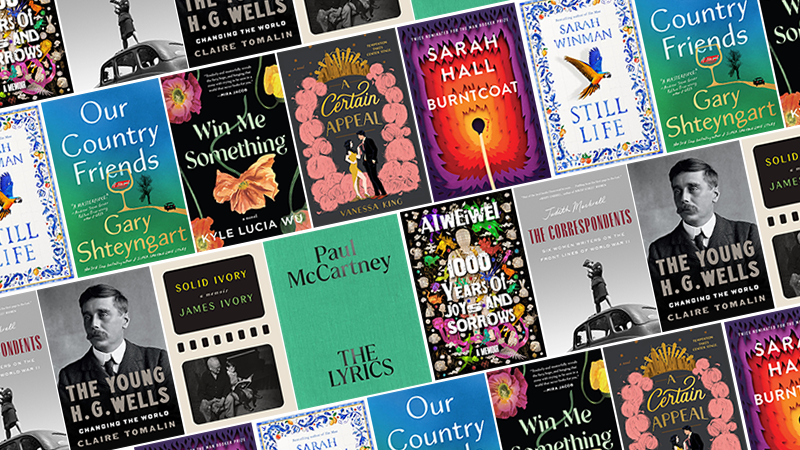 Gary Shteyngart’s Our Country Friends, Sarah Hall’s Burntcoat, Ai Weiwei’s 1000 Years of Joys and Sorrows, and Paul McCartney’s The Lyrics all feature among the Best Reviewed Books of the Week.

“Burntcoat is one of those new books with the unsettling quality of describing or approximating a great moment in history and its aftermath, as the reader is still living through it … This could be trite, but Hall manages to make it compelling, tragic, and still sensitive in its handling of a love story during a time of terrible social upheaval … Hall provides an achingly accurate description of an emotional and physical connection that feels as though it describes a whole life … The book is littered with symbolism … Burntcoat is a survey of a life at its very end, an odd autobiography of an artist whose life is marked by grief and the desire to create. Her artistic method is perhaps a bit of an overegged representation of this, a process which brings new life from destruction. It is immensely readable and beautifully told, so much so that, if you’re anything like me, you’ll read it deliberately slowly so as to prolong its life as much as possible.”

“The scope of Still Life is ambitiously wide and the historical and natural detail glorious … Winman’s bright and beautiful prose brings alive nearly a century of physical and social breaking and restoring in Europe, as Evelyn and Ulysses play out their long lives’ dramas … This luscious and clever book is at first glance simply a rollicking summer read, a Forster-lite romance bursting with pressed violets and sleeper trains and Baedeker and people playing Beethoven. It’s enough to make a Merchant Ivory fan squeal with delight. Yet Winman is playing a serious game as she traces the march of progress in postwar Europe through her brave, transgressive characters … Only a book as hefty as this can allow true character development to work its magic, and it’s a joy to witness several different thoroughly believable models of how lives can be resurrected and changed for the better.”

“Gary Shteyngart never strays far from the absurd … In his latest novel, Our Country Friends, Shteyngart convincingly demonstrates that large doses of caustic irony mixed with poignancy and melancholy may be the most effective tonic for coping with the lunatic mood swings so many of us have experienced since the virus first appeared … Shteyngart wields his satiric bite to good effect … Shteyngart deftly pivots from this hilarious, tragicomic parody to a mood closer to the wistful, elegiac tones of his beloved Russian master, Chekhov. Astute readers will also realize that in keeping with Chekhov’s principle that a gun placed on the stage must go off before the curtain falls, the coronavirus, too, will inevitably find a target … By novel’s end, Shteyngart’s flawed characters have absorbed lessons in humility, compassion and grief. And even though Shteyngart leaves too many loose ends curiously unexplained, his darkly brilliant comedy of love and folly gives us the absurd leavening we need to keep on laughing, and living, in covid’s all too tragic wake.”

4. Win Me Something by Kyle Lucia Wu
(Tin House Books)

“Wu’s novel, her first, tells Willa’s story with subtlety and compassion; it’s a literary debut that’s beyond impressive … Wu perfectly captures the feeling of being young and unmoored in a large city, unable to find close friends, and still carrying a dull pain from a childhood that was neither really happy nor unhappy … Wu intersperses scenes from Willa’s adulthood with ones from her past, and the flashbacks are masterfully done, depicting the alienation that’s haunted Willa for her entire life … filled with moments like that, quiet moments that pack a devastating emotional punch. The novel is perfectly structured; it’s clear that Wu has thought carefully about each sentence. It’s a book that’s filled with seemingly small moments that are actually anything but—Wu understands the human heart keenly, and her novel is a subtle but powerful triumph.”

“… a rompy and raunchy retelling of Pride & Prejudice—with a burlesque twist. The Jane Austen inspiration is clear, but debut novelist Vanessa King excels at infusing her own fresh voice and sparkling ideas into this contemporary romance … Liz is a confident and saucy heroine, always ready with a sly innuendo or a sharp, witty remark. It’s a torturous delight watching her unravel the starchy Darcy … a slow burn that keeps its momentum, even amid all the fun of King’s detailed, luxe descriptions of buzzing nightlife, sexy show performances and extravagant costumes … Fans of the source material will have an immeasurable amount of fun identifying all the Easter eggs within, from recognizable characters to dialogue that harkens back to the original text. King captures the magical feeling of seeing New York City awash in lights, and the electric hum of a rapt crowd during a live performance. There is something both cozy and thrilling about the Meryton and its found family of performers, and readers will be sad to leave them.” 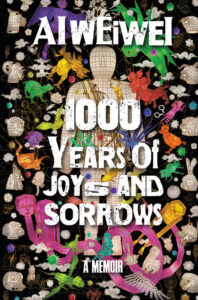 “[Ai Weiwei] is most eloquent when he stops pontificating on art and surrenders, almost despite himself, to the act of remembering. Ai writes evocatively of the nights spent in his detention cell … In 1000 Years of Joys and Sorrows, Ai does not allow his own scraps to remain buried. To unearth them is an act of unburdening, an open letter to progeny, a suturing of past and present. It is the refusal to be a pawn—and the most potent assertion of a self.”

Read an excerpt from The Correspondents here

“Immersive and revealing … Sparkling quotations from the reportage are woven throughout … Secondary characters including Ernest Hemingway, Eleanor Roosevelt, and Clare Boothe Luce make entertaining appearances, and Mackrell lucidly sketches military and political matters. The result is a rousing portrait of women who not only reported on history, but made it themselves.”

“Tomalin’s short, engaging biography is a welcome addition to the conversation … Ms. Tomalin paints a vivid picture of the upstairs-downstairs world of England’s class system, and how Wells’s experiences at Uppark shaped his views on the importance of a more just society … Ms. Tomalin dutifully untangles Wells’s wildly complex affairs … just as Wells crammed a lot into his full life, Ms. Tomalin crams a lot into this short biography. Occasionally, like a museum curator torn between arranging an exhibit chronologically or thematically, Ms. Tomalin opts for a mix, and the narrative lines get tangled. Too many precious pages are devoted to the history of the socialist Fabian Society, and to Wells’s relationship with its early members, Beatrice and Sidney Webb (founders of the London School of Economics) … Given the time and space constraints of Ms. Tomalin’s project, some gaps are to be expected. Even so, a look into a few of Wells’s disappointing later books might have strengthened her argument about the superiority of his earlier work … Ms. Tomalin segues nicely from a brief account of the demise of many of Wells’s friendships to a necessarily brisk overview of his later years and the tributes that followed his death. Her own tribute is full-hearted…Her book makes a strong case for Wells’s enduring importance.”

“… a collection of stories from a remarkable life and a glittering career…showcases Mr. Ivory’s caustic wit … Solid Ivorymay not make…naysayers see the light and acknowledge the supreme artistry of Howards End, A Room With a View and The Remains of the Day. However, they, along with the rest of us, may well be charmed and edified by Mr. Ivory’s insightful selection of scenes from memory and his absorbing self-portrait of an artist … One standout section entitled ‘Making Movies’ offers a fascinating look at Mr. Ivory’s craft … The section called ‘Portraits’…[is] somewhat disappointing … And yet despite these shortcomings there is still a lot to admire here … candid, informative and infused with warmth, verve and humor. Sit back and enjoy a series of well-executed master shots and captivating close-ups.”

5. The Lyrics: 1956 to the Present by Paul McCartney, Ed. by Paul Muldoon
(Liveright)

“.. the anthology is a feast for the eyes. Dyed-in-the-wool Beatles fans will be bowled over by the sheer profundity of unpublished photographs, previously unseen lyrics sheets, journal entries, paintings, and the like. Indeed, The Lyrics easily represents the finest collection of illustrations associated with McCartney’s life and work. And it’s beautifully rendered, to boot. Drop-dead gorgeous as books go, The Lyrics rivals the finest art imprints, including the handsome limited editions from the likes of Taschen and Genesis … Readers will enjoy the deep dives into more than 150 songs, and I, for one, was thrilled with the choices … If The Lyrics has an overarching weakness, it exists in the margins … there are a series of moments in The Lyrics, often literary in nature, that might seem like—dare I say it?—overreaching … That’s not to say that the attendant anecdotes and off-the-cuff musings are not powerful and affecting. As always, McCartney’s asides about his parents are simply lovely … In its finest moments, The Lyrics brings these key relationships to the fore, emphasizing the role that McCartney’s family has always played in his life—and yes, this most definitely includes his created family with the other Beatles and their circle … fetch me a more exquisite anthology this holiday season? I dare say you won’t find one.”