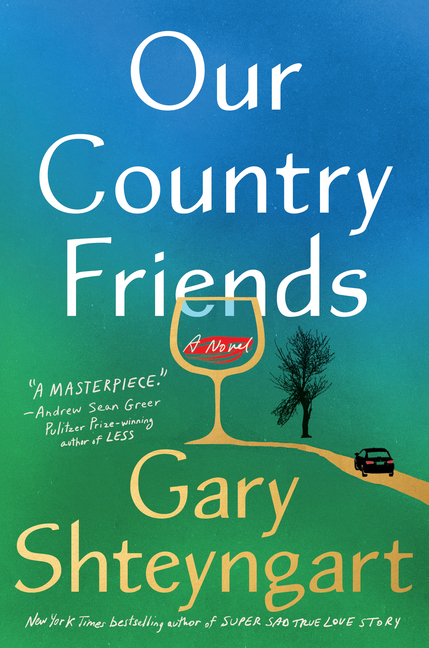 It's March 2020, and a group of friends and friends-of-friends gathers in a country house to wait out the pandemic. Over the next few months new bonds of friendship and love will take hold, while old betrayals will emerge among this unlikely cast of characters: a Russian-born novelist; his Russian-born psychiatrist wife; their precocious child obsessed with K-pop; a struggling Indian American writer; a wildly successful Korean American app developer; a global dandy with three passports; a young flame-thrower of an essayist, originally from the Carolinas; and a movie star, The Actor, whose arrival upsets the equilibrium of this chosen family.

What The Reviewers Say
Rave Dana Spiotta,
The New York Times Book Review
... reflective, earthy, humane ... rife with the problem of privilege, the profoundly leveling experience of the virus, and an ever-present sense of absurdity and humor ... Shteyngart uses a 19th-century-style omniscience, moving from mind to mind within a scene (and, like Tolstoy, even occasionally inhabiting the minds of animals) while drawing back and commenting to the reader from a perspective that none of the characters are privy to. This choice seems suited to the subject: We were all thrust into a vast calamity that we didn’t understand and over which we had no control. The world feels relentlessly godless. Our all-knowing narrator steps in to give us the big picture in inimitable Shteyngartian style ... This narration also allows the novel to adopt a tone of wry self-reflexivity, as in this slap at the very idea of writing a pandemic novel ... There are wonderfully vivid descriptions of food and weather and sex ... In this dense, ambitious novel, some elements fall flat. The speculative tech of the Tröö Emotions app seems to belong in a different book (although those umlauts are funny), and the more the characters tried to explain it, the less sense it made to me. And I didn’t need Sasha’s ongoing betrayal of one of his closest friends. I appreciate that Shteyngart wants to be unflinching about Sasha’s failings, but it struck me as too cruel for his character ... The novel’s strengths abound. It upends clichés, pieties and commonplaces while also noticing salient details of the lockdown ... It works because the author is aware of his characters’ hypocrisies and vanities. Shteyngart doesn’t let them off the hook, but he does allow them (and us) some respite.
Read Full Review >>
Rave Molly Young,
The New York Times
Chekhov’s stories 'have an atmosphere as distinct as an odor,' as the translator Avrahm Yarmolinsky put it, and the same is true of the work of Gary Shteyngart, a writer comparably superb at demonstrating absurdity and generating pathos. In Shteyngart’s case I would characterize the signature odor as tangy, briny and instantly appetizing. His books should come with a free bag of salt and vinegar potato chips ... Our Country Friends, the author’s fifth novel, is his finest ... brilliant about so much: the humiliations of parenting and of being parented; the sadism of chronic illness; the glory of friendship. It is also the first novel I’ve read that grapples with 'cancel culture' in a way that didn’t make me want to chop my head off, light it on fire and shoot it into space ... Like Chekhov, whose ghost floats pleasantly through these pages, Shteyngart is a master of verbs ... To read this novel is to tally a high school yearbook’s worth of superlatives for Shteyngart: funniest, noisiest, sweetest, most entertaining. To those I will add a few superlatives that were not celebrated at my own high school: most melancholic, most quizzical, most skilled at vibrating the deepest strings of the anthropoid heart ... a perfect novel for these times and all times, the single textual artifact from the pandemic era I would place in a time capsule as a representation of all that is good and true and beautiful about literature. I hope the extraterrestrials who exhume it will agree.
Read Full Review >>
Rave Claire Lowdon,
The Sunday Times (UK)
Gary Shteyngart’s fifth novel is so steeped in the present moment that we’re unlikely to be reading it in ten years’ time, let alone 100. Which is all the more reason to read it now. It’s not the first pandemic novel, but I will eat my facemask if anyone comes up with something quite as fun as this. So take a seat and prepare to be entertained ... ull-blown omniscience is rare in contemporary fiction. So it’s a true pleasure to sink into Shteyngart’s expansive, benevolent storytelling — hopping between his characters, dashing back and forwards in time, commenting on the world at large, revelling in the mechanics of his craft ... At 317 pages the scale is not Tolstoyan, and Shteyngart does struggle to fit so much story into his medium-sized novel. The deliciously convoluted plot proceeds in fits and starts. At times we’re shunted from twist to turn a little too abruptly; significant action happens off stage, and we learn about it in hasty recap. Some sentences, too, are overstuffed ... Yet what a lot he does fit in ... captures a time not so very long ago that already feels far away — a time before vaccines or variants, a time when we doubted the efficacy of masks and frantically wiped down surfaces and supermarket vegetables. And he has captured it beautifully: that sun-soaked nervous energy, the intense, almost maniacal aliveness of the early days of the pandemic. A fever dream that’s already fading. But then that’s exactly the point this flamboyant, theatrical, tragicomic book is making. Everything passes. We are such stuff as dreams are made on, and our little life is rounded with a sleep.
Read Full Review >>
See All Reviews >>
SIMILAR BOOKS
Fiction

Pure Colour
Sheila Heti
Positive
What did you think of Our Country Friends?
© LitHub | Privacy