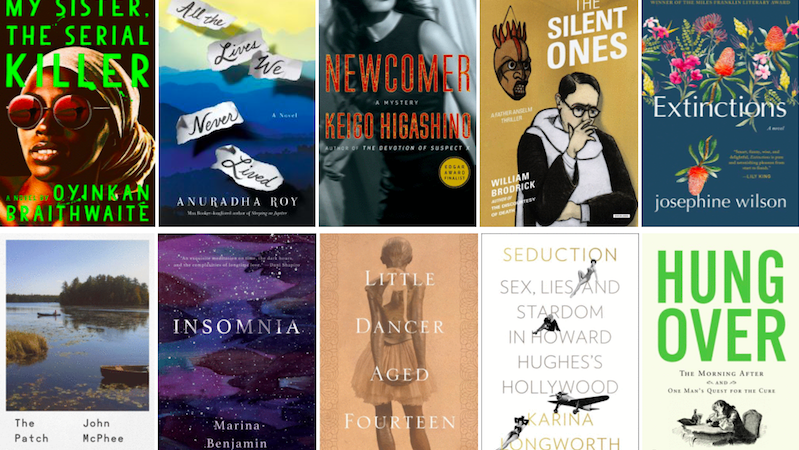 Featuring a murderous sibling, a guide to insomnia, a quest for the Hangover cure, and more

1. My Sister the Serial Killer by Oyinkan Braithwaite 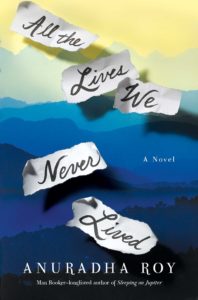 2. All the Lives We Never Lived by Anuradha Roy

“…Anuradha is a writer of great subtlety and intelligence, who understands that emotional power comes from the steady accretion of detail … All the Lives We Never Lived is set largely in the early part of the 20th century, with some sections in the 1990s. It does not directly refer to #MeToo or the macho hyper-nationalism of today’s India. But in its portrayal of power structures, it is part of those very contemporary political conversations. It is also a beautifully written and compelling story of how families fall apart and of what remains in the aftermath.”

“Unorthodox Tokyo detective Kyoichiro Kaga has been reassigned to the Nihonbashi precinct and is still acquainting himself with the quaint premodern neighborhood when another newcomer, Mineko Mitsui, is found strangled in her apartment. The savvy killer has left no trace of himself, leaving Kaga and the lead detective, Uesugi, to mine clues from the inconsistencies of Mineko’s last day … Kaga’s second investigation is a cerebral puzzler’s delight that…offers a thought-provoking take on the tension between modernity and traditional culture and leaves a trail of mended relationships in its wake.”

Read an excerpt from Newcomer here

4. The Silent Ones by William Brodrick

“The Silent Ones a superior work with interlocking elements of courtroom drama, psychological study and corruption exposé, might best be called a moral thriller … an unpredictable work, by turns shocking, poignant, enlightening and inspired.”

“All may be allegory, but Extinctions gets its hands dirty with a real plot and realistic characters … takes a hard look at the politics of adoption, cultural appropriation, loss, deracination, and professional frustration, without Wilson letting up her fictional grip … [Wilson] writes with great intention, calling upon us as individuals and as a society to change.”

Read an excerpt from Extinctions here

1. The Patch by John McPhee

“Finely curated, as expected for an essayist who lives and breathes structure … McPhee flawlessly moves from gravity to levity … Such pieces are tastes of his willingness to let the world around him just be and to marvel at mysteries of all variety … One wishes John McPhee would write about everything, his words an introduction to all of life’s flavors.”

Read an excerpt from The Patch here

“Marina Benjamin, a memoirist and an editor at Aeon magazine, has produced an insomniac’s ideal sleep aid—and that’s a compliment … For sleepless readers familiar with the feeling of being trapped in anxious ruts, Benjamin’s celebration of mind wandering as ‘fleet and light and connective’ may at times sound strained. But if her roaming induces fatigue now and then, her ‘border-crossing bravery’ and curiosity prove highly contagious. Either way, her slim book is what the doctor ordered.”

Read an excerpt from Insomnia here

“She has not solved a mystery (even if she turns up some interesting tidbits from various archives), but Laurens has done something more challenging: she’s captured what it feels like to think. Her enthusiasm, the million little connections that she makes between the dancer, the artist, and her own life, subsume the reader … Unanswered are the questions of what art is for, who Marie was, and even whether or not Laurens likes Degas. I take this as a measure of her success as a critic. Some questions can’t be answered, but that doesn’t mean they shouldn’t be asked.”

“While fascinating in its past particulars, Seduction is also a very timely book. In recent years the entertainment industry has been rocked by scandal, the #MeToo movement shattering the code of silence around the still-existing ‘casting couch’ … The book is a compulsive page-turner, written with a wisecracking style that also manages to be serious and thoughtful.”

5. Hungover: The Morning After and One Man’s Quest for the Cure by Shaughnessy Bishop-Stall

“The Canadian writer and actor Shaughnessy Bishop-Stall is a fine person to write a book about hangovers, not only because he’s a tenacious researcher but also because he’s willing to get thoroughly torn up on a consistent basis in colorful circumstances … Reading Hungover has an effect not unlike recovering from food poisoning or slipping into a warm house on a frigid night. You turn the pages thinking, ‘Thank God I don’t feel like that right now.’ Or maybe, ‘Thank God I’m not this guy’ … Bishop-Stall’s archival rooting-around is more interesting than his memoir through-line. Although he’s a lovable narrator, he’s also a pretty normal one, and his activities—planning a bachelor party, eating cheese, cat-sitting for his parents—don’t always rise to the level of book material. But that’s O.K. You expect a book about alcohol to ramble a little, and his commitment to the subject more than compensates.”

Read an excerpt from Hungover here