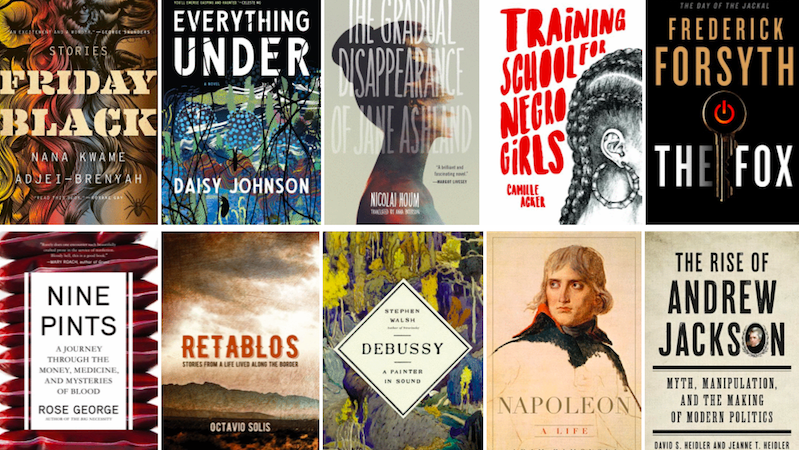 2. Everything Under by Daisy Johnson

“…[an] entrancing debut novel … Johnson’s waterways—muddy, unpredictable, treacherous, full of half-submerged souvenirs and elusive creatures—evoke the fluidity of memory, as well as of language, gender, and sexuality … Johnson’s own writing summons the just-off-ness of the uncanny; she is capable of passages of exquisite creepiness, a mood partially achieved via slight syntactical perturbations … Her sentences have an aqueous quality, an undertow that drags you on and down.”

Read an excerpt from Everything Under here

3. The Gradual Disappearance of Jane Ashland by Nicolai Houm, Trans. by Anne Patterson

“The title of this slim book sounds like a virtuosic magic act, and the Norwegian writer Nicolai Houm delivers. In the first of his three novels to appear in English, his legerdemain is remarkable. He builds suspense even as he splinters his plot into nonlinear fragments. He conjures up the emotional arc of a female life—from childhood loneliness through intense love to midlife derailment—in just 226 undersized pages. Most unexpected of all, he deepens a tale of grief with a caustic comic tone … In brief yet riveting scenes from the near and distant past, Houm lets readers piece together why Ashland has abandoned fiction and traveled to Norway, and how she ends up in the wild with a 40-something scientist … Casting an unlikely spell, Houm conveys not just the tenacity but the tragedy of that longing.”

4. The Fox by Frederick Forsyth

“Outstanding … Frederick Forsyth does it again. For a story like this to work, the details have to be on point, and it’s clear that the author has done his homework as he breaks down how hackers work, often detailing their various methods and the different virtual traps they can set … just the kind of stunning, relevant, full-throttle story that thriller fans have been waiting for, and nobody delivers quite like Frederick Forsyth, one of the very best writers the genre has ever known.”

Read an excerpt from The Fox here

“With this impressive debut short story collection, author Camille Acker establishes herself as a gifted and agile writer with an assured and masterful voice. The collection is centered around the lives of ordinary residents of Washington, D.C., over the past several decades. From a young girl in the ’90s who is losing her older brother to forces that she doesn’t understand, to a motivational speaker’s spouse in the midst of a serious marriage crisis, Acker’s protagonists are modern African-American women and girls from a range of class backgrounds … Acker is a sensitive and skilled writer whose relatable slice-of-life fiction feels firmly grounded in reality. Her pacing and ear for dialogue are impeccable.”

Read an excerpt from Training School for Negro Girls here

1. Nine Pints: A Journey Through the Money, Medicine, and Mysteries of Blood by Rose George

“George’s journalistic eye is combined with sharp moral judgment …[George] is painfully aware of the price of ignorance about blood, especially women’s blood … She is furious about the UK’s infected blood scandal, in which products from paid donors led to recipients contracting HIV/Aids and hepatitis C in the 1970s and 80s. It is impossible to read this chapter without becoming furious, too … What we know about blood is still so limited. ‘Blood is not done teaching us what it can do. More wonders will come,’ George says. This absorbing, vital book by one of the best non-fiction writers working today is a wonder in its own right.”

2. Debussy: A Painter in Sound by Stephen Walsh

“Squarely oriented on the music … Walsh’s primary focus on the music means the biography is at times light on anecdote and psychological analysis, but it’s a fair trade-off. Walsh’s narrative, without neglecting how Debussy’s art chimes with its historical contemporaries is a bravura account of how the force of genius can in any age create the new and unforeseen.”

3. Retablos: Stories From a Life Lived Along the Border by Octavio Solis

“…A self-described ‘anchor baby,’ Solis shares his memories as a brown person on the border with a keen eye and an agile way with words, endowing these snapshots from his childhood in El Paso with the visceral gut punch of Mexican retablos​, devotional paintings in vivid colors on metal or wood. Solis hones each scene with striking…imagery: his grandmother Mama Concha with her rollers, red lipstick, sagging hose, and purse ‘fragrant with Wrigley’s Chewing Gum’; the ghostly figure of a runner who threads his way through the book, aging as Solis ages, advancing under Solis’ curious gaze, then vanishing into a misty distance. In all, an evocative, and timely expression of border culture for every library collection.”

Read an excerpt from Retablos here

4. Napoleon: A Life by Adam Zamoyski

“Zamoyski deserves praise for his selection of sources. Unlike some recent works that rely on the accounts of contemporaries who abhorred Napoleon, Napoleon: A Life incorporates the voices of those who were both for and against him, and, even more important, those who were observers and not politically polarized … Although his book fills more than 700 pages, it moves quickly, and Zamoyski adeptly avoids getting bogged down in any specific topic … one of the finest biographies of Napoleon Bonaparte ever written.”

5. The Rise of Andrew Jackson by David S. Heidler and Jeanne T. Heidler

“In The Rise of Andrew Jackson, David S. Heidler and Jeanne T. Heidler essentially take the Rogin view. The Heidlers, who in 2010 published a sensitive and luminous biography of Jackson’s great rival Henry Clay, here trace Jackson’s life through his 1828 presidential election, when he won his first presidential term … The Heidlers are fine historians; their Clay biography is rich in detail and literarily vibrant. Clearly in the epic political struggle between Clay and Jackson, Clay is their man. They have rendered here a picture of Jackson that seems pretty close to what that great Kentuckian would have written back in the day.”