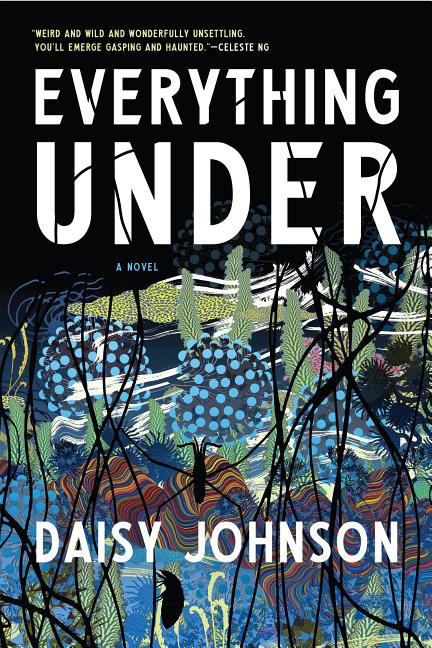 Shortlisted for the 2018 Man Booker Prize, a reimagining of the Oedipus myth set on the canals of Oxford.

What The Reviewers Say
Rave Ann Hulbert,
The Atlantic
Daisy Johnson...pulls off several marvels at once in Everything Under (her debut novel, no less). She coins words, channels outlier voices, and fractures chronology. The result is an uncanny update of ancient storytelling on a primal theme: Are our fates 'coded into us from the moment we are born'? ... Is escape possible? The question keeps breaking the surface of these mesmerizing pages. Steeped in the Oedipus myth and dark fairy-tale enchantment, Johnson’s world is also indelibly her own.
Read Full Review >>
Rave Katy Waldman,
The New Yorker
...[an] entrancing debut novel ... Johnson’s waterways—muddy, unpredictable, treacherous, full of half-submerged souvenirs and elusive creatures—evoke the fluidity of memory, as well as of language, gender, and sexuality ... Johnson’s own writing summons the just-off-ness of the uncanny; she is capable of passages of exquisite creepiness, a mood partially achieved via slight syntactical perturbations ... Her sentences have an aqueous quality, an undertow that drags you on and down.
Read Full Review >>
Positive John Freeman,
The Boston Globe
So skillful and imaginative is [Johnson’s] tale of time and fate that it earned her the distinction of being named the youngest Man Booker Prize finalist ... Sometimes it’s hard not to wish sometimes Johnson had let metaphor do its own patient work ... For every section that feels overly serpentine, however, there are several so neatly dammed they feel as contained and beautiful as prose poems ... It takes a bold mind to steer so many elements through one tale, and an even stronger stylist to render them in a narrative that heeds, but seems not to, the laws of nature. Johnson has done all this in a book that will probably be read, like Ali Smith’s How to Be Both, for years to come as a part of the reclaiming of narrative territory...
Read Full Review >>
See All Reviews >>
SIMILAR BOOKS
Fantasy

Win Me Something
Kyle Lucia Wu
Rave
What did you think of Everything Under?
© LitHub | Privacy