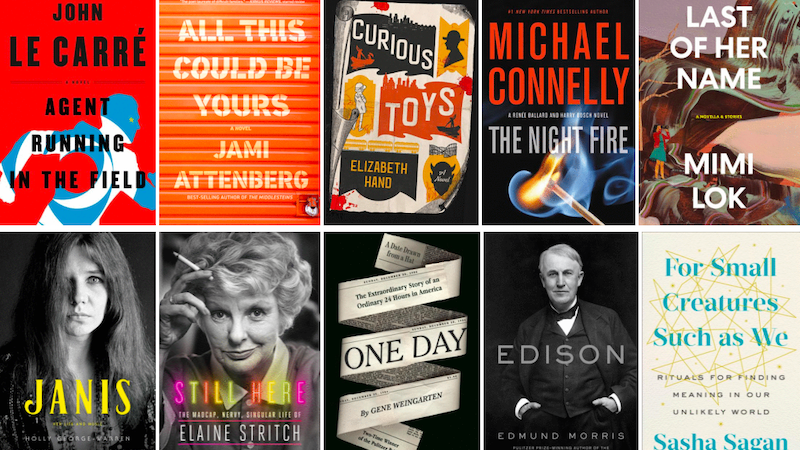 John le Carré’s Agent Running in the Field, Jami Attenberg’s All This Could Be Yours, Michael Connelly’s The Night Fire, and Holly George-Warren’s Janis: Her Life and Music are among the most critically-acclaimed books of the past seven days.

1. Agent Running in the Field by John le Carré

“John le Carré’s 25th novel is so topical it arrives with the beeping urgency of a news alert … Trump himself has no speaking part in this dark, sometimes serio-comic, take on Russia’s malevolent role in the turmoil besetting Western democracies. But his name is often mentioned, and his face seems to press against the window of the novel like some creepy orange Halloween mask … As usual, the characters le Carré respects…are lovingly examined in all their complexities, while his villains are just as lovingly eviscerated.”

2. All This Could Be Yours by Jami Attenberg

“Attenberg’s seventh work of fiction is experienced mostly through Alex, Barbra, and Twyla, each one a terrifically nuanced character that’s nearly impenetrable to the others yet intoxicatingly available to readers. As the story unfolds largely over a single day, memories are purged and bombshells dropped, not to mention the ever-curious matter of the vexing central character rendered mute for the duration. Attenberg writes with a deeply human understanding of her characters, and the fact that, when it comes to family, things are rarely well enough to leave alone.”

“… [a] brilliant, bustling historical mystery … while Hand paces her mystery with classic precision, the real reward of Curious Toys lies in its richly textured panorama of Chicago during a crucial period of change, and in its vivid characters. Riverview, of course, is legendary among older Chicagoans, and Hand presents it not as a generic carnival-murder setting, but as a kind of distorting mirror of cultural anxieties, many of which are still with us today.”

4. The Night Fire by Michael Connelly

“Master storyteller Connelly manages to top himself with his latest intensely gripping thriller … He tells a superb tale with an economy of words using a no-nonsense, fly-on-the-wall style of writing. Keeping the chapters short and the Bosch and Ballard sections separate brilliantly aids in the thought process continuity that readers will find necessary for this mystery containing many irons in the fire, a few holy cows, and edge-of-your-seat chills … Fans of this prolific author of crime dramas and either series will find this best-seller-list-bound novel hard to put down. Though it reads well as a stand-alone, this series is best read in order.”

5. Last of Her Name by Mimi Lok

“… a beautiful and perceptive look at the connections we make—and fail to make—with family, friends and strangers. Lok’s literary debut is among the strongest of the year, thanks to her excellent writing and uncanny ability to create complex characters with the same stubborn flaws as real people … doesn’t feel at all like a debut book; Lok writes with the self-assuredness of a literary veteran and the insight of someone who’s spent a lifetime studying how humans interact. It’s a gorgeous collection that urges us to do our best to connect with one another—the alternative, as some of Lok’s more unfortunate characters demonstrate, is oblivion.”

1. Janis: Her Life and Music by Holly George-Warren

“A richly detailed, affectionate portrait … illuminating … George-Warren gives her subject a sensitive yet honest treatment, showing all dimensions of Joplin’s life without minimizing her self-destructive side. Filled with evocations of the San Francisco music scene at its height, the narrative will give readers new appreciation for Joplin … A top-notch biography of one of the greatest performers to emerge from a brilliant era.”

Read an excerpt from Janis: Her Life and Music here

“… so engrossing an exploration of its subject that to call it a ‘biography’ feels somehow inadequate … a meticulously researched romp, a harrowing excavation, an emotional séance, and a glittering family reunion, with the author playing game outsider at the gathering, enthusiastic to find out everything she can … Jacobs’s rigorous fact-checking of Elaine’s tales (some taller than others) is masterful. The way she incorporates her interview subjects’ contrasting versions of events never undermines the satisfaction of the anecdotes, but rather fleshes them out and encourages us to think about why the storytelling might have been fudged … Jacobs deftly weaves Stritch’s yearning for validation into the fabric of the book, so that to us, her increased earnestness and emotional availability to the public seem foregone conclusions.”

3. One Day: The Extraordinary Story of an Ordinary 24 Hours in America by Gene Weingarten

“…a helluva good look at The Human Experience … His stories are by turns sweet, rueful, horrifying and impossibly serendipitous … There’s no real theme tying his stories together; the book reads like one of those compilations popular with journalists in the pre-Internet era, with titles like The Best Newswriting of 1986. But those books were good reads, and this one is, too. You’ll find it a collection of ripping yarns. That they don’t knit together into a whole doesn’t lessen the enjoyment of reading a master storyteller.”

“Few biographers…possess the narrative talents of Edmund Morris. His ability to set a scene, the words aligned in sweet rhythmic cadence, is damn near intoxicating … For all his quirks, Morris reminds us, Edison never lost sight of the future. And that, perhaps, is the key takeaway from this elegant, loosely crafted, idiosyncratic book. No inventor did more to nudge the world toward modernity, and few had a better feel for what the next generation of inventors might pursue.”

5. For Small Creatures Such as We: Rituals for Finding Meaning in Our Unlikely World by Sasha Sagan

“From birthdays to funerals to the changing of the seasons to lunar cycles, [Sagan] thoughtfully explores how to blend science and spirituality. An eye-opening book for those who might question traditional religious celebrations but feel connected to the community, rituals, and comforts they provide, this is a refreshing, intelligent examination of faith, religion, and the many wonders of science worthy of celebration.”

Read an excerpt from For Small Creatures Such as We here