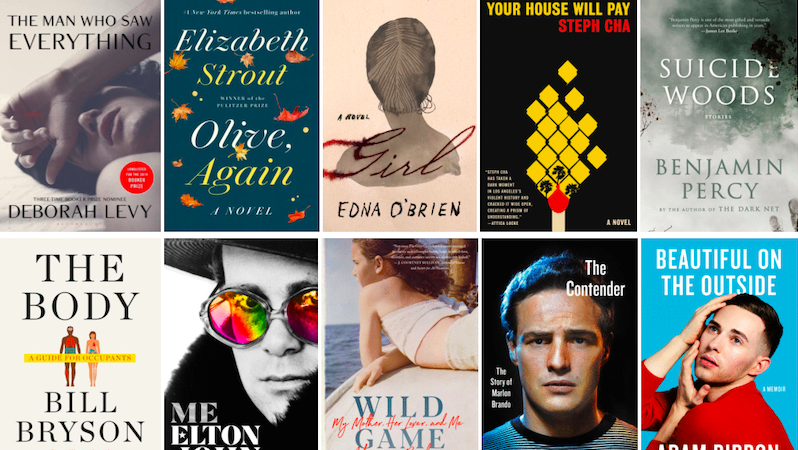 Deborah Levy’s The Man Who Saw Everything, Elizabeth Strout’s Olive Again, Edna O’Brien’s Girl, Bill Bryson’s The Body, and Elton John’s Me are among the most critically-acclaimed books of the past seven days.

1. The Man Who Saw Everything by Deborah Levy

“[a] brave, terse, dense, plangent, unsettling novel … The Man Who Saw Everything, though not obviously avant-garde, takes an unorthodox approach to plot, setting, the portrayal of consciousness and the wielding of ideas … Levy’s project as a writer is itself about effacing borders – between the novel of ideas and the novel of sentiment, be-tween the schematic and the fluent, the inevitable and the accidental, the cerebral and immersive, the sensuous (or somatic) and cerebral, the parochial and otherworldly, metaphor and literalism … by refusing ever to make the significance of the story neat or wholly legible, Levy has succeeded in evoking our ways of engaging as they are experienced, as a kind of groping, with patterns only appearing to form, a final sense touched but never grasped. You would call her example inspiring if it weren’t clearly impossible to emulate.”

“Syllable for syllable, it’s stunning work—arguably better than the original … these stories create a world almost unbearably addictive for its beautiful, agonized truths … wave upon wave of unflinching insight, delivered in language so clean it shines. Sentences flow in simplest words and clearest order—yet line after line hammers home some of the most complex human rawness you’ll ever read … Strout dwells with uncanny immediacy inside the minds and hearts of a dazzling range of ages … Olive, Againtranscends and triumphs. The naked pain, dignity, wit and courage these stories consistently embody fill us with a steady, wrought comfort.”

“O’Brien has no intention of letting the reader look away, even for a second … a stunning novel that forces us to confront one of the more shocking events of recent years. It’s a painful read, but an absolutely essential one … The book ends on a note that’s hopeful, but realistic—O’Brien doesn’t condemn her character to despair, nor does she seek to downplay the enormity of the brutality she’s survived …  O’Brien refuses to shy away from the horrors that the Nigerian schoolgirls went through, but she also declines to give in to pessimism … a perfect, and devastating, description of the persistence of trauma, its insistence on filling the space available to it—and Girl is a stunning novel, another remarkable achievement from one of the English language’s greatest living writers.”

Read an essay on the oeuvre of Edna O’Brien here

4. Your House Will Pay by Steph Cha

“To read Steph Cha’s compelling and risk-taking new novel is to be submerged in tragedy and to appreciate the herculean effort needed to pull back from the brink of spiraling disaster … Shawn is my favorite character, but there are many complex and well-rendered African Americans in the novel … Cha uses an intimate third-person voice throughout the novel, and with half the book being about Black folk, I was surprised that she would attempt something so audacious and weirdly fearless … Cha is striving for that and is willing to take great risks to achieve it, and she is largely successful … That Cha is drawn to contend with voices that don’t strictly represent her cultural heritage, while taking head-on one of the most devastating events in Los Angeles history, is admirable as well as ambitious … Cha is a remarkably generous writer. Through understanding and empathy, she reveals how difficult it can be to reconcile—yet sometimes, somehow we do.”

“Each mesmerizing story in Benjamin Percy’s latest collection is rooted in the uncanny, where the familiar is freaky and the impossible ‘a white smear rising out of the darkness.’ But even in Percy’s eeriest tales, compassion and wry humor infuse the narratives. Suicide Woods is more Stranger Things than Twilight Zone, closer to King than Kafka, and it’s as entertaining as whatever chilling show you’re bingeing on Netflix right now … In each one of Percy’s stories, the settings are alive … You’ve been warned.”

1. The Body: A Guide for Occupants by Bill Bryson

“Mr. Bryson’s latest book is a Baedeker of the human body, a fact-studded survey of our physiques, inside and out. Many authors have produced such guides in recent years, and some of them are very good. But none have done it quite so well as Mr. Bryson, who writes better, is more amusing and has greater mastery of his material than anyone else … Mr. Bryson is a master explainer, with a gift for the pithy simile and all-encompassing metaphor … Mr. Bryson’s love of language is often on display, and he can’t resist occasional indulgences on the origins of terms medical and anatomical … Mr. Bryson’s account is enlivened by his excellent command of the history of medicine … Mr. Bryson is brisk, provocative and entertaining throughout.”

Read an excerpt from The Body here

“…a hairplugs-and-all memoir that pushes the envelope for aging rock star candor … If John had no material other than the job his foul-tempered parents did on him, he’d still have a riveting story to tell. But Me is a very crowded book by a man who’s kept a lot to himself until now. Earlier this year the movie Rocketman gave a reasonably accurate overview of the Elton John story—but it barely scratched the surface of what’s in this memoir. The lurid parts will get all the headlines. But the man’s hard-won self-knowledge is what the book’s really about … carefully apolitical about anything but L.G.B.T.Q. issues … Aficionados of rock star memoirs, take note: This one also gets into John’s bout of prostate cancer, complete with his surgery and use of adult diapers. The latter may be a first in the genre … Even the worst of it can be ghoulishly funny … the voice here sounds just right, even if it has been unfamiliar until now. It’s a gift to finally hear from someone who has delivered so many of Taupin’s words and so few of his own.”

3. Wild Game: My Mother, Her Lover, and Me by Adrienne Brodeur

“… manages to be both elegant and trashy at the same time, elevating 40-year-old gossip to an art form. To situate her on the ‘Mommie Dearest’ scale, Brodeur combines the you’re-not-gonna-believe-this outrage of a Sean Wilsey with the high-test filial devotion of a Mary Karr … Self-dramatizing tendencies may have been a problem for Malabar, but they work beautifully in Brodeur’s memoir, making a glittering, insightful page-turner of the worst-case scenario of mother-daughter boundary issues.”

4. The Contender: The Story of Marlon Brando by William J. Mann

“… deeply engaging and perceptive from page one. Neither hagiography nor scandal sheet, it’s a clear reckoning of a complex man. The author explores the films, of course, but mostly Brando himself … The curious twist, and possibly the most compelling aspect, is Mann’s decision to conclude with a quiet moment in 1974—leaving the final 25 years of Brando’s life for a brief epilog. The madness of Apocalypse Now, his sporadic retirement, and his increasingly public family issues are thus given the briefest of consideration. While the narrative is bookended by descriptions of son Christian Brando’s 1991 trial for manslaughter, Mann has crafted a fitting end to the story he wanted to tell, and this account may be the richer for it … A thoroughly enjoyable, illuminating read, and a must for all libraries.”

Read an excerpt from The Contender here

4. Beautiful on the Outside by Adam Rippon

“Rippon reminds us that gay doesn’t just mean homosexual, but it can also mean cheerful, light-hearted, playful, and exuberant … Rippon is such a gifted and vibrant raconteur that he’s continually cracking jokes … Of course, being a good storyteller is not quite the same thing as being a good writer, and one wishes that Rippon’s editor had paid more attention to grammar. In particular, verbs tend to float between tenses for no discernible reason. Still, Rippon’s style is so vibrant and conversational that few people other than English teachers are going to notice, let alone be distracted … The real value in Rippon’s book lies in his descriptions of how he trained and how he crafted his career. Beautiful on the Outside is a fascinating study in motivation, concentration, and discipline, and one that has lessons for anyone in pursuit of excellence. The fact that it is so full of laughs only makes it that much better.”