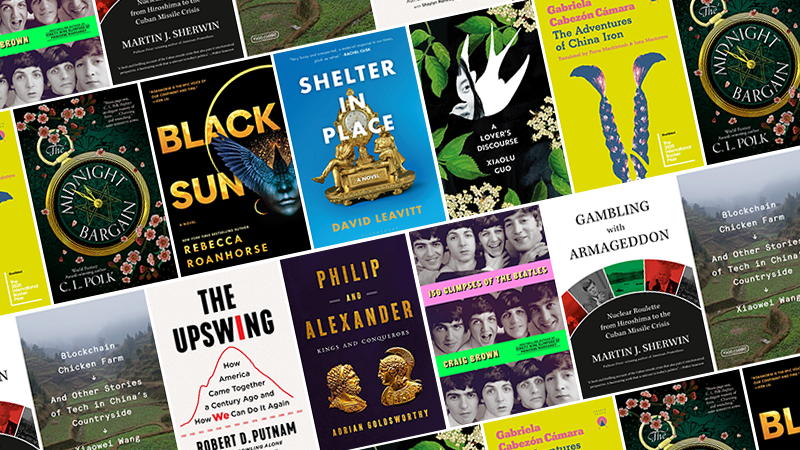 Xiaolu Guo’s A Lover’s Discourse, Rebecca Roanhorse’s Black Sun, David Leavitt’s Shelter in Place, and Craig Brown’s 150 Glimpses of the Beatles all feature among the best reviewed books of the week.

“Guo is an unsparing noticer. She paints a vivid but unflattering portrait of her new dwelling in her adopted country … The truthfulness and accuracy of Guo’s language gives the book mischief and energy. There are shades of Lydia Davis in her carefully etched sentences as she details the ups and downs of the relationship without sentimentality … What propels the book forward is in part the sense of suspense that hangs over the nascent relationship: Has our heroine made an enormous mistake getting together with an itchy-footed boat lover? But there’s also something compelling about the breadth of the world the narrator inhabits. The book moves briskly from the canals of North London to Scotland, Australia, Germany and China. Along the way, it’s capacious enough to touch on moments of real darkness, while somehow managing to be mordant, funny and, ultimately, life-affirming … Guo gives her characters scope to live and suffer, so her book’s final affirmation has a hard-won quality that carries weight.”

“The Adventures of China Iron begins with a moment of lyricism that isn’t any less powerful for being directed at a dog … China Iron showcases a remarkably fresh vision of life on the 19th-century pampas … It’s easy to categorize China Iron at first as magical realism, but it’s something else entirely, a historical novel that reminds us, in Cabezón Cámara’s entrancing poetry, how magical and frankly unpleasant it is to live through history … a masterly subversion of Argentine national identity … The translation by Iona Macintyre and Fiona Mackintosh is sure-footed, Cabezón Cámara’s lush prose spilling out without hesitation.”

“I love novels of magical manners, stories that contrast the rigid specificities of humdrum moneyed lives with the numinous wilderland of magic. Polk’s contribution to the genre is smooth and confident, with prose that reads like running a hand over velvet. She uses historical fantasy not to simply dismiss outdated mores on sexuality and desire but to engage with the contemporary issues of birth control and parental leave, which remain frustratingly controversial in much of the world. A sleek, beautiful book with a quietly serious heart.”

“Rebecca Roanhorse captivates once again … Roanhorse creates a unique mythology and builds a world at once recognizable and new, a breath of fresh air for all fantasy lovers, especially those who recognize that not all fantasy worlds are rooted in European-esque landscapes and harken back to the Celts … Black Sun thrives with magic and culture that harkens back to great empires such as the Aztec and Mayan. I can see the red rock walls of my own beloved home of New Mexico … I welcome Black Sun with open arms, as I hope you do, as well.”

“Shelter in Place is the novel John Updike would have written about the 2016 presidential election … As Bruce and Eva’s relationship begins to change, the echoes of Updike, a master at mining the mundane, are loudest. Like Updike, Leavitt injects a welcome degree of humor and diversion into the proceedings via a supporting cast of clever friends … a brilliant fiction, but the world he portrays is all too real.”

1. 150 Glimpses of the Beatles by Craig Brown
(Farrar, Straus and Giroux)

“Time-play and what-ifs are part of Brown’s formidable bag of tricks, deployed to add emotional range and a poignant twist to his comic vignettes. His biographical method—combining fragments, lists, excerpts, quotes and flights of whimsy—is executed as brilliantly here as in 2017’s glittering Ninety-Nine Glimpses of Princess Margaret … Brown’s book is an idiosyncratic cocktail of oral history, personal memoir, tourism and biography … [a] riotous, hilarious book, which achieves depth through Brown’s strong feeling for both the quiet and the noisy devastations wrought by ambition, fame, personal tragedy and time.”

“Sherwin’s detailed, opinionated scholarship makes it clear how national leaders bumbled through the crisis, avoiding nuclear Armageddon through modest amounts of wisdom mixed with plenty of machismo, delusions, and serendipity. Future crises are inevitable, and the author clearly demonstrates how there are no guarantees they will turn out so well … A fearfully convincing case that avoiding nuclear war ‘is contingent on the world’s dwindling reservoir of good luck.’ ”

“The combination of the surreal, faintly humorous and possibly momentous typifies this eminently readable foray into some of the farther reaches of technology’s tentacles … significantly, Blockchain Chicken Farm isn’t really a ‘China book’ at all: Wang is peering into the future of tech and society and finds—convincingly—the most important signposts in China rather the United States … a fascinating (and fun) discussion of how technology development plays out differently in China, but more importantly, it provides a mirror, largely unfogged by priors, of how the push and pull between technology and society may well play out not just in China but possibly everywhere else.”

4. The Upswing: How America Came Together a Century Ago and How We Can Do It Again by Robert D. Putnam and Shaylyn Romney Garrett
(Simon & Schuster)

“…serves as a call to the generations who have succeeded the baby-boomers to imagine a better future for the American project, and to pursue it. Rather than focusing on the tension between generations the authors encourage young people to look for an earlier precedent for themselves. They remind us that the problems of today with which the new generations must grapple—the skyrocketing costs of health care, the weakness of environmental regulations, the power of corporate monopolies, and the urgent need for campaign finance reform—are almost exactly the same as those that confronted the original Progressives in their day, even if the solutions to these problems must be new and different ones … magnificent and visionary.”

“Superb … Countless books have covered the lives of Alexander the Great and his energetic father, Philip of Macedon, but this dual biography, one of the first for a popular audience, not only gives them equal weight, but emphasizes that ‘both men were able, and Alexander won the war planned and prepared by Philip’ … Despite the plethora of accounts of Alexander’s campaign, readers will still enjoy this riveting one … An outstandingly fresh look at well-trodden ground.”