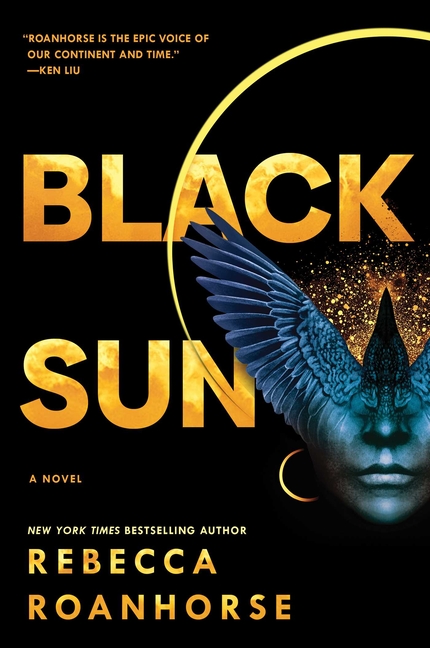 Black Sun is the first book in the Between Earth and Sky trilogy, inspired by the civilizations of the Pre-Columbian Americas and woven into a tale of celestial prophecies, political intrigue, and forbidden magic. In the holy city of Tova, the winter solstice is usually a time for celebration and renewal, but this year it coincides with a solar eclipse, a rare celestial event proscribed by the Sun Priest as an unbalancing of the world.

What The Reviewers Say
Rave Angela Maria Spring,
Tor.com
Rebecca Roanhorse captivates once again ... Roanhorse creates a unique mythology and builds a world at once recognizable and new, a breath of fresh air for all fantasy lovers, especially those who recognize that not all fantasy worlds are rooted in European-esque landscapes and harken back to the Celts ... Black Sun thrives with magic and culture that harkens back to great empires such as the Aztec and Mayan. I can see the red rock walls of my own beloved home of New Mexico ... I welcome Black Sun with open arms, as I hope you do, as well.
Read Full Review >>
Rave Maya Gittelman,
Bookreporter
... an immersive, innovative, unputdownable adventure. Epic in scope and intimate in its telling, this is a must-read for lovers of lush, literary fantasy ... This is one of my favorite fantasies of the year. Intricate and inspired by a rich history, it is also wholly original and rendered in such an accessible, compulsively readable way. Roanhorse’s writing is propulsive and lush, and makes the worldbuilding so inviting. Each main character is compelling in their own right, wrestling with moral ambiguity, the intricacies of their histories and the choices they have to make as the world shifts beneath their feet. This is an epic, brimming with far-reaching political intrigue, celestial prophecy and divine retribution made flesh, and its telling is strengthened for its root within these genuine, flawed, fascinating characters ... will certainly appeal to fans of George R. R. Martin, Andrzej Sapkowski and N. K. Jemisin, but it’s also inviting to new readers of fantasy, or those who can’t seem to get invested in a big, intimidating series. The narrative moves through time, but in a readably near-linear fashion, all building to the Convergence. Though it alternates between perspectives, there are only four, and each is clearly distinctive, the roles they have to play in each other’s stories coming to the fore early on. Lovers of the genre will revel in the beautifully crafted world, the morally complex character work, the compelling build of romance, the sharply wielded scenes of violence and of magic. And while I do love some popular, blockbuster fantasy adventure stories, I felt safe in Black Sun in ways that I rarely do in other works ... This is an Indigenous, pre-Columbian narrative, and I love how it considers power, politics and identity in a world untouched by Columbus’ imperialism. There are multiple queer and trans characters who get to live in a universe without the homophobia and transphobia that came along with colonization. One of the main characters is disabled, and though I can’t speak to the representation of blindness with any authority, my initial impression was that it reads better rendered than some other popular portrayals of disability in this genre. Roanhorse mentions in her ending notes that she has done her research. There is no sexual assault, unlike many popular epic fantasies, or gratuitous violence whatsoever --- just well-placed, well-wielded brutality that’s purposeful for the story, making it an all the more impactful and far less traumatizing read ... a vibrant, vicious novel. It sings off the page with adventure and destiny, prophecy and revolution. It was just the sort of inviting escape I needed. This is a stunner, and I eagerly anticipate the next novel in the series.
Read Full Review >>
Rave The Nerd Daily
Black Sun is an epic fantasy lover’s dream come true ... With a narrative so enchanting that putting down the book halfway through feels like the hardest thing ever, Black Sun was intense from the get-go; and through the entirety of the book, the pace never let up. Roanhorse’s prose is delightful and atmospheric ... If a historically and politically heavy epic fantasy sounds like your thing, I’ll urge you to pick Black Sun up.
Read Full Review >>
See All Reviews >>
SIMILAR BOOKS
Fantasy

The World We Make
N. K. Jemisin
Positive
What did you think of Black Sun?
© LitHub | Privacy