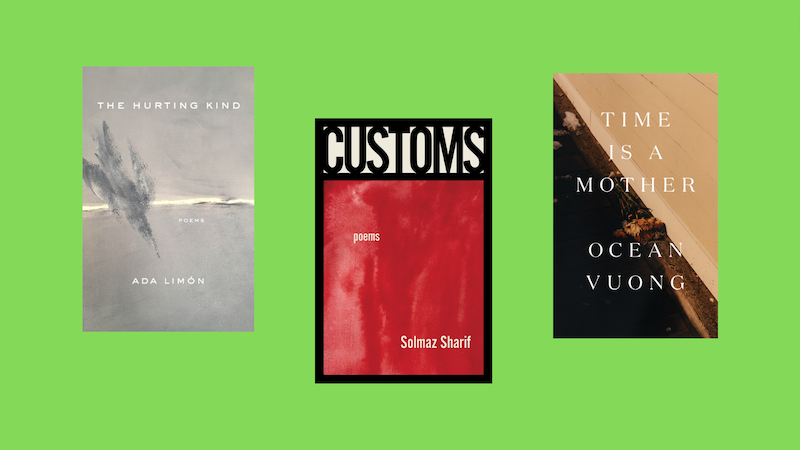 The Best Reviewed Books of 2022: Poetry

“Limón responds in her poetry to what she identifies as an ecological imperative to re-describe our relationship to ‘nature’ in a manner that isn’t merely instrumental. The moving personal dramas that her poems detail can never be separated from the landscape in which they occur … Her poetry, which can feel so intimate and self-revealing, is almost constantly political at the same time … What I might contribute, at the expense of seeming geeky, are some comments on the technical brilliance of Limón’s work, as it is seldom mentioned elsewhere … Most of the lexicon and sentence patterning throughout this poem— and Limón’s other poems— could easily be spoken in conversation. It’s characteristic of Limón’s style that her language reads as both speech and as heightened ‘non-speech.’ It’s a difficult balancing act … Limón isn’t a naive writer; her poetics are informed and slyly in conversation with a historical body of literature … The poems in all four sections of The Hurting Kind cultivate wisdom in domesticity … There are endless things to say about the articulate, complex emotional resonance of the poems in this book. Still, what Limón says about ‘a life’ is true as well for her book: ‘You can’t sum it up.'”

2. Time is a Mother by Ocean Vuong
(Penguin)

“Time, normally associated with death and erasure, embodied in the image of the Greek god Kronos devouring his young, is transformed by the poet into a mother with endlessly regenerative power … illustrates the poet’s efforts to reconcile inexorable fate with aesthetic transformation, eternal absence with continuous presence … Aesthetically complex yet emotionally accessible, Time is a Mother at once innovates and affirms the existing poetic tradition, bringing to mind John Ashbery’s Paradoxes and Oxymorons. Vuong’s portrait of Hồng is both intimate and iconic … By addressing Hồng in ‘Dear Rose,’ Vuong also reaches out to us who, in reading his work, become his mother, the poem, and his community through space and time.”

“… a dazzling collection … Through her poems, Sharif rebels against gatekeepers, memorializing small and large violations of the spirit and body. She skillfully employs syntax and placement to signify the outsider experience, and how many voices and narratives have been silenced. Her poems often exhibit a wide expanse of white space to frame powerful linguistic fragments, which are complete in their vivid imagery yet leave room for personal interpretation … Sharif uses language, often fragments with extended impact, to unveil the indescribable and to embody emotion that language can’t possibly express, but in such talented hands, somehow does … In some sections, Sharif beautifully creates blizzards of white space with words or couplets, interspersed like small people from a distance or footsteps of those who’ve come before. The reading process forces our electronically trained mind and visual cortexes to slow down and also physically presents the hesitations of searching for words that may not be found, in languages in which one may not be fluent. Sharif’s language is spare and all the more sharp for what remains, for all that she has left out, as the sculptor does with a slab of marble … This is poetry—this is a poet—that marvels us in manners minute and majestic. That will always be current, of its time, of our times.”

4. The Kissing of Kissing by Hannah Emerson
(Milkweed)

“Emerson, a non-speaking, autistic writer, communicates a sublime personal cosmology in poems vibrating with an energy that derives, in part, from surprising repetitions … Emerson’s work provokes ecological awareness through musings about animal consciousness, plant life, and the paradox of an individual psyche that might engage in an elemental dissolution into snow, sunlight, or mud … [an] unforgettable collection.”

“You might identify Brian Tierney’s masterful Rise and Float with the subject matter it delicately, woundedly, explores: the many strains of suffering brought together under the insufficient language of ‘mental illness,’ and the far-reaching webs of pain and memory they engender … But the book’s most distinctive feature is the experience of constant motion, as the poems enact a continuous search for religious consolation, which is sometimes called ‘meaning,’ and sometimes ‘metaphysics,’ a search pursued all the more sincerely because it is known to be foreclosed. That motion leaves its signature and its stage direction at every level, from the breaking of syntax across the fall of one line and its healing in the first word of the next … Though the little rifts in language that these poems make visible once may have opened toward consolation, the reader sensitized by this book’s scarred and cynic knowledge will come to feel them as lures for false feeling, requiring the repeated, painful sacrifice of consolation in the name of honesty. This is quite dark. As is the book. But even what doesn’t console may compensate, and if Rise and Float’s search for salvific meaning fails, the language, gorgeous in its precision, remains as its own testament of perseverance … This is a book that rises despite what it knows, celebrates the float of disbelief that poetic language allows, and mourns the precise place on the linoleum where those mirages fail.”