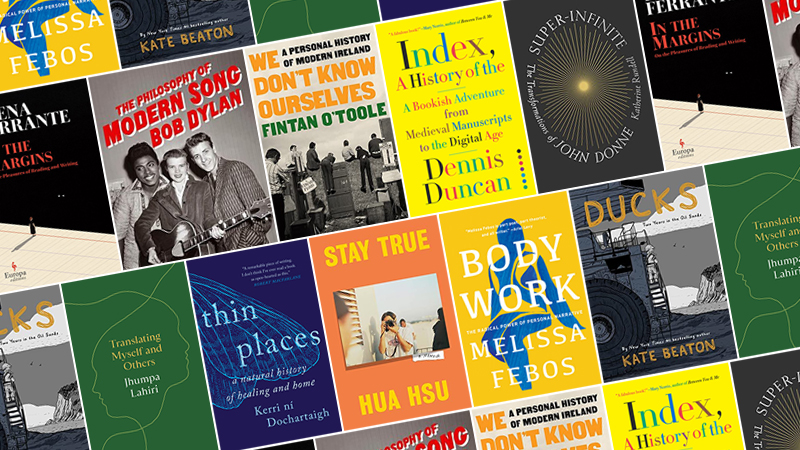 The Best Reviewed Books of 2022: Nonfiction

1. In the Margins: On the Pleasures of Reading and Writing by Elena Ferrante, trans. by Ann Goldstein
(Europa)

“The lucid, well-formed essays that make up In the Margins are written in an equally captivating voice … Although a slim collection, there is more than enough meat here to nourish both the common reader and the Ferrante aficionado … Every essay here is a blend of deep thought, rigorous analysis and graceful prose. We occasionally get the odd glimpse of the author…but mainly the focus is on the nuts and bolts of writing and Ferrante’s practice of her craft. The essays are at their most rewarding when Ferrante discusses the origins of her books, in particular the celebrated Neapolitan Novels, and the multifaceted heroines that power them … These essays might not bring us any closer to finding out who Ferrante really is. Instead, though, they provide valuable insight into how she developed as a writer and how she works her magic.”

2. Index, A History of the: A Bookish Adventure from Medieval Manuscripts to the Digital Age by Dennis Duncan
(W. W. Norton)

“The cleverly punctuated title of Dennis Duncan’s book, Index, A History of the, should signal that this isn’t a dry account of a small cogwheel in the publishing machine. Instead, it is an engaging tale of the long search for the quickest way to find what you need in those big, information-rich things called books. It is indeed an adventure, and ‘bookish’ in the most appealing sense … Duncan goes into fascinating detail about all this—page numbers get an entire chapter of their own—with digressions into curious byways of booklore and literature … From ancient Egypt to Silicon Valley, Duncan is an ideal tour guide: witty, engaging, knowledgeable and a fount of diverting anecdotes. The book skews toward the literary, but anyone interested in the 2,200-year journey to quickly find what one needs in a book will be enlightened, and will never again take an index for granted. The well-designed book also includes nearly 40 illustrations. As might be expected, the index—created not by the author but by Paula Clarke Bain—is magnificent.”

4. Super-Infinite: The Transformations of John Donne by Katherine Rundell
(Farrar, Straus and Giroux)

“Rundell is right that Donne…must never be forgotten, and she is the ideal person to evangelise him for our age. She shares his linguistic dexterity, his pleasure in what TS Eliot called ‘felt thought’, his ability to bestow physicality on the abstract … It’s a biography filled with gaps and Rundell brings a zest for imaginative speculation to these. We know so little about Donne’s wife, but Rundell brings her alive as never before … Rundell confronts the difficult issue of Donne’s misogyny head-on … This is a determinedly deft book, and I would have liked it to billow a little more, making room for more extensive readings of the poems and larger arguments about the Renaissance. But if there is an overarching argument, then it’s about Donne as an ‘infinity merchant’ … To read Donne is to grapple with a vision of the eternal that is startlingly reinvented in the here and now, and Rundell captures this vision alive in all its power, eloquence and strangeness”

6. Translating Myself and Others by Jhumpa Lahiri
(Princeton University Press)

8. The Philosophy of Modern Song by Bob Dylan
(Simon & Schuster)

“… quietly wrenching … To say that this book is about grief or coming-of-age doesn’t quite do it justice; nor is it mainly about being Asian American, even though there are glimmers of that too. Hsu captures the past by conveying both its mood and specificity … This is a memoir that gathers power through accretion—all those moments and gestures that constitute experience, the bits and pieces that coalesce into a life … Hsu is a subtle writer, not a showy one; the joy of Stay True sneaks up on you, and the wry jokes are threaded seamlessly throughout.”

“In her new book, Body Work: The Radical Power of Personal Narrative, memoirist Melissa Febos handily recuperates the art of writing the self from some of the most common biases against it: that the memoir is a lesser form than the novel. That trauma narratives should somehow be over—we’ve had our fill … Febos rejects these belittlements with eloquence … In its hybridity, this book formalizes one of Febos’s central tenets within it: that there is no disentangling craft from the personal, just as there is no disentangling the personal from the political. It’s a memoir of a life indelibly changed by literary practice and the rigorous integrity demanded of it … Febos is an essayist of grace and terrific precision, her sentences meticulously sculpted, her paragraphs shapely and compressed … what’s fresh, of course, is Febos herself, remapping this terrain through her context, her life and writing, her unusual combinations of sources (William H. Gass meets Elissa Washuta, for example), her painstaking exactitude and unflappable sureness—and the new readers she will reach with all of this.”