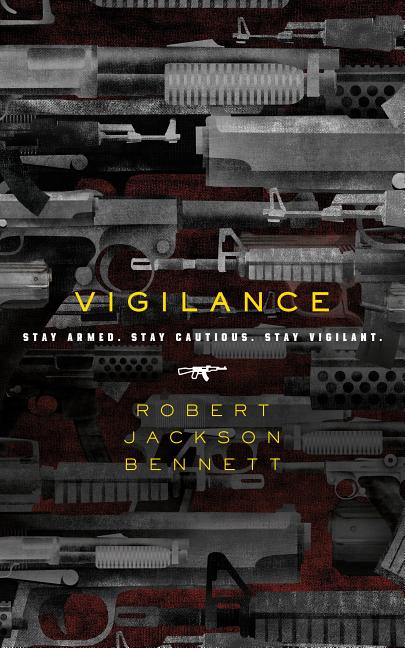 A dark science fiction action parable from an America that has permanently surrendered to gun violence.

What The Reviewers Say
Positive Martin Cahill,
Tor.com
Rarely do things that I read make me feel sick, but Vigilance, especially the sections of story set during the show itself, made my stomach churn. Not only because of the violence, which is sudden and brutal. And not only due to the growing tension, as person after person is effortlessly taken down. No…it’s mostly because we never see this violence experienced with any empathy or compassion; the victims are faceless, unknown, their lives playthings in the hands of the shooters, the studio executives. The distance Bennett maintains during this section is what sickens the most: the dispassionate observation of studio executives, the senseless enthusiasm of viewers at home. It captures the numbness, the exhaustion, and the constant desensitization to mass shootings in the real world and drives it home ... In the end, Bennett weaves together plot threads that culminate in a vision of what will ultimately come of America’s love affair with firearms, and the answer isn’t pretty. But of course, the reality of the situation now, in both fiction and truth, isn’t pretty either. And as the satire of Bennett’s brilliant novella begins to hue closer and closer to reality, the end becomes more and more evident until it is a barrel staring up at you through the pages like an inexorable threat: this obsession will end in destruction.
Read Full Review >>
Mixed Liz Bourke,
Locus Magazine
Less a story than an intensely distilled mood, an atmosphere wrought out of the US’s worst instincts and dystopian obsessions, like Stephen King’s The Running Man, but with its gamified violence updated for the 21st century and made totalising, all-consuming, and entirely manipulated to deliver sales from advertising ... Grim, self-assured, and elegantly written,
Read Full Review >>
Mixed David Walton,
The New York Journal of Books
In this, Bennett perhaps undermines his own purposes. One clear message of the book is that the 'other' should not be feared and reduced to a faceless threat. In writing it, however, Bennett does the same to gun owners, depicting them as unthinking warmongers who will destroy our way of life. Few gun aficionados would see themselves in this description ... well written, with strong characterization and a compelling plot, making it as difficult for the reader to turn away from the book’s horror as it is for viewers of the show ... likely to be praised by those who agree with Bennett’s political perspective and reviled by those who don’t.
Read Full Review >>
See All Reviews >>
SIMILAR BOOKS
Fiction

Nona the Ninth
Tamsyn Muir
Positive
What did you think of Vigilance?
© LitHub | Privacy