This Is Why I Came 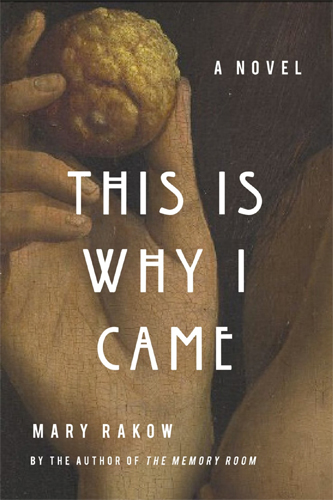 A woman sits in prayerful meditation, waiting to offer her first confession in more than thirty years. She holds a small book on her lap, one that she’s made, and tells herself again the Bible stories it contains, the ones she has written anew, for herself, each story told aslant, from Jonah to Jesus, Moses to Mary Magdalene.

What The Reviewers Say
Positive Ron Charles,
The Washington Post
Not everyone will take this little book and eat it up. Readers who treat the Scriptures as fragile goblets of orthodoxy may find This Is Why I Came upsetting or distasteful. And yet, an unmistakable glimmer of faith radiates from these biblical reimaginings, even though they’re presented as the work of a woman who “can’t believe in God.” What the novel demands is a willingness to enter the lacunae of the familiar Bible stories and wrestle with the angel of Rakow’s poetic vision.
Read Full Review >>
Positive Clea Simon,
The Boston Globe
Imagine not a vengeful God, but a scared one, hiding away. Picture that same divinity capable of avenging the smallest slights by lashing out with unimaginable wrath. Pair that with a rational, caring cast of humans, subject to the whims of their creator but also, in some ways, responsible for him — and all the while wrestling with the slippery mystery of faith. That’s what Mary Rakow has done, with intriguing results.
Read Full Review >>
Positive Mary Mann,
Bookslut
We know why Jonah lost his faith, but not Bernadette — and we don't know whether she'll get it back. But the reader starts to see a different kind of faith form, built on her revision of the testaments (particularly the Old, which is more vivid and startlingly rendered than the New). In Bernadette's Bible, man and God are both vulnerable to each other's disappointment, both culpable for their own mistakes. Whether God made man in his image or vice versa begins to seems moot. Either way, we're in the soup together.
Read Full Review >>
See All Reviews >>
SIMILAR BOOKS
Coming Soon

The Bartender's Cure
Wesley Straton
Mixed
What did you think of This Is Why I Came?
© LitHub | Privacy