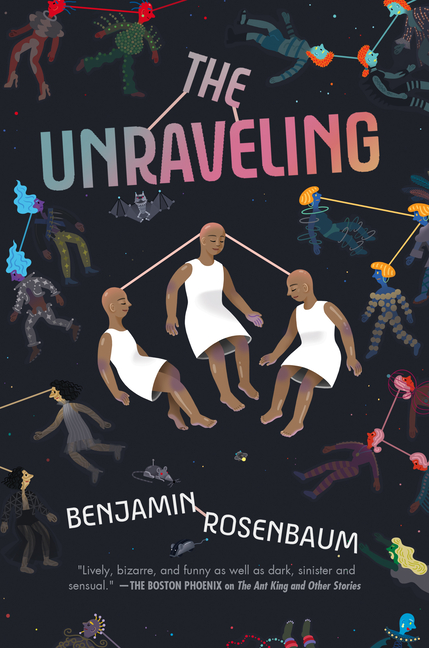 In a society where biotechnology has revolutionized gender, young Fift must decide whether to conform or carve a new path.

What The Reviewers Say
Rave JAKE CASELLA BROOKINS,
The Chicago Review of Books
A wildly inventive, funny, and ultimately quite heartfelt novel, The Unraveling is a chaotic romp of gender deconstruction packaged up in a groovy science-fictional coming-of-age tale ... a challenging but rewarding novel, one of the best examples I’ve encountered of a deeply weird and inventive world that just throws the reader in at the deep end and lets them figure it out ... By disconnecting gender completely from biology, and making us spend a while understanding the difference between Vails and Staids, Rosenbaum sneakily and quite effectively plays with the constructedness of gender. Fift’s predicament feels genuinely teenage, trying to sort out changing desires and roles in a society that only seems to want conformity; the novel also does an astonishing job of thinking through queerness without mapping itself to our genders or sexualities. The Unraveling casually encourages you to wrap your head around new pronouns, its invented genders feel as real and potentially as restrictive as the ones we’re familiar with, and it has a keen sense for difference, for the universality of not quite fitting into the role laid out for you ... It’s also a very funny novel, one I found myself giggling at constantly. Rosenbaum’s sheer inventiveness is a constant pleasure ... Part of why The Unraveling is so readable, despite its deeply estranging setting, is how it captures a sense of frenetic family life in ways that constantly ground and enliven the action with a kind of sitcom chaos ... The entire story is permeated, charmingly and cleverly, with things simultaneously silly and serious ... The novel is not without its hurdles for the reader — the very large cast and constant neologisms take a while to get a handle on. Although the novel follows Fift closely, ze’s perspective is always in three different bodies, which causes some disorienting jumps mid-paragraph. But, once you get into the flow of it, the kaleidoscopic narration becomes one of the novel’s charms ... Chock full of ideas, built around family life and teenage crushes even as it ponders massive social change and long-term civilizational survival, The Unraveling is a heady, thoughtful, and absorbingly creative adventure.
Read Full Review >>
Rave Nell Keep,
Booklist
This beautifully written debut is a thorough, well-realized picture of a world with a radically different concept of gender and the body that nonetheless has its own forms of oppression. Rosenbaum’s novel is essential reading for anyone interested not only in speculative fiction that plays with gender norms, but also in quality sf in general. Highly recommended.
Read Full Review >>
Positive Publishers Weekly
... ambitious ... Embedded in a narrative frame about civilizational expansion and collapse, Rosenbaum’s story offers a complex meditation on fame, taboo, gender, and social control. Dense, inventive worldbuilding coupled with the use of neopronouns will present some readers with a steep learning curve, but it’s tempered by the competent plotting and deeply human emotional core. Readers of secondary-world science fiction and science fantasy will find this to be as mind-bending as it is satisfying.
Read Full Review >>
See All Reviews >>
SIMILAR BOOKS
LGBTQ Stories

I Keep My Exoskeletons to Myself
Marisa Crane
Rave
Fantasy

X
Davey Davis
Rave
What did you think of The Unraveling?
© LitHub | Privacy