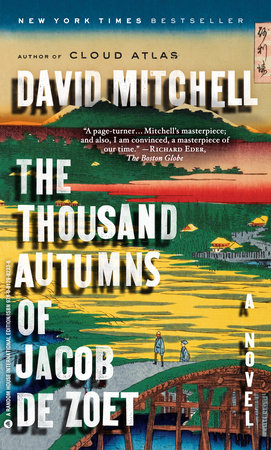 Jacob de Zoet, a devout young clerk at Dejima in 1799, has five years in the East to earn a fortune large enough to win the hand of his fiancée in Holland.

What The Reviewers Say
Rave Joshua Rothman,
The Rumpus
The Thousand Autumns is a strange, chimeric creation. It’s deeply researched, like a proper historical drama, but it’s also luridly melodramatic, like a 19th century adventure story … There are twists and turns in the plot, but they happen within the safe confines of genre, and so can’t be truly surprising: forbidden cross-cultural romances blossom and are thwarted; irritating characters introduced early turn out to be basically decent; you know you’ve met the villain because he looks ‘like a hunting dog listening to the sound of its prey.’ Part of the novel’s cleverness is that these tropes strike Jacob as unreal, too, as he combs through the company’s books on Dejima: In some ways, he’s a 19th century man trapped in the 18th century. But it’s also the case that The Thousand Autumns is a special kind of modern novel, one in which the story steps through genres the way a concerto steps through its movements.
Read Full Review >>
Rave Richard Eder,
The Boston Globe
With The Thousand Autumns of Jacob de Zoet, Mitchell has retained his virtuoso variety and restrained it; he makes it serve as well as enrich a human narrative that grips and moves. Its pages boast enough intricate turns to invite lingering; nevertheless they refuse it. Thousand Autumns is a page-turner. It is Mitchell’s masterpiece … The richness of Thousand Autumns, its innumerable side stories, its minor characters who refuse to be minor, can hardly be replicated in a brief review. And too much of the suspense would be given away — some already has, but the supply is barely scratched — by more detail. What remains to note, after my masterpiece tag, is the poetic fineness of the writing.
Read Full Review >>
Rave Ron Charles,
The Washington Post
Yes, the novelist who's been showing us the future of fiction has published a classic, old-fashioned tale. It's not too early to suggest that Mitchell can triumph in any genre he chooses … Mitchell is working within a literary tradition stained by Western slurs about the inscrutable ways of orientals, their seductive mysticism and occult sensuality, but he represents and deconstructs those racist stereotypes with a shipload of fascinating domestic and imported characters … Even as the forces of evil ramp up, this remains a resolutely thoughtful novel about a country wrenched into the modern age. Carefully controlling all contact with the West, Japan reveres its official translators, its only windows on the world. And so language serves as Mitchell's central subject throughout The Thousand Autumns.
Read Full Review >>
See All Reviews >>
SIMILAR BOOKS
Fiction

The Magician
Colm Tóibín
Rave
What did you think of The Thousand Autumns of Jacob de Zoet?
© LitHub | Privacy