The Selfless Act of Breathing 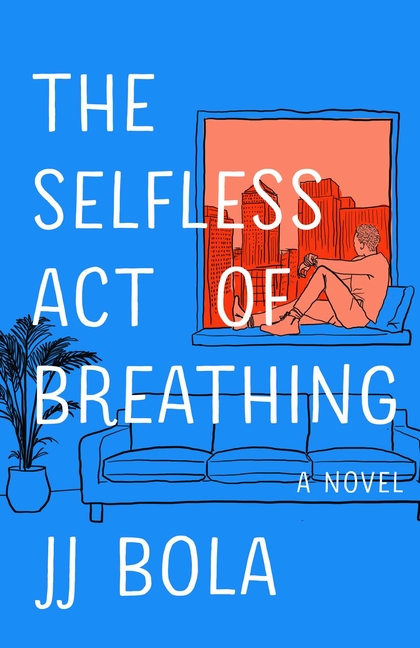 Michael Kabongo is a British-Congolese teacher living in London on the cusp of two identities. He seems to have it all, but behind closed doors, he's been struggling with the overwhelming sense that he can't address the injustices he sees raging before him--from his relentless efforts to change the lives of his students for the better to his attempts to transcend the violence and brutality that marginalizes young Black men around the world.Then one day he suffers a devastating loss and Michael decides to spontaneously pack up and go to America. Michael travels everywhere from New York City to San Francisco, partying with new friends, sparking fleeting romances, and splurging on big adventures, with the intention of living the life of his dreams until the money in his bank account runs out.

What The Reviewers Say
Positive Hephzibah Anderson,
The Observer (UK)
Bola’s ear for rhythm and cadence is sharp, and he lets characters soliloquise as if acing a poetry slam, their diction inflected with the street and the pulpit as they riff on cities, black history, police brutality ... If the novel’s lyricism sometimes feels over-honeyed...Michael himself remains enigmatic, keeping the reader alert. Near the end, Bola makes an interesting decision to skip a dramatic pivot point; though sure to irritate some, this imbues the book’s closing scene with mystery, and honours the weight of its themes while providing a spark of hope.
Read Full Review >>
Mixed Michael Donkor,
The Guardian (UK)
Bola’s filmic snapshots...are a vivid counterpoint to the mournful protagonist’s journey towards fulfilling his dark 'pact' ... The novel’s conceptual concern with the limited routes available for black people to find meaningful release from systemic racism is, without question, important and emotive ... Additionally, the novel’s intensity and earnestness are engrossing, and the reader is drawn along by a grim curiosity about whether Michael will see his plan through. However, the book struggles in some respects. Mental health challenges for black men are worthy terrain for the contemporary novelist ... But this novel, however heartfelt, rarely offers new, insightful or affecting investigation into the turmoil of suicidal ideation ... Largely, this is a result of stylistic choices. Though there are moving passages in which Michael’s distress is laid bare in powerfully raw terms...this directness and sensitivity is mostly absent. More often, there is a somewhat grandiose, ponderous and ultimately distancing tone to scenes ... Michael’s unexpected and seemingly revelatory relationship with an exotic dancer, Belle, in New York is presented in overblown phrases ... This novel’s great potential to reveal new truths about the intersectional minefields that black men negotiate is compromised by a brand of lyricism that distracts rather than illuminates.
Read Full Review >>
Mixed Jonathan McAloon,
Financial Times (UK)
Bola is also a poet, essayist and mental health worker, and his work often covers fragile masculinity, its codes and performance. He writes powerfully in this book about belonging, the legacy of colonialism, and kindness between young men who fear being thought 'weak' ... The author writes with penetration about vulnerability. But, in allowing Michael unfettered emotional expression, his prose can occupy an awkward register, its lyrical grandeur tainted by an air of platitude ... It would be wrong to penalise Bola for risking a vulnerability that his own characters stifle themselves by withholding ... But his prose risks conveying less essential meaning and emotional depth than it announces. This is a shame, because this book’s message is so important ... The Selfless Act of Breathing is most astute when it allows us to see things Michael can’t. Not just the positive influence he has on his environment, but also how the care that he offers is in fact returned to him. Bola captures the insurmountable paradox of feeling worthless, and of suicidal thoughts.
Read Full Review >>
See All Reviews >>
SIMILAR BOOKS
Coming Soon

Victory City
Salman Rushdie
Rave
What did you think of The Selfless Act of Breathing?
© LitHub | Privacy