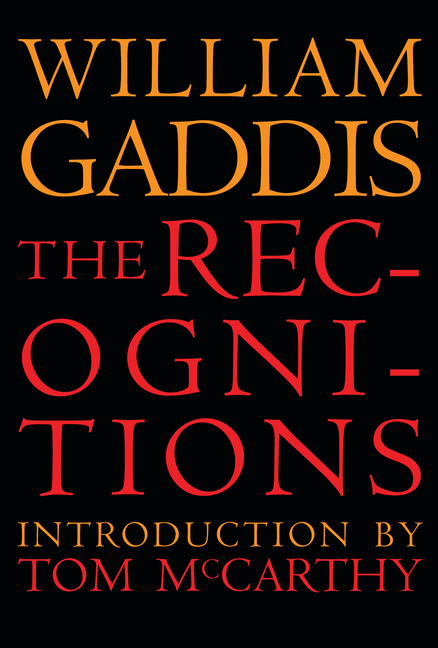 The Recognitions is a sweeping depiction of a world in which everything that anyone recognizes as beautiful or true or good emerges as anything but: our world. The book is a masquerade, moving from New England to New York to Madrid, from the art world to the underworld, but it centers on the story of Wyatt Gwyon, the son of a New England minister, who forsakes religion to devote himself to painting, only to despair of his inspiration. In expiation, he will paint nothing but flawless copies of his revered old masters--copies, however, that find their way into the hands of a sinister financial wizard by the name of Recktall Brown, who of course sells them as the real thing.

What The Reviewers Say
Rave Christopher Beha,
Harper\'s Magazine
Gaddis has an incredible knack for the cadence of spoken English, and once a reader catches the rhythm of the book the difficulties largely disappear. I don’t want to overstate this point. These novels demand more effort on the reader’s part than the average page-turner. Above all, they demand attention—a commodity in little supply these days ... There was something exciting about returning to books that asked something of me. And they rewarded my investment copiously. I count my second time through these novels—like my first—among the great literary experiences of my life.
Read Full Review >>
Rave Craig Hubert,
The Observer
The Recognitions is a book that is constantly slipping away from the reader, requiring a level of attention and commitment rare for the novel in the present day. The book, dense with references to religion, mythology and art, is populated by a host of characters who oscillate between fact and fiction ... For advocates, the book retains its initial charge ... Despite its contemporality, The Recognitions remains in the literary imagination as a book that is difficult to read, mostly due to its length (the new edition clocks in at 945 pages). Even though Moore’s exhaustive annotations of the book’s weaving references and storylines, first published in 1982 and now fully available online, make it more accessible than ever, it remains a cult item ... It may be that after 65 years, the world has finally, for better or worse, caught up to Gaddis’s vision in The Recognitions.
Read Full Review >>
Rave Scott Bradfield,
The Los Angeles Times
Before you commit to reading William Gaddis’ two greatest novels, JR and The Recognitions — recently reissued by New York Review Books with new introductions — you need to get a few things straight. First of all, this isn’t going to be a fly-by-night quickie, some passing summer fling you’re going to leave behind, dog-eared and water-stained, in a cabin or resort. This has to be a long-term relationship or it won’t mean anything to either of you. Their surfaces will seem daunting but look beyond these novels’ haughty, hefty façades. Once you get to know them inside, they’re much more fun than they look. They will make you laugh out loud. They will absorb you. They will keep you coming back for more ... Pick them up curbside from your local bookstore, bring them home and shut the doors. Everything you need to know about life is bubbling away under the covers of these two world-size books.
Read Full Review >>
See All Reviews >>
SIMILAR BOOKS
Coming Soon

Fellowship Point
Alice Elliott Dark
Rave
What did you think of The Recognitions?
© LitHub | Privacy