The Reason You're Alive 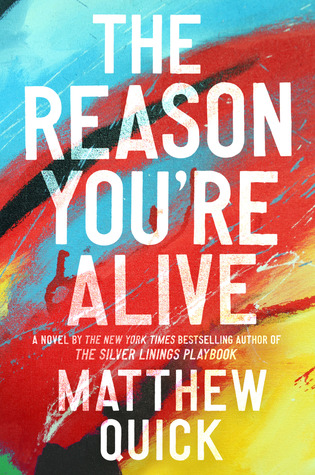 From the author of The Silver Linings Playbook, a novel about a Vietnam vet who, after a car accident and a brain tumor diagnosis, embarks on a quixotic crusade to track down his nemesis from the war.

What The Reviewers Say
Rave Malcolm Forbes,
The Minneapolis Star Tribune
...an entirely original work, at once poignant and uproarious, thanks in no small part to the uncensored opinions and audacious exploits of its compelling protagonist ... This is a novel that thrums with energy, and the source of it is its foul-mouthed, big-hearted, larger-than-life narrator. Granger, a 'dangerous right-wing grandpa,' is an unstoppable force whose presence fills each page and dominates every scene ... When Granger veers close to caricature, Quick tones down his antihero’s brashness and reveals a tender side — doting on his granddaughter, looking after his troubled wife, mourning those who have 'bought the bullet.' The end result is a vibrant and compassionate tale of a complex man finding his way in a divided America.
Read Full Review >>
Rave Matthew Franck,
The St. Louis Post-Dispatch
Author Matthew Quick traffics heavily in such life-worn souls, oddballs trying but failing to reach one another, until circumstances leave them no choice. His characters don’t connect so much as collide, more times than not with sharp comedic effect ... candor and honesty gives this first-person narrative its potency. It also supplies the humor, with David emphatically reminding us he is not a bigot or a racist, even as he tramples on societal discretion ... What this novel offers is a hope that we have the capacity to get beyond what offends us about one another. Perhaps, at this particular political moment, that’s plenty.
Read Full Review >>
Mixed Samantha Nelson,
The AV Club
While the book is overall light and sometimes laugh-out-loud funny, it shifts tone quickly between a rom-com-style plot where David tries to set Hank up with Sue to David’s survivor’s guilt of managing a relatively normal life when so many of his fellow soldiers couldn’t ... In classic Quick fashion, the novel is full of intriguing supporting characters. But at only 240 pages, the book leaves most of them largely unexplored. That’s fine in some cases where it’s clear that David is just getting a glimpse into their lives, but it makes too many of the book’s conflicts feel glossed over ... The Reason You’re Alive too often feels divided into how David sees himself and how Hank sees him. It would have been nice to really get the perspective of one of David’s friends about how they were able to see through his often stereotypical rhetoric to get to like and respect the good man underneath.
Read Full Review >>
See All Reviews >>
SIMILAR BOOKS
Coming Soon

The End of the Day
Bill Clegg
Positive
What did you think of The Reason You're Alive?
© LitHub | Privacy