The Perfect Nine: The Epic of Gĩkũyũ and Mũmbi 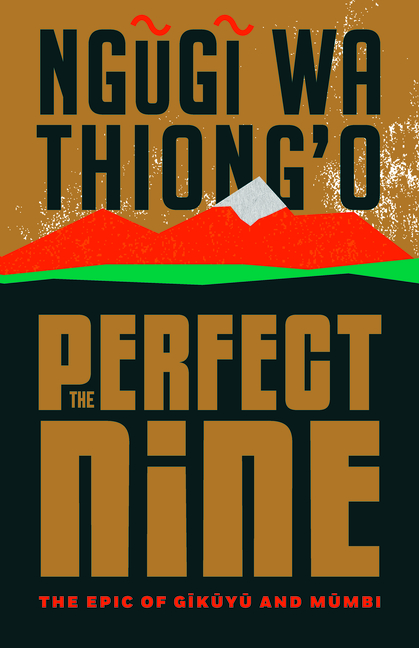 In his first attempt at the epic form, Ngũgĩ tells the story of the founding of the Gĩkũyũ people of Kenya, from a strongly feminist perspective. A verse narrative, blending folklore, mythology, adventure, and allegory, The Perfect Nine chronicles the efforts the Gĩkũyũ founders make to find partners for their ten beautiful daughters—called "The Perfect Nine"—and the challenges they set for the 99 suitors who seek their hands in marriage.

What The Reviewers Say
Positive Rumaan Alam,
The Washington Post
Though it bills itself as a novel, that very term is a product of a European sensibility. The subtitle — 'The Epic of Gikuyu and Mumbi' — is more useful ... a work of myth, rendered in verse; you can hear the voice of the person relaying the story ... Is there a fundamental human desire for story, a way to explain the world around us? The Perfect Nine seems to answer that desire ... The Perfect Nine has the hallmarks of myth: exaggeration, adventure, magic, humor. It made me think of my first exposure to classical narratives .... while Zeus and his associates were forever raping women, The Perfect Nine feels comparatively feminist.
Read Full Review >>
Rave Alex Crayon,
World Literature Today
[A] triumph of the form ... An origin story told in flowing verse narration ... Ngũgĩ composes a wisdom-dense narrative with a rhythm befitting the swirling motion of mythos ... It is this rhythmic progression of the narrative that lends The Perfect Nine a certain dreamlike quality. The story feels both ancient and immediate as the chronicle drifts seamlessly between reverie and suspense ... Ngũgĩ crafts a beautiful retelling of the Gĩkũyũ myth that emphasizes the noble pursuit of beauty, the necessity of personal courage, the importance of filial piety, and a sense of the Giver Supreme ... Ngũgĩ overlays the Perfect Nine’s feminine power onto the origin myth of the Gĩkũyũ people of Kenya in a moving rendition of the epic form.
Read Full Review >>
Rave Nilanjana Roy,
Financial Times (UK)
In this rousing new version, the story becomes a powerfully feminist tale ... The Perfect Nine uses a deceptively simple language that lays bare deep truths ... Ngugi is most celebrated for his novels and plays, but perhaps this electric myth, with its free and fearless heroines and its vast narrative arc, chose the perfect teller.
Read Full Review >>
See All Reviews >>
SIMILAR BOOKS
Fiction

All the Broken Places
John Boyne
Mixed
What did you think of The Perfect Nine: The Epic of Gĩkũyũ and Mũmbi?
© LitHub | Privacy