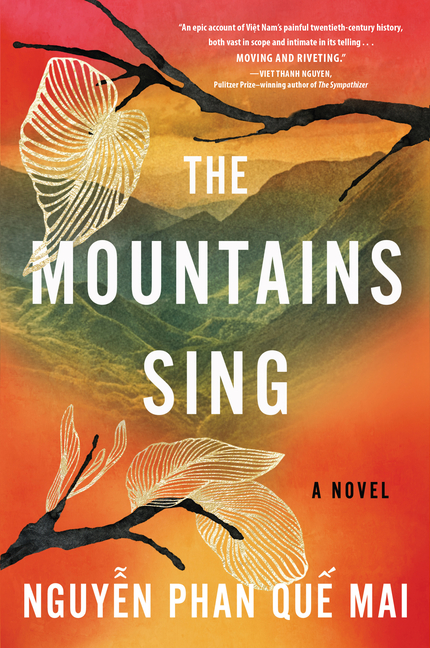 In this multigenerational tale set against the backdrop of the Việt Nam War, Trần Diệu Lan, who was born in 1920, was forced to flee her family farm with her six children during the Land Reform as the Communist government rose in the North. Years later in Hà Nội, her young granddaughter, Hương, comes of age as her parents and uncles head off down the Hồ Chí Minh Trail to fight in a conflict that tore not just her beloved country, but her family apart.

What The Reviewers Say
Rave Gaiutra Bahadur,
The New York Times Book Review
... absorbing, stirring ... Que Mai contains her saga with a poet’s discipline, crafting spare and unsparing sentences, and uplifts it with a poet’s antenna for beauty in the most desolate circumstances. She evokes the landscape hauntingly, as a site of loss so profound it assumes the quality of fable ... Through her depiction of sympathetic characters suffering under a repressive regime, Que Mai offers us in The Mountains Sing a novel that, in more than one sense, remedies history.
Read Full Review >>
Rave THÚY ĐINH,
NPR
Nguyễn Phan Quế Mai has created a luminous, complex family narrative ... Quế Mai [has] an astute and graceful ability to sustain contradictory truths about war, displacement, aesthetic representations, and human nature ... Most importantly, the novel helps all of us see 'the enemy' not as abstract or demonic, but corporeal, even familial ... In depicting the dire consequences of war and Marxist ideology, which forced citizens and family members to become either traitors or patriots, The Mountains Sing affirms the individual's right to think, read, and act according to a code of intuitive civility, born out of Vietnam's fertile and compassionate cultural heritage.
Read Full Review >>
Rave Shaun McMichael,
Pop Matters
Through its women's language, the novel is a sumptuous feast of Vietnamese folklore and proverbs which chuckle with grim humor of a people forged by joy in the face of struggle ... Through her characters' voices, Mai's is direct and urgent in her anti-war beliefs ... It could be said that The Mountains Sing's single flaw is that Grandmother Dieu Lan is just too perfect. However, this misunderstands the novel's mode as part family saga, part eulogy. The granddaughter's veneration of her grandmother is culturally bound ... True, Mai's novel lacks the intrigue and the restless struggle for identity that makes Viet Than Nguyen's works so page-grippingly tumultuous. But Mai's work offers us something equally significant. Despite the famines, the bombings, and executions, The Mountains Sing maintains a sense of the sublime on every page. Mai's gentle prose always comes back to Grandma Dieu Lan's enduring harmony with the land, her history, and all of humankind.
Read Full Review >>
See All Reviews >>
SIMILAR BOOKS
Fiction

Mount Chicago
Adam Levin
Mixed
What did you think of The Mountains Sing?
© LitHub | Privacy