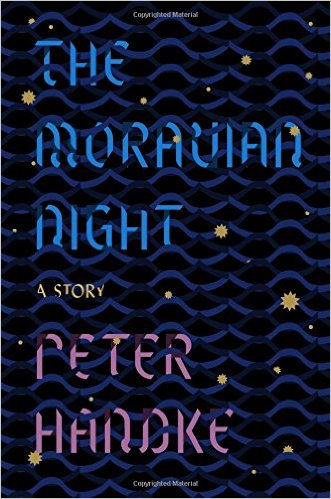 Mysteriously summoned to a houseboat on the Morava River, a few friends, associates, and collaborators of an old writer listen as he tells a story that will last until dawn: the tale of the once well-known writer’s recent odyssey across Europe.

What The Reviewers Say
Positive Joshua Cohen,
The New York Times Book Review
...might be the most important novel of Handke’s career ... The more the European press assailed and censured Handke, the more defiant he became, as if in a perverse attempt to remind Austria and a reunified Germany of the type of radical, independent, infuriating writer they had once relied upon to de-Nazify their culture and re-establish civic life. In The Moravian Night, Handke simultaneously escalates and surrenders that campaign ... The 'former writer' finds the Balkans that emerges from the fogs, toward the conclusion of The Moravian Night, unrecognizable: a fractious patchwork of new alphabets and towers, repopulated by strangers equipped with smartphones, whose 'comportment clashed with his conception, or his will? his ideal? his idea? — his sense of a narrative based on all he had just witnessed.' Handke has written a poignant book almost despite himself, or to spite the day, out of the grim confusion of his ruins.
Read Full Review >>
Mixed Adam Kirsch,
The New York Review of Books
...at its core is a defense of his highly idiosyncratic vision of what Serbia, and the Balkans in general, mean or ought to mean ... the book, in all its portentousness and grandiosity, is best understood as a restatement of Handke’s myth of the Balkans. This involves a nostalgic resistance to modern life, progress, and homogenization—in short, to everything associated with the European Union and the borderlessness it sponsors ... One might say that The Moravian Night is the story of a Balkan soul in search of Balkanness wherever he can find it ... Yet Handke wants nothing to do with the traditional instruments of storytelling, such as continuous plot and developed character. What interests him is the evocation of very brief moments, epiphanic instants when the trappings of the world fall away and a more immediate, intuitive truth shines forth ... Handke seals himself in his own self-righteousness: anyone who criticizes his art or his politics is a petty, spiritless cosmopolitan. Luckily he will always have the Balkans to go back to—if not the real Balkans, then the ones he has built for himself out of obstinacy and pride.
Read Full Review >>
Positive Aaron Coats,
The Chicago Review of Books
The old writer’s storytelling technique is reminiscent of Truman Capote’s In Cold Blood. Sensationalizing or downplaying occurrences—from the waving of a child’s hand outside the bus to the recurring appearance of a familiar woman throughout his travels—he keeps his and Handke’s story intriguing ... Is writing an escape or not? Is the 'damned jabber' the narrator commenting on the writer’s storytelling or merely repeating the sentiment of the writer on his reasoning for writing or his feelings about having to tell the story instead of write it? The answers are deliberately hazy. Then again, that is the point. Both the writer and narrator are storytellers changing it as they see fit for the greatest impact, creating the demand for them to 'Come on, out with it! Tell us!'”
Read Full Review >>
See All Reviews >>
SIMILAR BOOKS
Fiction

Mona at Sea
Elizabeth Gonzalez James
Positive
What did you think of The Moravian Night?
© LitHub | Privacy