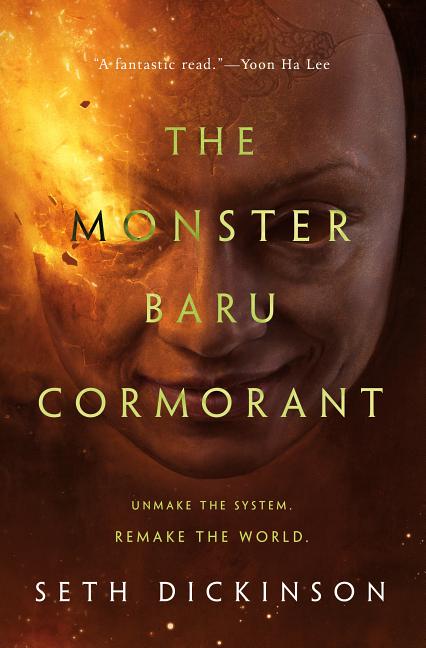 In the sequel to the geopolitical fantasy The Traitor Baru Cormorant, protagonist Baru is now the cryptarch Agonist―a secret lord of the empire she's vowed to destroy. Hunted by a mutinous admiral, haunted by the wound which has split her mind in two, Baru has a chance to trigger a war that will consume the Masquerade.

What The Reviewers Say
Rave Amal El-Mohtar,
The New York Times Book Review
The Monster Baru Cormorant...is...a tense and mesmerizing geopolitical fantasy that asks whether it’s possible to destroy an empire from within without it digesting you first ... Monster expands and deepens the world Baru inhabits ... The machinations are often dizzying in their interlocking complexities, but always utterly absorbing—though readers may well want to refamiliarize themselves with the first book, or with the author’s own primer on the subject, before diving in to this one ... the meat of Monster is an exploration of...fascinating characters and their competing obsessions.
Read Full Review >>
Rave J. S. Fields,
New York Journal of Books
The Monster Baru Cormorant offers a deeper, yet still hedonistically seductive look into the Empire of Masks. Multiple POV narrators, jumping from first person to third, present to past, flawlessly detail the web of events that spiral around Baru as she drives herself mercilessly forward to honor Tain Hu’s requests ... A hard, mesmerizing book, The Monster Baru Cormorant will have deep appeal with fans of both dark and low fantasy ('hard' fantasy), as well as those looking for the world-as-character detailing found in many of the more popular epic/high fantasy worlds.
Read Full Review >>
Positive Niall Alexander,
Tor.com
The Monster gets off to a deliberate and demanding start, but from this point in the novel on, with the busywork of worldbuilding and whatnot behind him, Dickinson truly lets loose. A great many pieces of the puzzle come together, ramping up in parallel towards a crushing conclusion ... though I hate to say it, [Dickinson] lets his grip slip a little, but beyond the bumps in the road...it’s back to business as usual—and in these books, business as usual boils down to heart-breaking, brutal, shrewd and often shocking storytelling. A fiendishly clever psychological thriller with sharp speculative edges, The Monster Baru Cormorant is morally abhorrent, yet massively satisfying.
Read Full Review >>
See All Reviews >>
SIMILAR BOOKS
Fantasy

40
Alan Heathcock
Positive
What did you think of The Monster Baru Cormorant?
© LitHub | Privacy