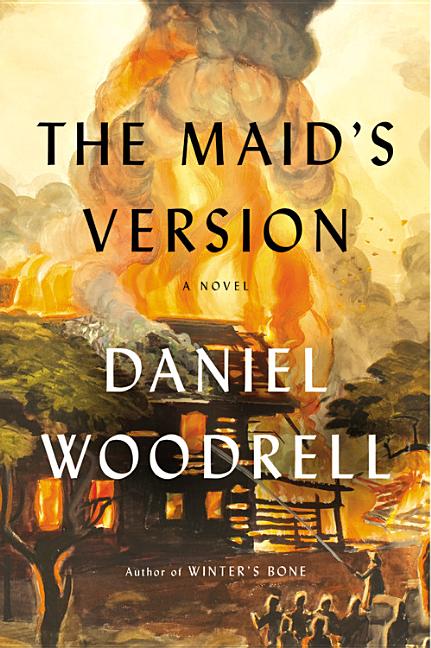 In 1929, after her sister is killed in a deadly dance hall fire Alma thinks she knows who is to blame for the inferno—and that its roots lie in a dangerous love affair. Her dogged pursuit of justice makes her an outcast in her small town and causes a long-standing rift with her own son. Years later she tells her version of the story to her young grandson Alek.

What The Reviewers Say
Rave Eileen Battersby,
The Irish Times
Southern Gothic unleashes full fury in this masterful narrative from one of the finest writers at work. Daniel Woodrell, Ozark-born and -based, appears to have absorbed something elemental from the eerie plateau region of the central United States. He understands the essential menace deep within human nature and that the savage tends to stalk art at its most sublime ... To describe Woodrell as a great American writer is a lamentable understatement; this new novel is reminiscent of Cormac McCarthy at his finest ... His prose is a thing of hard beauty, simple, rhythmic, at times nuanced with biblical intensity that counters the curt verbal exchanges uttered by characters who are so often beyond caring. Alma still cares. Time has caused her to fester. It is this that sustains a novel that no reader is ever likely to forget ... Angry, tormented characters stalk the pages of this remarkable tale. Woodrell’s majestic gifts create an unforgettable impression of one woman’s life played out against a horrific crime that was never solved but remained to haunt all involved. Yet again Daniel Woodrell has created a wonder of power and barbaric grace.
Read Full Review >>
Rave S. Kirk Walsh,
The New York Times Book Review
...exsquisite ...In The Maid’s Version, Woodrell orchestrates a captivating, almost operatic narrative of how tragedy and grief can transform places and people ... With an economical brilliance similar to that of Denis Johnson in Train Dreams, Woodrell delivers a stunning story of one small town, and all of its profound complexities and opaque mysteries. It’s a considerable achievement, and a pleasure to read.
Read Full Review >>
Rave Sarah Hall,
The Guardian
Daniel Woodrell has made a name as a master of prose with personality – a densely descriptive, gamey form of storytelling, one might say traditional storytelling – of late rather an unfashionable mode ... the invocation of...muscular, expert voices, with their idiomatic tongues, has an enthralling effect, both exhilarating and terrifying. You don't want to sit on their knees, necessarily, but you do want to pull up a chair and partake of the experience ... the narrative tenor of The Maid's Version is mightily unsentimental ... an exploration of the psychology of trauma, the roles and labels given to individuals in societies, as well as the relationship of poverty to impotence, of wealth to immunity, of sex to power ... The reader does eventually find out what happened...but that's not really the point. Woodrell's fiction has been described as 'southern noir', and his latest work does contain elements of crime, horror, femmes fatales, feuds and villains. But under the grisly, seductive, colloquial tone is a very unusual thing – a communitarian novel: a novel concerned with how we live – and sometimes die – together, how we share experiences through the rituals of speaking and writing, because that is the fundamental spirit and purpose of language.
Read Full Review >>
See All Reviews >>
SIMILAR BOOKS
Fiction

Better Luck Next Time
Julia Claiborne Johnson
Rave
What did you think of The Maid's Version?
© LitHub | Privacy