The Lost Book of Adana Moreau 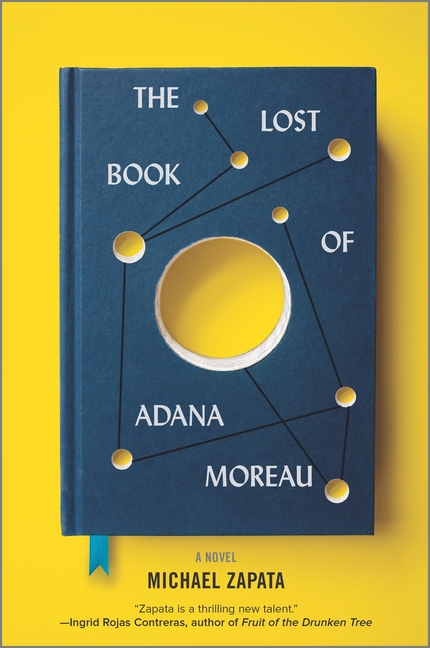 In 1929 in New Orleans, a Dominican immigrant named Adana Moreau writes a science fiction novel. Then she falls gravely ill. Just before she dies, she destroys the only copy of the manuscript. Decades later in Chicago, Saul Drower is cleaning out his dead grandfather's home when he discovers a mysterious manuscript written by none other than Adana Moreau.

What The Reviewers Say
Rave Jason Heller,
NPR
Smart and heart-piercing, Lost Book is a story of displacement, erasure, identity, mythology, and the ability of literature to simultaneously express and transcend our lives — not to mention reality ... Zapata tackles huge feelings and ideas in Lost Book, but he makes it look effortless ... There's an entire library's worth of imaginary books lurking within Lost Book, a ghostly bibliography that would have made Jose Luis Borges proud ... Lost City is wonderfully clever and erudite, but it all serves a deeper purpose. Zapata's multilayered concepts — most prominently, the theory of multiple worlds expounded by Maxwell — underscore his more immediate themes of family, diaspora, and the sway that patterns hold over our lives ... Zapata illuminates the reality-inventing power of storytelling itself.
Read Full Review >>
Rave Kathleen Rooney,
The Chicago Tribune
... big-hearted ... Zapata’s book is an eloquent argument that stories let humans shape what happens to and around them into significant patterns ... Full of stories within stories, Zapata builds his layers with a light touch, so that the found documents do not impede but rather enhance the flow and add to the texture ... Politically engaged, the book is deeply critical of betrayals and injustices of all kinds and in all parts of the globe, reckoning unsparingly with humanity’s hard-wired propensity both to destroy and to self-destruct ... Remarkably, Zapata’s tone is frequently gently or even absurdly comic and his sensibility is one of great love for human beings and for life itself. This seeming contradiction operates as the central tension that animates the entire novel ... Plenty of writers have responded to our current political moment with depictions of various dystopian near-futures, but Zapata’s stroke of brilliance is to set his book in the dystopian near-past. By portraying such recent apocalypses as the Argentine financial crisis of 2001, for instance, Zapata offers the insight that the world is not merely going to end, but already has ended countless times and is perpetually ending all of the time, especially if you’re not rich, not white, not powerful (but also even if you are) ... The events Zapata recounts here deliver an indelible portrait of a jubilant and generous story-teller — one from whom readers should look eagerly forward to hearing more.
Read Full Review >>
Rave Paul Di Filippo,
The Washington Post
... sedate and ruminative ... imbued with a fairy-tale vibe reminiscent of John Crowley, Nicholas Christopher and Reif Larsen. Overlaying the deftly conjured 20th- and 21st-century settings and events is a sense of eternality, of archetypes and mythic patterning ... Zapata’s own evident love for and knowledge of science fiction. He is no mere dabbler or trendy opportunist. He plainly knows the field inside and out and name-checks seminal figures with precision. His knowledge of the genre’s history allows him to brilliantly fabricate and insert other imaginary titles ... The result is a realistic alternate history of the field which harks back to Kurt Vonnegut’s imagined works of Kilgore Trout ... a truly satisfying closure that blends hope and despair ... Zapata’s carefully crafted prose oscillates between matter-of-fact and lyrically poetic, a tonal range that provides a very pleasant reading experience. Also stuffed not inelegantly between the microcosmic doings are several larger incidents that limn the bloody and brutal history of the two centuries, including South American totalitarianism, European pogroms and the tragedy of Hurricane Katrina.
Read Full Review >>
See All Reviews >>
SIMILAR BOOKS
Coming Soon

Appleseed
Matt Bell
Positive
What did you think of The Lost Book of Adana Moreau?
© LitHub | Privacy