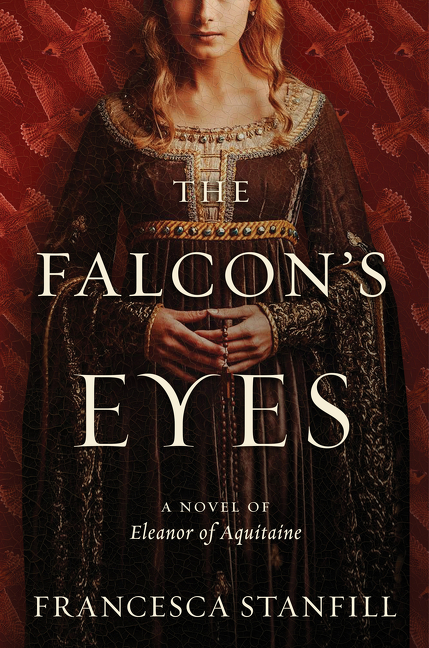 Set in France and England at the end of the twelfth century, the story of a spirited, questing young woman, Isabelle, who defies convention to forge a remarkable life, one influenced by the fabled queen she idolizes and comes to know – Eleanor of Aquitaine.

What The Reviewers Say
Positive Alida Becker,
The New York Times
The narrator of Francesca Stanfill’s The Falcon's Eyes longs for an independent life, but the realities of 12th-century Europe dictate otherwise...Isabelle de Lapalisse, the younger daughter of a noble but downwardly mobile Provençal family, is married off to a wealthy stranger whose devotion to his falcons is matched only by his lust for an heir...Initially attracted to Gerard de Meurtaigne — and to the comforts he lavishes on her — Isabelle eventually realizes that his love is contingent on her abject surrender...'My life would be controlled by my husband until I was old, and weary, and all the curiosity to see the world had been extinguished from me'...The plot sends Isabelle shuttling between England and France, with some dramatic revelations toward the close...But for long stretches it has a more languid pace, rooted in the details of the characters’ lives — not just meals and clothes but the social routines and rigid etiquette that define their movements, whether they’re maids or royals...Clever intrigues can sometimes subvert the power men hold over them, but is it possible to contrive an escape? At first, the ornamental bronze falcon Isabelle’s husband gives her is an 'emblem of failure'...Over time she comes to see it as a symbol of the freedom his living hawks find in the skies — yet she must never forget that the falcon’s eyes are always 'alert to kill.'
Read Full Review >>
Rave Kirkus
'Never before had I seen a woman who was old…yet alluring. Her fair skin was wrinkled, but her vivid dark eyes, framed by a luxuriant expanse of brow, were still beautiful and bespoke an undaunted spirit'...That’s our first glimpse of the legendary Eleanor of Aquitaine, English ruler and mother of rulers, in Stanfill’s lavishly detailed historical novel...That description is given to us by Isabelle, a brilliant young woman who tries and fails to fit the mold of baby-making machine that the age required...It’s disappointing that it takes 500 pages to get to this exciting encounter, but Stanfill amply fills the preceding pages with a portrait of the private struggles and desperation of aristocratic women like Isabelle who, despite their best efforts, fail to satisfy the ambitions of their husbands...Eleanor’s life and the complicated relationship between England and France play in the novel’s background until fate brings the two characters together...All the exotic, romantic elements of the medieval world—falconry, ancient ruins, rustic healers, feasts by warm candlelight, ominous prophecies—are here as well as a frightening figure from Isabelle’s past, intent on ruining her and those she loves...This whopper of a novel is perfect for readers who want to lose themselves in a long historical yarn.
Read Full Review >>
Rave Publisher\'s Weekly
Stanfill reimagines in her sharp latest medieval abbeys, aristocrats, and Lady Isabelle, the spirited confidante of Eleanor of Aquitaine...Set in France and England at the end of the 12th century, the story follows curious Isabelle, who at 17 marries Gerard, Lord de Meurtaigne, a wealthy, newly titled widower who wants a noble-born wife to give him an heir...Initially, Isabelle is enamored with Gerard and her new opulence, but she also fears Gerard will discover her 'furtive life' of hidden relics and potions given to her by a clairvoyant...They divorce after Isabelle fails to produce an heir, and she happily joins the vaunted Fontevraud Abbey as a lay noblewoman...Fireside vignettes feature Eleanor and Isabelle discussing history, poetry, and philosophy, all while the queen maneuvers to mold the court and preserve her legacy...The enriching dialogue between brave Isabelle and wise Eleanor consistently intrigues, as does the bewitching blend of tainted nobility, secretive domestics, and palace plots...This is a crackling historical.
Read Full Review >>
See All Reviews >>
SIMILAR BOOKS
Fiction

To Paradise
Hanya Yanagihara
Mixed
What did you think of The Falcon's Eyes?
© LitHub | Privacy