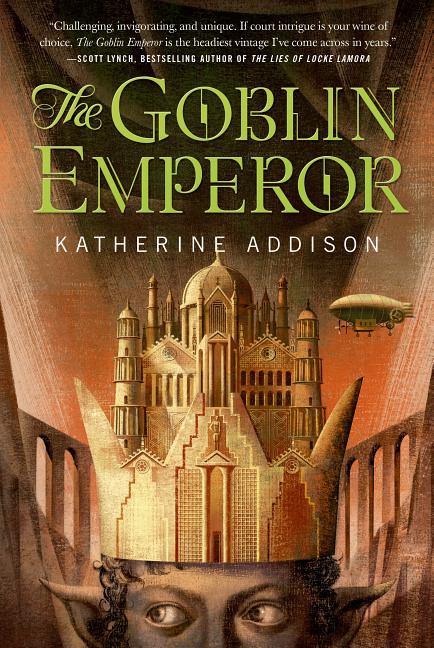 The youngest, half-goblin son of the Emperor has lived his entire life in exile, distant from the Imperial Court and the deadly intrigue that suffuses it. But when his father and three sons in line for the throne are killed in an 'accident,' he has no choice but to take his place as the only surviving rightful heir.

What The Reviewers Say
Rave Liz Bourke,
Tor.com
It should be emphasised right up front that while the worldbuilding is every bit as detailed and baroque as her previous solo novels under her other name, the mood leans far less toward the noir than The Doctrine of Labyrinths. The tone is overall much more hopeful, and the main character here far more likable, than in any of her previous novels ... a deeply engrossing read—every time I open a page, I find I simply get drawn into the story, but this is only partly because of Addison’s excellent ability to turn a phrase. The sheer compelling attractiveness of Maia’s character figures larger ... Addison’s worldbuilding is delightfully detailed and thorough ... marvellously welcoming ... A book you pick up and read when you’re tired and sad, and all unexpected it’s like being wrapped up in a comforting warm fuzzy blanket of glorious worldbuilding and shiny prose and decent people doing the best they know how ... the best fantasy I’ve read in quite some time. It’s certainly my favourite of the last great while, and though it’s early days yet, I suspect it may be the best single novel I read this year ... I vigorously recommend it, and I really hope that there’s a sequel in the works. Because I desperately want to read more.
Read Full Review >>
Rave Megan M. McArdle,
Library Journal
Court intrigue and politics are popular fodder for fantasy novels, but rarely have they been done better than in this fantastic new novel from Sarah Monette (writing as Addison). The writing is lovely, with characters who live and breathe. Maia, especially, will tug on the heartstrings of even the most hardened reader as he struggles to find kindness and allies in the imperial court.
Read Full Review >>
Positive David Pitt,
Booklist
The author combines steampunk and fantasy (this is a world of elves and goblins and the like) to tell an utterly captivating story. Addison has built a completely believable world, with its own language, customs, and history, but there are tantalizingly familiar elements (such as newspapers and pocket watches) that make us wonder from whence this world came and whether it might have sprung from our own, in a distant future. There are lots of unanswered questions here that will likely be addressed in a sequel.
Read Full Review >>
See All Reviews >>
SIMILAR BOOKS
Fantasy

The Memory of Souls
Jenn Lyons
Positive
What did you think of The Goblin Emperor?
© LitHub | Privacy