The Ghosts of Eden Park: The Bootleg King, the Women Who Pursued Him, and the Murder That Shocked Jazz-Age America 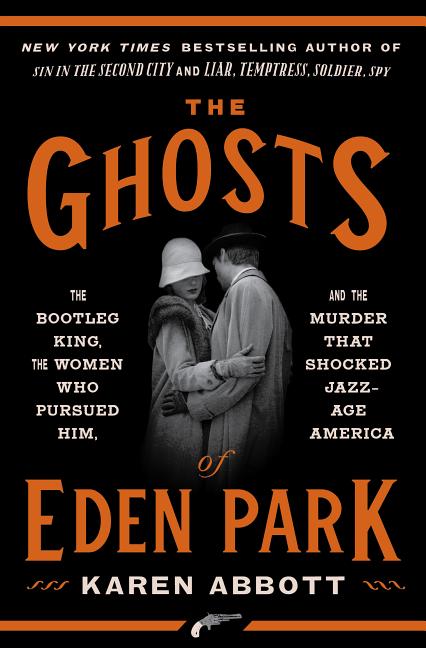 In the early days of Prohibition, a German immigrant named George Remus quit practicing law and started trafficking whiskey. Within two years he was a multi-millionaire. With politicians, legislators, city police, and Prohibition officers taking bribes of cash and liquor, Remus felt confidently above the law. However, he did not account for the dogged perseverance of Mabel Walker Willebrandt, an ambitious Department of Justice prosecutor determined to enforce the 18th Amendment.

What The Reviewers Say
Rave Harold Schechter,
The Wall Street Journal
...an exhaustively researched, hugely entertaining work of popular history that...exhumes a colorful crew of once-celebrated characters and restores them to full-blooded life ... My single, small complaint—one that has been made by earlier reviewers of Ms. Abbott’s books and that she pre-emptively addresses in a prefatory note—is that she cannot resist embellishing her tale with the kinds of novelistic flourishes that, if one is a stickler for strict historical accuracy, can seem like an unwarranted self-indulgence ... Still, for all the painstaking research that clearly went into her project, Ms. Abbott doesn’t pretend to be a scholar. Her métier is narrative nonfiction and—as this vibrant, enormously readable book makes clear—she is one of the masters of the art.
Read Full Review >>
Rave Daniel Stashower,
The Washington Post
... a gripping true-crime narrative ... Abbott crafts a gripping narrative from this previously obscure chapter in the 'noble experiment' of Prohibition. Her research is exemplary, and she lays out the details with a novelist’s deft touch. She makes particularly good use of trial transcripts during a riveting courtroom sequence ... During the Prohibition era, wrote F. Scott Fitzgerald, 'America was going on the greatest, gaudiest spree in history and there was going to be plenty to tell about it.' He would undoubtedly have appreciated this heady cocktail of murder, intrigue and Jazz Age excess.
Read Full Review >>
Mixed Ilana Masad,
NPR
There's a bit of a Law & Order structure to Ghosts, as Abbott sets up the events chronologically and at a sometimes dizzying pace — I wished in vain for a cast of characters section — and explores crime followed by trial, crime followed by trial ... Yet for all the successful and suspenseful storytelling, much of it gleaned from a 5,500-page-long trial transcript, it's somewhat unclear who and what we're meant to believe ... I personally needed more context about the time and place ... I wanted more of this in Ghosts of Eden Park, a deeper understanding of the politics surrounding Prohibition as related to immigrants (like Remus himself), African Americans, and the Ku Klux Klan's use of the new anti-liquor laws to recruit members and terrorize 'un-American' communities. But this might speak to my own sentiments regarding true crime and its ability to showcase the repetition of history ... As it stands, Karen Abbott's newest is a page-turner, teasing readers with its central mystery, and reaching its climactic final trial with a satisfying bang.
Read Full Review >>
See All Reviews >>
SIMILAR BOOKS
Biography

Tecumseh and the Prophet: The Shawnee Brothers W…
Peter Cozzens
Rave
What did you think of The Ghosts of Eden Park: The Bootleg King, the Women Who Pursued Him, and the Murder That Shocked Jazz-Age America?
© LitHub | Privacy