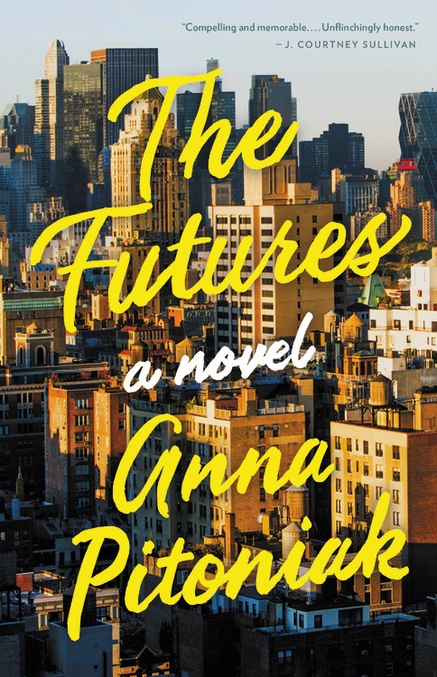 A novel set at the dawn of the 2008 financial collapse in which a young couple moves to New York City in search of success-only to learn that the lives they dream of may come with dangerous strings attached.

What The Reviewers Say
Positive Jean Zimmerman,
NPR
Julia and Evan pass the narrative baton back and forth in alternating chapters. Presenting different takes on the same events is not a new strategy, but it works well here, especially as they grow increasingly estranged, and their contrasting visions fall into sharper relief ... Pitoniak's precise and incisive powers of observation give us a book with startling grace notes ... A little amphetamine wildness is something The Futures could use. Yet Julie and Evan's world is not that of Kerouac, and the people who populate the New York City of 2008 have their own challenges. Grim as their world tends to be, it is our world, and Pitoniak gets much of it right.
Read Full Review >>
Mixed Pete Tosiello,
The Village Voice
With so many layers of character origin, The Futures is, variously, a campus novel, a Wall Street caper, a bildungsroman, and the saga of a long, slow breakup. But the most interesting element is that, in attempting to take stock of the financial crisis, Pitoniak is among the first novelists to try to articulate the Bloomberg era's significance ... among chapters set in Manhattan, New Haven, and the couple's hometowns, a tangible sense of place is fleeting, with breathless jumps from thinly sketched apartment to coffee shop to boardroom. The predictable setups and environs make too universal what should be an only-in–New York landscape of high stakes, high culture, and larger-than-life characters ... Pitoniak's grating tactic of alternating first-person narrators on a chapter-by-chapter basis (Evan's percolate, while Julia's drag) results in extraneous reiterations of the same scenes, and The Futures suffers from perfunctory dialogue and a flashback-laden narrative that sags during long passages of self-reflection. By casting the protagonists' plights within a tale of circumstance, the recession's impact is frequently minimized ... Pitoniak ultimately manages to answer many of the bigger questions she poses, and her greatest triumph is a perceptive speculation on the thin, blurry line separating crooks from heroes on Wall Street.
Read Full Review >>
Mixed Rayyan Al-Shawaf,
The Toronto Star
...the author manages to construct a solid little story out of individually flimsy building blocks, thanks to savvy plotting and nimble shifts in perspective ... Nonetheless, The Futures is saddled with banal fare ... Evan’s immersion in work doesn’t simply cause him to ignore Julia, but plunges him into a morally murky adventure that entrances the reader ... As she ratchets up the suspense, Pitoniak deepens the irony at the heart of The Futures. Julia and Evan are lovers who both crave affirmation. Yet they consistently fail to seek it from the most logical source: each other.
Read Full Review >>
See All Reviews >>
SIMILAR BOOKS
Fantasy

When We Were Young
Richard Roper
Positive
What did you think of The Futures?
© LitHub | Privacy