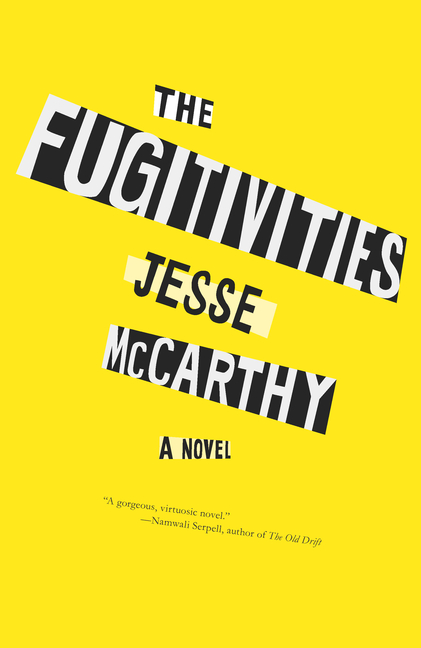 An Ivy Leaguer born to expatriate parents attempts to give back by teaching English at a New York City public school, only to be profoundly disillusioned by his apathetic students. Before he can leave the struggling African-American community to escape to South America, a chance encounter with a former globetrotting basketball coach alters his journey from one of self-discovery to one of maturation.

What The Reviewers Say
Positive Aaron Coates,
Chicago Review of Books
A debut novel should pack a wallop. Be it through the language or the themes, the feelings the text evokes in readers must be powerful and undeniable. Jesse McCarthy’s novel The Fugitivities does just that, and can perhaps be best explained as a music playlist curated by the likes of authors Jonathan Lethem and Percival Everett, with liner notes by musician and author Questlove. The book’s track list is just the right number of songs to get you to the connecting flight of your international rendezvous and contains the right amount of sentiment for contemplating your past and your future.
Read Full Review >>
Positive Norah Piehl,
Bookreporter
His essays demonstrate a curiosity and breadth of interests and knowledge that make them invigorating to read, tackling issues from R&B music to the writings of Toni Morrison, and demonstrating a rigorous commitment to expanding and experimenting with what’s possible in the essay form ... It is perhaps not surprising, then, that McCarthy’s latest book is equally ambitious in its scope and allusive in nature, offering references to everything from European cinema and architecture to the NBA, all couched in a rather unusual quest narrative that’s really a coming-of-age novel at its heart ... an unusual novel, and readers who come to it expecting a traditional quest narrative or a clear-cut denouement probably would be better served elsewhere. Reading it should be approached like an open-ended airline ticket. Readers can anticipate long and rich conversations, unexpected destinations, and perhaps a fair amount of wandering in the company of McCarthy’s protagonist. The journey is one in which both the past and the future become unstable and uncertain, making the book best enjoyed by sinking into the ruminative prose and savoring the ride.
Read Full Review >>
Rave Kirkus
An acclaimed African American essayist puts forth a first novel whose quirky romanticism, vivid landscapes, and digressive storytelling owe more to classic European cinema than conventional literature ... At times, even with McCarthy’s allusive style and illuminating observations carrying them along, readers may become unsettled by the drift and dysfunction of its protagonist. But if ever there was an example of a quest story where the quest matters more than the objective, it’s this coming-of-age novel. An intellectually stimulating fiction debut.
Read Full Review >>
See All Reviews >>
SIMILAR BOOKS
Fiction

The Ancestry of Objects
Tatiana Ryckman
Positive
What did you think of The Fugitivities?
© LitHub | Privacy